Five banks to pay billions and plead guilty in currency and interest rate cases. Barclays, RBS, Citi, JP Morgan and UBS forced to pay out over collusion by traders in several countries in another big blow to their reputations. 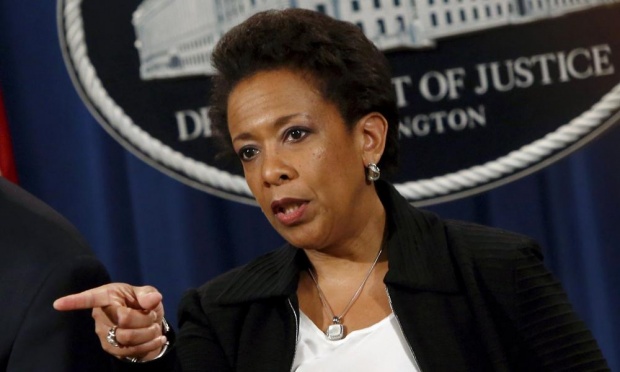 The US attorney general, Loretta Lynch, gets tough with ‘the cartel’ of international banks. Photograph: Jonathan Ernst/Reuters

The reputation of the banking industry took another hammering on Wednesday [20 May 2015] as record fines imposed on major banks – including Barclays and bailed-out Royal Bank of Scotland – for rigging foreign exchange markets topped £6.3bn. [€ 8.8bn] [US$ 9.86bn]

The US Department of Justice accused the industry of “breathtaking flagrancy” as, along with other regulators on both sides of the Atlantic, it imposed a record $5.7bn (£3.7bn) of punishments on six banks. The new fines followed£2.6bn of penalties announced in November for manipulation of the £3.5tn a day currency markets.

Barclays was fined £1.5bn by five regulators, including a record £284m by the UK’s Financial Conduct Authority. The FCA will hand its fine to the chancellor, George Osborne. Yet Barclays’ stock market value rose by £1.5bn as a result of a 3% rise in its share price amid relief the fine was not even larger. RBS’s shares also rose 1.8%. The increases came even though the regulators said there could be more fines to come.

An unprecedented series of guilty pleas was extracted by the US DoJ from four of the banks: Barclays, RBS, Citigroup and JP Morgan. Swiss bank UBS was granted immunity for being the first to report the manipulation of the foreign exchange markets, although it was forced to admit to wrongdoing in other offences. Bank of America was fined by the Federal Reserve.

Announcing the fines, Loretta Lynch, the US attorney general, said bank traders had exhibited “breathtaking flagrancy” in setting up a group they called “the cartel” to manipulate the market between 2007 and the end of 2013.

“The penalty these banks will now pay is fitting considering the long-running and egregious nature of their anticompetitive conduct. It is commensurate with the pervasive harm done. And it should deter competitors in the future from chasing profits without regard to fairness, to the law, or to the public welfare,” she said.

The banks, which have been hit by billions of pounds of Libor fines in the last three years and admit they face further penalties for rigging other markets such as metals, faced a torrent of criticism.

“This sort of practice strikes at the heart of business ethics and is yet another blow to the integrity of the banks. Our pension funds invest billions of pounds in the financial markets and if they are being cheated in this way, it affects every one of us,” said Mark Taylor, dean of Warwick Business School and a former foreign exchange trader.

Andrew McCabe, FBI assistant director, said: “These resolutions make clear that the US government will not tolerate criminal behaviour in any sector of the financial markets.”

Campaigners for a tax on financial transactions at the Robin Hood Tax campaign, said: “These colossal fines are a shocking reminder that for too long our banks have had a rotten core. In what other sector would we tolerate the frequency and severity of such damaging behaviour?”

Barclays was ordered to fire eight staff as part of a deal with the New York department of financial services – including a global head of trading – although other individuals are also expected to leave. Benjamin Lawsky, who is stepping down as the head of the New York DFS, said Barclays “engaged in a brazen ‘heads I win, tails you lose’ scheme to rip off their clients”.

The FCA said Barclays engaged in collusive behaviour with rivals and used chat rooms to manipulate rates secretly. In one chat room, a trader described himself and his fellow participants as “the three musketeers” and said “we all die together”.

Georgina Philippou, the FCA’s acting director of enforcement and market oversight, said of the Barclays fines: “This is another example of a firm allowing unacceptable practices to flourish on the trading floor.”

Top bankers lined up to offer apologies and their frustrations. Antony Jenkins, appointed to run Barclays in the wake of the 2012 Libor rigging scandal, said: “I share the frustration of shareholders and colleagues that some individuals have once more brought our company and industry into disrepute.”

As RBS was fined £430m – on top of the £400m of penalties announced in November – boss Ross McEwan said: “The serious misconduct that lies at the heart of today’s announcements has no place in the bank that I am building. Pleading guilty for such wrongdoing is another stark reminder of how badly this bank lost its way and how important it is for us to regain trust.”

RBS, which is 79% owned by taxpayers, warned it could still face further action and has fired three people and suspended two more.

Citigroup was fined £770m, while JP Morgan, the biggest bank in the US – which has paid fines totalling more than £26bn since 2009 – was fined another £572m. Its boss, Jamie Dimon, said: “The conduct described in the government’s pleadings is a great disappointment to us. We demand and expect better of our people. The lesson here is that the conduct of a small group of employees, or of even a single employee, can reflect badly on all of us, and have significant ramifications for the entire firm.”

Barclays also became the first bank to be fined for fixing another benchmark, known as the ISDAfix. It is paying £74m to the US regulator the Commodity Futures Trading Commission.

What Is Forex and Why Does It Matter?