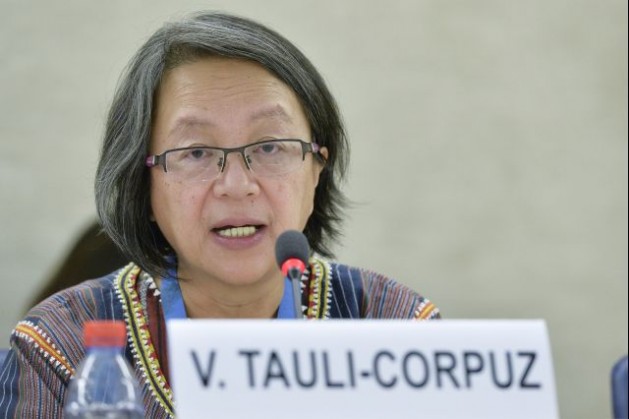 Apr 27 2015 – Frustrated with decades of marginalisation, and of seeing their rights respected only on paper, Indigenous peoples are calling for major recognition from the international community.

Speaking at U.N. Headquarters on Apr. 27 as part of the U.N. Permanent Forum on Indigenous Issues – which started last week and lasts through Friday [1 May 2015] – the U.N. Special Rapporteur on the Rights of Indigenous Peoples Victoria Tauli-Corpuz expressed disappointment with the scant efforts to enshrine Indigenous People’s rights in the post-2015 development agenda.

“It is very regrettable that out of the 17 (Sustainable Development) Goals, there is no reference to Indigenous People. This does not speak well for the U.N. and its member states,” she said.

Taking Indigenous knowledge and traditional technology into account internationally could contribute to solving many of the world’s major crises in relation to the environment and climate change, and ultimately bring sustainable development, stressed Tauli-Corpuz.

The right to land is a key issue for Indigenous People.

Recently Aboriginal communities in Australia have been forced to move outside their territories because the government decided to use the land for resource extraction activities, such as mining or oil drilling.

The Rights and Resources Initiative, a global coalition that works for the human and land rights of Indigenous People worldwide, says that, “When communities have rights to their land and natural resources, and rights to benefit from these resources through local enterprises and other activities, they can generate substantial income.”

This is also a relevant point raised at the U.N. briefing by Perry Bellegarde, National Chief of the Assembly of the First Nations in Canada.

“We need to develop a long-term partnership between the government and Indigenous people, who are vital and strategic in developing and bringing wealth to the land, by protecting it at the same time for future generations,” he said.

A positive example comes from southern Belize, where Indigenous People have reached an agreement with the government after three decades of struggling to secure their land rights.

Christina Coc, director and co-founder of the Julian Cho Society, represented the Maya villagers of Toledo in their negotiations with the government of Belize.

She explained that, “The Maya people have suffered from soil exploitation, land and water seizure from the government in the past years, and so they were determined in getting their rights recognised not only on papers, but in concrete terms.”