I. I will start off by saying I’m not indigenous to the islands, I’m not born and raised in Hawai‘i, I’m not even residing there right now, but on the pro-TMT side, it is those that are as well neither Kanaka Maoli nor long-term residents of Hawai‘i, who are the most self-righteous in their arguments for the construction. There is a certain fact they have no respect for or just refuse to understand.

I want to talk about the haole attitude in the pro-TMT debate. Take a look at the racist e-mail and non-apologies that came out of UC Berkeley and the astronomy community, defending their usually so harmless science as the sudden “bad guy” in this debate, when all they want is to see light years away to find the earth’s origins. In doing so, they silence the voice of Hawaiians, who state their origins from the coming together of the Earth Mother Papahānaumoku and the Sky Father Wākea as their first-born Mauna Kea. I want to talk about those who believe this is about going “back to the roots” and doing away with all technology, those who scoff at the mention of “sacred” and “spiritual”, and interpret it as “anti-science” and “anti-progress” to make a mockery of it.

It’s a blatant disrespect of Hawaiian beliefs. The desecration of Mauna Kea, when cultural practitioners and other protectors of the mauna have called it such, is further denial of the voice of a nation that has been oppressed by colonizers for over a century. Non-Kānaka Maoli are in no position to be laying any claim on these lands and what is to happen with them, while denying Hawaiian cultural expression and measuring it as of lesser value. This also isn’t a debate for “local” settlers, Asian and white, to take part in, if the only thing they have to say is that Hawaiian cultural beliefs don’t factor into this. They aren’t the ones who have ancestral ties to the land that is being desecrated. Questioning the verity of “sacredness” and describing the protectors as superstitious quacks, or comparing them to religious anti-science climate change deniers, comes from a place of cultural insensitivity, intolerance, and ignorance.

There is no separating the TMT construction, sovereignty, and Hawaiian cultural beliefs. The culture and the people are all a part of the ‘āina, and the rightful indigenous custodians of the land have been replaced by American legalities. Consequently, calls for decolonization of the land, of the people, of the mind, are all a part of this. This means that no matter how many generations settler colonists have been living in Hawai‘i, this is about the people who were there first and who have had their homelands taken away from them and their rights denied.

Here, I focus on the cultural oppression and erasure that came from it. Ethnocide, as it’s been called in these circumstances, which is fortunately on its way to being reversed since Hawaiian Renaissance in the 1970s. Hula was restricted, and is now a great attraction as the Merrie Monarch shows, but also a cultural practice of story-telling. ‘Ōlelo Hawai‘i was banned, and now immersion schools have led to more recent generations of Native Hawaiians fluent in it, and it is no longer feared to be an endangered language if this continues. Previous generations given Christian first names and Hawaiian second names are now being called by their Hawaiian names. A hale was built on the mauna by the protectors, oli were chanted, hula was performed, the community of solidarity is still growing in strength and in numbers.

Yet there are debates on authenticity of culture, what is customary Hawaiian, what is an ahistorical claim of it or a contemporary adaptation. Paragraphs of more legalities if the assertions of Mauna Kea as a spiritual place are according to Hawaiian tradition or not. On top of that, just this week one of the arrested protectors was led off the stands in the courtroom for speaking the native language, an official language of the land. How is that perpetuating the life of the land in righteousness? 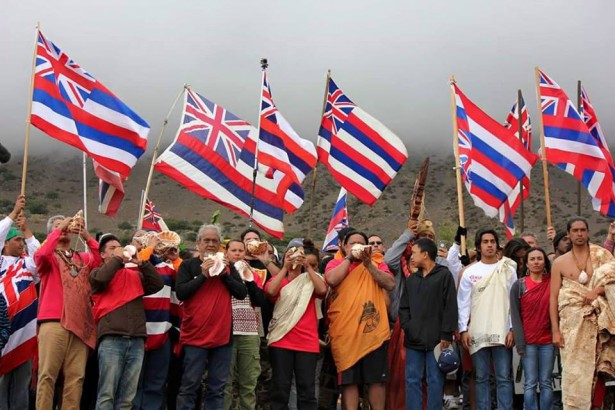 Mauna Kea protectors blow the Pū or conch shell to mark the beginning of a ceremony. (Facebook / We Are Mauna Kea)

II. As I said, I’m not talking about only white people as haole, nor are settler communities given a pass, I specifically mean haole as an attitude: the disrespectful behaviour and attitude some bring towards Hawaiian culture and beliefs. If you’re a guest in a house, you take off your shoes, you don’t move around the furniture, (“It’s a metaphor”), is what the UHM student in the YouTube video explained to his physics professor in her pro-TMT lecture. I was surprised to find out that the physics professor had already spent over a decade at UHM, this “Hawaiian place of learning” that granted me my graduate degree. Much like I was surprised when in my first year in Hawai‘i, a friend who had lived there for more than five times as long, said she had never heard about Hawaiians being descended from kalo. How wasn’t that common knowledge by now? Because they weren’t taught this, or because they didn’t care?

Maybe I was lucky enough to not have been born white (or a man), so I never got “haole” yelled at me in Hawai‘i for simply my appearance. Then again, that’s the only time not being white (and a man) has ever been an advantage and would be considered lucky. As a newcomer to the islands, you’re more likely to be criticized as haole by someone for your behaviour, not just for your appearance. There’s a difference between stating the fact of being haole and the insult of being a fucking idiot haole. There’s a difference between born-and-raised local haole and those who complain about “racism”. Those that have spent enough time in Hawai‘i have learned to be more humble, they are born into or adjust to the local lifestyle with a sense of respect and humility.

But this isn’t about being “local” to the islands, this is about being sprung from the kalo and the earth. This is about defining oneself and one’s culture from the life of the land, the kama‘āina. The concept of cultural identity being tied to the land is shared with many indigenous cultures, and it is also a concept that has many haole in disbelief over why relocation or paying for legal access to land isn’t considered a fair trade-off. It happens over and over worldwide for mining projects, the logging industry and other deforestation, or whatever is judged to be for the sake of “development”. Environmental factors play a role, but it’s often the hardest to explain the connection to the land that is lost. Ecological costs can be measured, but how do you quantify the spiritual loss of the land, the loss of one’s self?

This really isn’t the responsibility of Kānaka Maoli to have to explain to others. If it’s too difficult a concept for you to understand, you should have no say in this matter. If you do understand, you respectfully accept that there is no fair trade-off to be argued over. 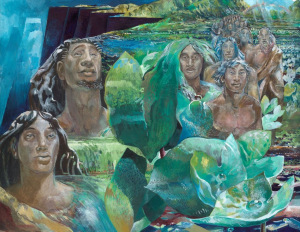 III. What is my personal concern to this debate? My piko wasn’t brought to Lake Waiau, my kūpuna haven’t been going up Mauna Kea to pule for generations, my genealogy isn’t connected to the Hawaiian Islands in any way. I’m speaking up, because for all the complaints I have heard about “reverse racism” and how unwelcoming Hawaiians and locals are, I have to disagree. Hawai‘i is in fact the only place I have lived in, out of more than half a dozen on several continents, where I could feel most welcome.

Those arguing that Hawaiian belief in the sacredness of Mauna Kea is irrelevant or outlandish, are the same people that have argued with me about perceiving racism in Hawai‘i and that then go and make statements that insult the host culture:

If Hawai‘i had never been colonized or would become independent now, what about all the development that has benefitted Hawaiians or they’d be living like those other islands, yes, of course, even the homeless Hawaiians are far happier than any child in the Congo could be, thanks to the money and progress the Americans have brought.

This was said to me in the person’s unyielding conviction that he was in fact talking to a Native Hawaiian, as much as I argued that no, I wasn’t.

Attitudes like this are given a voice at UHM, especially in the sciences. They have deliberately talked down to me being certain I was Hawaiian, and have made this my concern as well. If it’s all in the name of bettering the education of Native Hawaiian students, as they are now saying repeatedly, it won’t work by rejecting Hawaiian philosophies and calling them “anti-science” to promote their cause. Wouldn’t the money be much better put to use in Hawai‘inuiakea, if it’s really supposed to benefit the education and future generations of Kānaka Maoli, rather than in the astronomy research of a consortium of outside schools and associations.

There is solidarity with the Mauna Kea protectors from Native Americans and other indigenous peoples. Solidarity and support from local settlers, other residents, and visitors, and perhaps some who may have had no previous links to Hawai‘i. This movement to stop the TMT isn’t only “a horde of native Hawaiians who are lying about the impact of the project”, as high-profile astronomers Sandy Faber and Alexei Filippenko would have liked their colleagues to believe.

Exactly 12 time zones away I sit here writing/posting/re-sharing pictures/articles/e-mails on #WeAreMaunaKea. Those who say it’s only a few (violent) dissenters are obviously ignoring the petitions with over 50k signatures or the social media discussion groups with over 15k in attendance.

There is global support, even if it’s simply spreading awareness with hashtag selfies, or posting leaked racist e-mails on social media, or assisting in writing press releases to other activists and international news outlets to counter the local media bias. So then others on the ground can immediately launch retaliatory e-mails and demand explanations for condescending remarks, organize meetings and sign-waving protests, testify before OHA against the lack of support in these Hawaiian affairs, come together and build ahu at the “Hawaiian place of learning” that approved this project, and physically stand in the protection of Mauna Kea.

Karin Louise Hermes has an M.A. in Pacific Islands Studies from the University of Hawai‘i at Mānoa with a focus on cultural identities and national consciousness.