The astonishing, multiple crises caused by chicken farming. Whether it’s welfare standards, environmental impact or the emerging threat to human health, we’ve got to change our insatiable greed for this meat. 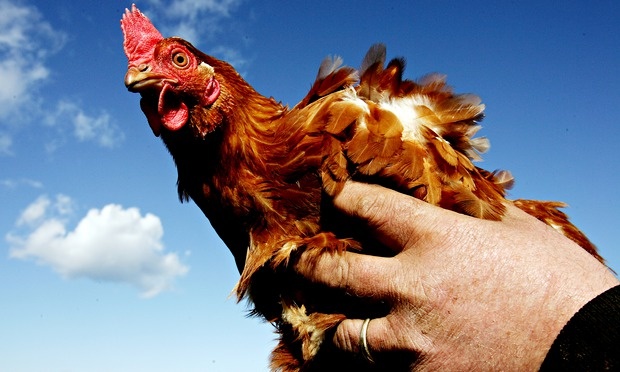 ‘Is it too much to ask that we should eat meat as our grandparents did, as ­something special, rather than as ­something we happen to be stuffing into our faces while reading our emails?’ Photograph: Graeme Robertson

19th May 2015 – It’s the insouciance that baffles me. To participate in the killing of an animal: this is a significant decision. It spreads like a fungal mycelium into the heartwood of our lives. Yet many people eat meat sometimes two or three times a day, casually and hurriedly, often without even marking the fact.

I don’t mean to blame. Billions are spent, through advertising and marketing, to distract and mollify, to trivialise the weighty decisions we make, to ensure we don’t connect. Even as we search for meaning and purpose, we want to be told that our actions are inconsequential. We seek reassurance that we are significant, but that what we do is not.

It’s not blind spots we suffer from. We have vision spots, tiny illuminated patches of perception, around which everything else is blanked out. How often have I seen environmentalists gather to bemoan the state of the world, then repair to a restaurant in which they gorge on beef or salmon? The Guardian and Observer urge us to go green, then publish recipes for fish whose capture rips apart the life of the sea.

The television chefs who bravely sought to break this spell might have been talking to the furniture. Giant chicken factories are springing up throughout the west of England, the Welsh Marches and the lowlands of the east. I say factories for this is what they are: you would picture something quite different if I said farm; they are hellish places. You might retch if you entered one, yet you eat what they produce without thinking. 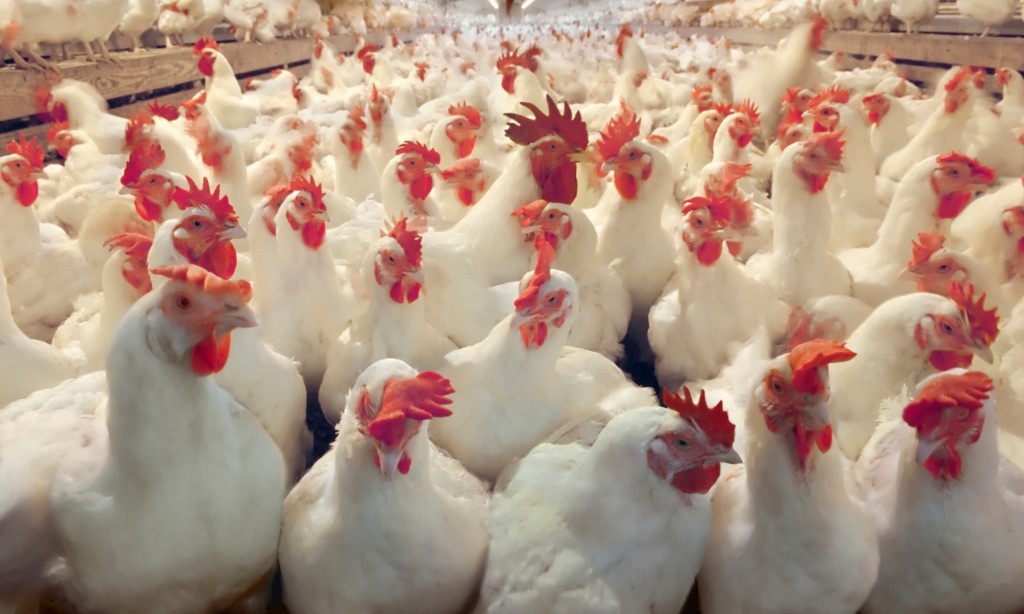 Giant chicken factories are springing up throughout the west of England, the Welsh marches and the lowlands of the east.

Two huge broiler units are now being planned to sit close to where the River Dore rises, at the head of the Golden Valley in Herefordshire, one of the most gorgeous landscapes in Britain. Each shed at Bage Court Farm – warehouses 90 metres long – is likely to house about 40,000 birds, that will be cleared out, killed and replaced every 40 days or so. It remains to be seen how high the standards of welfare, employment and environment will be.

The UK now has some 2,000 of these factories, to meet a demand for chicken that has doubled in 40 years*. Because everything is automated, they employ few people, and those in hideous jobs: picking up and binning the birds that drop dead every day, catching chickens for slaughter in a flurry of shit and feathers, then scraping out the warehouses before the next batch arrives.

The dust such operations raise is an exquisite compound of aerialised faeces, chicken dander, mites, bacteria, fungal spores, mycotoxins, endotoxins, veterinary medicines, pesticides, ammonia and hydrogen sulphide. It is listed as a substance hazardous to health, and helps explain why 15% of poultry workers suffer from chronic bronchitis. Yet, uniquely in Europe, the British government classifies unfiltered roof vents on poultry sheds as the “best available technology”. If this were any other industry, it would be obliged to build a factory chimney to disperse the dust and the stink. But farming, as ever, is protected by deference and vested interest, excused from the regulations, planning conditions and taxes other business must observe. Already, Herefordshire County Council has approved chicken factories close to schools, without surveying the likely extent of the dust plumes either before or after the business opens. Bage Court Farm is just upwind of the village of Dorstone.

Inside chicken factories are scenes of cruelty practised on such a scale that they almost lose their ability to shock. Bred to grow at phenomenal speeds, many birds collapse under their own weight, and lie in the ammoniacal litter, acquiring burns on their feet and legs and lesions on their breasts. After slaughter they are graded. Those classified as grade A can be sold whole. The others must have parts of the body removed, as they are disfigured by bruising, burning and necrosis. The remaining sections are cut up and sold as portions. Hungry yet?

Plagues spread fast through such factories, so broiler businesses often dose their birds with antibiotics. These require prescriptions but – amazingly – the government keeps no record of how many are issued. The profligate use of antibiotics on farms endangers human health, as it makes bacterial resistance more likely.

But Herefordshire, like other county councils in the region, scarcely seems to care. How many broiler units has it approved? Who knows? Searches by local people suggest 42 in the past 12 months. But in December the council claimed it has authorised 21 developments since 2000§. This week it told me it has granted permission to 31 since 2010. It admits that it “has not produced any specific strategy for managing broiler unit development”¤. Nor has it assessed the cumulative impact of these factories. At Bage Court Farm, as elsewhere, it has decided that no environmental impact assessment is neededɷ.

So how should chicken be produced? The obvious answer is free range, but this exchanges one set of problems for another. Chicken dung is rich in soluble reactive phosphate. Large outdoor flocks lay down a scorching carpet of droppings, from which phosphate can leach or flash into the nearest stream. Rivers like the Ithon, in Powys, are said to run white with chicken faeces after rainstorms. The River Wye, a special area of conservation, is blighted by algal blooms: manure stimulates the growth of green murks and green slimes that kill fish and insects when they rot. Nor does free range solve the feed problem: the birds are usually fed on soya, for which rainforests and cerrado on the other side of the world are wrecked.

There is no sensible way of producing the amount of chicken we eat. Reducing the impact means eating less meat – much less. I know that most people are not prepared to stop altogether, but is it too much to ask that we should eat meat as our grandparents did, as something rare and special, rather than as something we happen to be stuffing into our faces while reading our emails? To recognise that an animal has been sacrificed to serve our appetites, to observe the fact of its death, is this not the least we owe it?

Knowing what we do and what we induce others to do is a prerequisite for a life that is honest and meaningful. We owe something to ourselves as well: to overcome our disavowal, and connect.