In Imitation of Christ: Pope Francis’ Encyclical on Climate Change

Small yet strong in the love of God, like Saint Francis of Assisi, all of us, as Christians, are called to watch over and protect the fragile world in which we live, and all its peoples 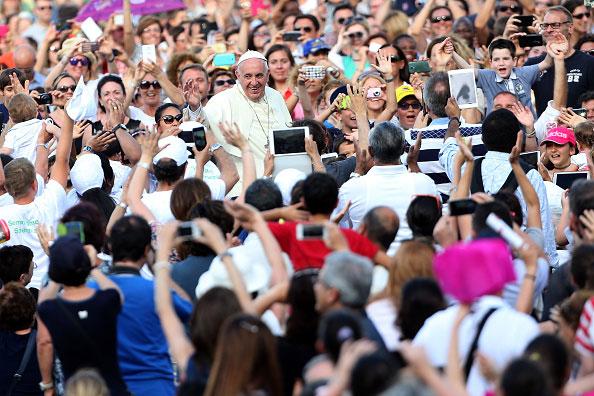 This sentence from Pope Francis’ November 2013 apostolic exhortation Evangelii Gaudium (The Joy of the Gospel) provides important clues about the pope’s self-identity and the likely message of his upcoming encyclical. Scheduled for release on June 18, the encyclical will be titled “Laudato Si” (or “Praised Be”), a reference to St. Francis’ “Canticle of Creatures,” which gives thanks for all that God has created.

The environmental encyclical will follow on the heels of an April 28 declaration by world leaders who met for a climate change workshop at the Pontifical Academies of Sciences and Social Sciences. That statement warned that the United Nations climate change conference in Paris later this year “may be the last effective opportunity to negotiate arrangements that keep human-induced warming below 2 degrees C, and aim to stay well below 2 degrees C for safety, yet the current trajectory may well reach a devastating 4 degrees C or higher.”

Although the pope clearly hopes to influence the outcome of the Paris conference, he speaks with authority on divine matters in a way that is very different from politicians, climate scientists, and non-religious think tanks. Yet it is important to stress that his message of human responsibility for creation is not new. It is simply receiving a new and timely emphasis, along with the special charism that Francis believes he bears. Like his predecessors, Francis views creation care as integral to what it means to be a true follower of Christ.

Theological wisdom. We can find hints of this view in Pope Francis’ first encyclical Lumen Fidei (Light of Faith), a June 2013 letter that owes a heavy debt to Pope Benedict XVI. Here Francis reminds his readers that God, as Father, is author of all creation, and salvation in Christ is offered not just to humanity; it is a salvation that “embraces all of humanity and all creation.” Therefore, citing the Psalms: “All creation shares in the joy of salvation: ‘Sing for joy, O heavens, and exult, O earth! Break forth, O mountains, into singing! For the Lord has comforted his people, and will have compassion on his suffering ones.’”

And lest readers forget that the gift of creation is woven into every celebration of the Mass, Pope Francis also spells out how each person’s own inner conversion through the Eucharist is bound up with the tapestry of creation itself, so “The bread and wine are changed into the body and blood of Christ, who becomes present in his passover to the Father: this movement draws us, body and soul, into the movement of all creation towards its fulfillment in God.”

The ecological mandate for humanity. Such insights are not simply theologically significant, they also have a profound impact on specific human responsibilities. Once human beings lose a sense of connectedness to God, each other, and the Earth, destructive tendencies follow, wrote Francis in that first encyclical, and a person is “cast adrift in nature, either renouncing his proper moral responsibility or else presuming to be a sort of absolute judge, endowed with an unlimited power to manipulate the world around him.”

The idea that creation is a gift is also very significant, not just because it allows humans to experience spiritual wonder and awe at the beauty of the Earth, but also because it leads to specific responsibilities regarding how development is conceived in various nations. Francis urges “models of development which are based not simply on utility and profit, but consider creation as a gift for which we are all indebted; it teaches us to create just forms of government, in the realization that authority comes from God and is meant for the service of the common good.” This is in keeping with Pope Benedict XVI’s criticisms of “superdevelopment” and excessive capitalistic growth for profit, though the precise way in which integral development might be worked out is still left somewhat vague.

Paris 2015. Pope Francis reiterated this message, with specific reference to climate change, at a press conference on his way to Manila on January 15, when he declared: “I don’t know if it is all [humankind’s fault] but the majority is, for the most part, it is man who continuously slaps down nature … We have, in a sense, lorded it over nature, over Sister Earth, over Mother Earth … I think man has gone too far … Thank God that today there are voices that are speaking out about this.”

The references to Sister Earth and Mother Earth echo the language of Saint Francis of Assisi’s “Canticle of the Creatures.” They are a reminder that at the root of any response to climate change is recognition of a profound kinship and interconnection between humanity and the Earth.

In the lead-up to the Paris summit on climate change in 2015, we can expect Pope Francis to treat the matter with grave seriousness. In his January 12 address to the members of the diplomatic corps accredited to the Holy See, he stated: “The drafting of a new climate change agreement … is urgently needed.” He said this in the context of speaking about development issues, so it is likely that he had social justice issues and poverty uppermost in his mind. But he also noted the political significance of climate negotiations: “The indispensable presupposition of all these is peace, which, even more than an end to all wars, is the fruit of heartfelt conversion.” In other words, peace making is the basis on which international agreements can be sought and made binding, and arriving at peace requires a change of heart and mind. The stakes are therefore high in coming to a lasting and binding agreement.

Beyond the church. Is the pope leaving out those outside the Catholic faith? I don’t think this is the case, for he is generous in his inclusiveness. Indeed, even in The Joy of the Gospel, Francis exhorts Christians to “feel close to those who do not consider themselves part of any religious tradition, yet sincerely seek the truth, goodness and beauty which we believe have their highest expression and source in God.” He recognizes that those in such a position are also “precious allies in the commitment to defending human dignity, in building peaceful coexistence between peoples and in protecting creation.”

Finally, it is important to note that the pope’s emphasis on the weak and defenseless includes creatures of all kinds in an integral ecology, so he is more aware than his predecessors of the deep entanglement between living things. “Thanks to our bodies, God has joined us so closely to the world around us that we can feel the desertification of the soil almost as a physical ailment, and the extinction of a species as a painful disfigurement,” Francis writes in The Joy of the Gospel. In his view, this connection is significant not just for human flourishing now, but for future generations as well: “Let us not leave in our wake a swath of destruction and death.”

Perhaps this will mean that the Paris climate conference, intended to achieve a legally binding international agreement on climate,will be concerned with ecological justice as well as environmental justice, given the massive extinctions that are already happening. And if his listeners absorb what Pope Francis says and make it their own, they will have a renewed sense of hope that another world is possible. The importance of his message is not just for Catholics, but also for powerful leaders in their political deliberations in Paris—which the whole world will be watching.

Celia Deane-Drummond is a professor of theology at the University of Notre Dame. She earned a doctorate in plant physiology and now focuses on the intersection of theology and the biological sciences. She has lectured widely on environmental ethics and has authored or edited 22 books, including Seeds of Hope: Facing the Challenge of Climate Justice (CAFOD, 2009). She is inaugural director of the Center for Theology, Science, and Human Flourishing.