30 May 2015 – The University of Sydney has found no grounds to dismiss Associate Professor Jake Lynch as director of the university’s Centre for Peace and Conflict Studies, following its investigation into possible breaches of its code of conduct.

Lynch will keep his job and has been cleared of serious misconduct after an investigation into a campus protest left him facing dismissal.

This follows an announcement by the university in April clearing Lynch of accusations of anti-Semitism.

Lynch has been the subject on an ongoing campaign for his dismissal from the university in Jewish and mainstream press, particularly the Murdoch press over his support for the Boycott, Divestments, and Sanctions (BDS) movement

Lynch, five student protesters, two security guards who forcibly removed protesters from the lecture theatre and five members of the public, were sent letters outlining a range of allegations of misconduct after a lecture delivered by Israeli Colonel Richard Kemp was interrupted by pro-Palestinian protesters on March 11. One of the members of the public investigated by the university was 73-year-old Diane Barkas, who was filmed slapping, kicking and pouring water over Lynch. 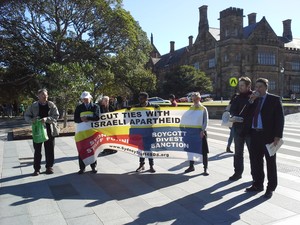 A protest at the University of Sydney demands it cut ties with Israeli institutions.

The university said in a statement on May 26: “A number of members of the University community and the public were found to have engaged in unsatisfactory conduct, as a result of which disciplinary action, including counselling, warning and suspension of access rights to the University grounds have been imposed.”

Lynch told New Matilda he was “delighted and relieved to be cleared of serious misconduct and that the threat to my position at the university has been lifted.

“I pay tribute to the vigorous and effective campaign to mobilise right thinking opinion against the vexatious and insubstantial allegations against me — in particular the slur of anti-Semitism which has been comprehensively refuted.”