On Balance and the Necessary Excesses of Life

On Being Too Much for Ourselves – “There are situations in which it is more dangerous to keep your balance than to lose it.” 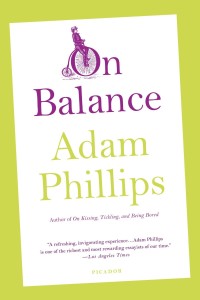 “Something is always born of excess,” Anaïs Nin wrote in her diary in June of 1945 as she contemplated the value of emotional excess, adding: “Great art was born of great terrors, great loneliness, great inhibitions, instabilities, and it always balances them.” And yet our compulsive pursuit of balance — take, for instance, the tyrannical notion of work/life balance — is predicated on eradicating “excess,” pitting it as a counterpoint rather than a complement to equilibrium and inner wholeness.

That paradoxical relationship is what the celebrated psychoanalyst and writer Adam Phillips examines in On Balance (public library) — a marvelous collection of essays on “the balancing acts that modern societies involve us in,” exploring the many myths that bedevil our beliefs about balance and impede our pursuit of it.

With an eye to John Stuart Mill’s 1834 proclamation that “there seems to be something singularly captivating in the word balance, as if, because anything is called a balance, it must, for that reason, be necessarily good,” Phillips writes:

The people we fall in love with we find singularly captivating, as are any of the people (or ideas) that inspire us, for better or for worse. What is strange about Mill’s simple observation is that it is the singularly captivating that tends to make us lose our balance. Mill intimates with his peculiar logic that the idea of balance can unbalance us. 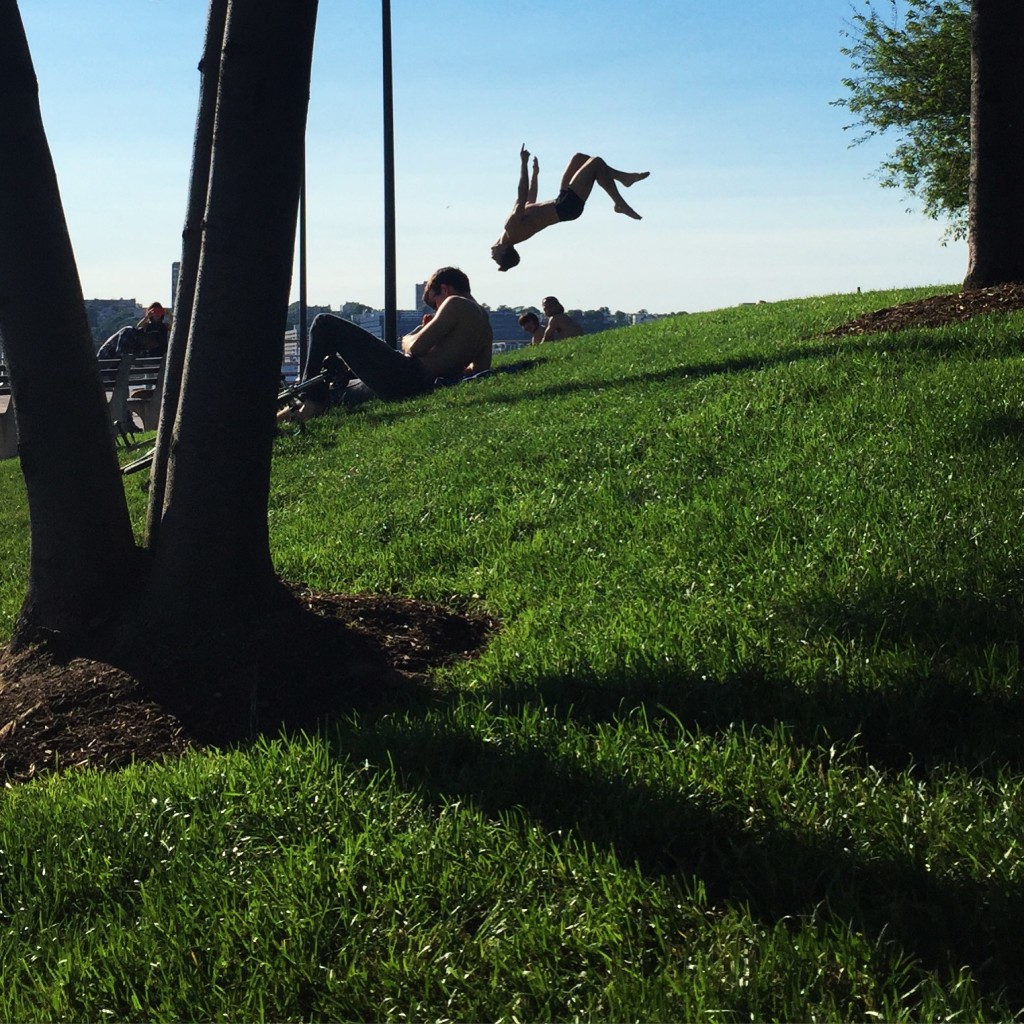 Like anger, beneath which David Whyte has so poetically observed lies an indication of what really matters to us, these unbalancing acts, Phillips argues, are a vital and indicative part of our aliveness:

We should not, perhaps, underestimate our wish to lose our balance, even though it’s often easier to get up than to fall over. Indeed, the sign that something does matter to us is that we lose our steadiness.

Phillips considers the necessary excess of optimism and why an artificial balance is sometimes more dangerous than surrendering to such “singularly captivating” loss of steadiness:

We can only be really realistic after we have tried our optimism out. It is not always clear in which areas of our lives it is realistic (or even optimistic) to aspire to the balanced view; or indeed in which parts of our lives the balanced view helps us to get the lives that we want. Balancing acts are entertaining because they are risky, but there are situations in which it is more dangerous to keep your balance than to lose it. 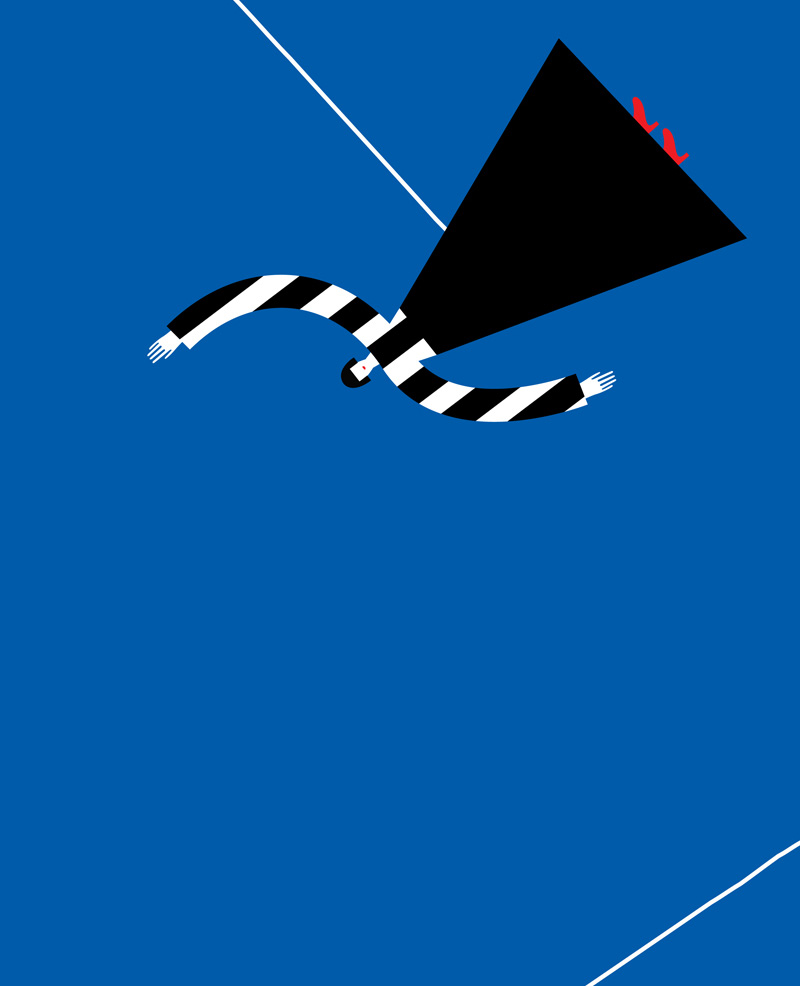 In one of the most rousingly and rewardingly unbalancing essays in the book, titled “On Being Too Much for Ourselves,” Phillips considers an especially anguishing aspect of our relationship with excess, fueled largely by our pathological busyness. Phillips, who has previously explored the crucial role of “fertile solitude” in cultivating self-reliance, writes:

It is not unusual for us to feel that life is too much for us. And it is not unusual to feel that we really should be up to it; that there may be too much to cope with — too many demands — but that we should have the wherewithal to deal with it. Faced with the stresses and strains of everyday life it is easy now for people to feel that they are failing; and what they are failing at, one way or another, is managing the ordinary excesses that we are all beset by: too much frustration, too much bad feeling, too little love, too little success, and so on. One of the things people most frequently say in psychoanalysis is, ‘Perhaps I am overreacting, but . . .’; and one of the commonest complaints today is about feeling too much or feeling too little. I want to suggest that we are simply too much for ourselves, but that this too-muchness is telling us something important… My proposition is that it is impossible to overreact. That when we call our reactions overreactions what we mean is just that they are stronger than we would like them to be. In other words, we sometimes call ourselves and other people excessive as a way of invalidating or tempering the truths we tell ourselves or that other people tell us. It is impossible to overreact.

Our choice of language often betrays our repressed reactions more than we realize, but never more so than in Freudian slips — those awkward moments when our words inadvertently reveal what we mean but didn’t intend to say. Phillips considers this particularly common and colorful example of overreaction:

When we make Freudian slips we try to cover our tracks by claiming that we have said more than we mean, when in fact we have meant more than we had wanted to say… We may feel like we are saying too much, but we may be saying just the right amount; adding things to the conversation that are worth talking about and trying out. We can’t decide not to make Freudian slips; but even when we use ordinary language intentionally, we often say more than we intend. If I say to you that I am a great admirer of your work, I am telling you about my greatness as well as yours; when I say, “See you tomorrow,” I am assuming I know what isn’t going to happen in the interim. Our language, without which we couldn’t imagine our lives, is too much for us in the sense that it can surprise us: we hear in it — and we say in it — more than we intend to. And more than we attend to.

Phillips looks at how our early childhood — those “years of intense feeling” — shapes our aversion to excess and gives rise to our compulsive quest for composure, control, and intentional organization with which to disguise our deep inner shame of being seen as “overreacting”: 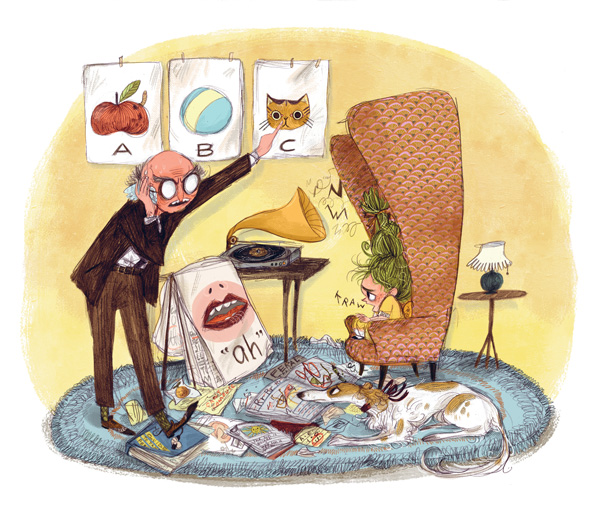 Illustration by Emily Hughes from ‘Wild.’

What we do, Phillips points out, is begin to see this excess as badness — we aren’t simply “too much,” but too much of something undesirable, uncomfortable-making, and ultimately dangerous:

The child who experiences himself as being too much for his parents — all children to some extent — experiences himself as in some way harming them. And as the child’s survival depends upon his parents, or those who look after him, this puts him in mortal danger. For this reason alone it is very difficult for the child — and for the adult that he will become — to think of his too-muchness as anything other than a problem. And yet, of course, parents are there to absorb, and be absorbed in, their children’s excesses (and vice versa). Indeed, people know that they are in a relationship when they become a problem to each other (or, to put it slightly differently, if you want to have a relationship with someone you have to become a problem for them).

Nin, it turns out, was right after all — great excess is necessary for great works of art, and what greater an art than that of human relationships? Phillips captures this necessary too-muchness beautifully:

We are too much for ourselves because there is far more to us — we feel more — than we can manage.

The piercing precision of insight in the example with which Phillips illustrates this took my breath away, for one of my most vivid childhood memories is a newscast in my grandparents’ living room announcing the death of Princess Diana, which instantly sent me into an inexplicable spiral of sobbing grief for a stranger’s tragic fate. Phillips, however, argues this experience is quite explicable for the very same reasons — it bespeaks the uncomfortable too-muchness of our emotional capacity:

People didn’t overreact to the death of Diana; through the death of Diana they recognized just how much grief they were bearing, how much loss they had suffered in their lives, how they felt about the fate of young women in our culture. Indeed, grief, rather like sexuality, reminds us just how much we are too much for ourselves, how intense our loves and longings really are.

We are too much for ourselves — in our hungers and our desires, in our griefs and our commitments, in our loves and our hates — because we are unable to include so much of what we feel in the picture we have of ourselves. The whole idea of ourselves as excessive exposes how determined we are to have the wrong picture of what we are like, of how fanatically ignorant we are about ourselves.

It is in adolescence, Phillips argues, that we first begin to play with the boundaries of excess, feeling out what we might be capable of and contemplating — sometimes experiencing — its consequences. Indeed, that precipice of maturity is itself “singularly captivating” in both promise and peril. Phillips writes:

Adolescence — when children begin to have the physical capacity to murder and conceive — is our more conscious initiation into those very excesses that make us who we are; and, of course, who we might become. Adolescents are excessive compared with the children they once were and the adults they are supposed to become. But adolescence, at least for modern people, seems to be peculiarly difficult to grow out of.

Instead of growing out of it, Phillips argues, we come to fetishize it — something glaringly evident in our youth-centric, youthfulness-obsessed culture, where a dignified relationship with aging is increasingly elusive. That cult, Phillips suggests, springs from envying the very excesses of adolescence:

The contemporary idealization of adolescence is telling us something about how we manage our complicated feelings about being too much for ourselves. 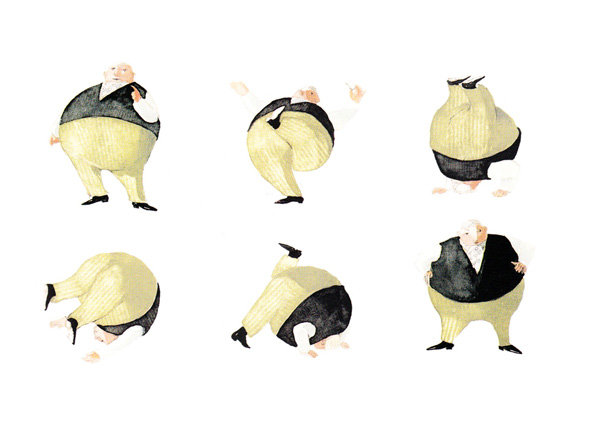 Illustration by Lisbeth Zwerger for ‘Alice in Wonderland.’

And with this he returns to the essential what-to-do question of living with our all too human, all too vital imbalances:

On Balance is a pleasurably discombobulating read in its totality. Complement it with Phillips on why the capacity for boredom is essential for a full life, Martha Nussbaum on how to live with our human fragility, and David Whyte on the true meanings of friendship, love, and heartbreak.