Stop Calling the TPP a Trade Agreement – It Isn’t. 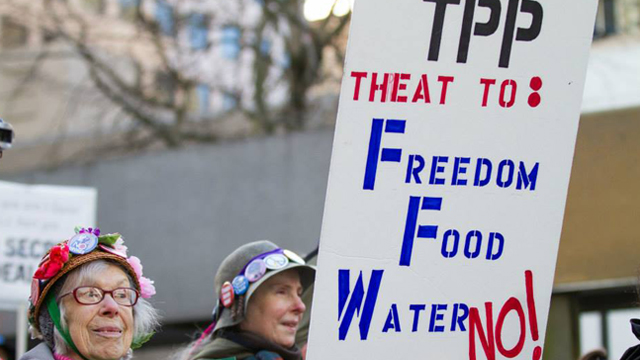 This is a message to activists trying to fight the Trans-Pacific Partnership (TPP). Stop calling the TPP a “trade” agreement. TPP is a corporate/investor rights agreement, not a trade agreement. Trade is a good thing; TPP is not. Every time you use the word trade in association with the TPP, you are helping the other side.

Trade is a propaganda word. It short-circuits thinking. People hear trade and the brain stops working. People think, “Of course, trade is good.” And that ends the discussion.

Calling TPP a trade agreement lets the pro-TPP people argue that TPP is about trade instead of what it is really about. It diverts attention from the real problem. It enables advocates to say things like, “95 percent of the world lives outside the US” as if that has anything to do with TPP. It lets them say, “We know that exports support American jobs” to sell a corporate rights agreement. It enables them to say nonsense like this about a corporate rights agreement designed to send American jobs to Vietnam so a few “investors” can pocket the wage difference: “Exports of US goods and services supported an estimated 9.8 million American jobs, including 25 percent of all manufacturing jobs … and those export-supported jobs pay 13 to 18 percent higher than the national average wage.”

Trade is good. Opening up the border so you can get bananas and they can get fertilizer is trade because they have a climate that lets them grow bananas and you already have a fertilizer plant. Enabling companies to move $30/hour jobs to countries with $.60/hour wages so a few billionaires can pocket the difference is not trade.

TPP Is a Corporate/Investor Rights Agreement

TPP is a corporate/investor rights agreement, and that is the problem.

TPP extends patents, copyrights and other monopolies so investors can collect “rents.”

While giving corporations a special channel to sue governments, labor, environmental, consumer and other “stakeholder” organizations do not get a channel for enforcement. This helps enable corporations to break unions, force wages down and pollute without cost. This increases the power of corporations over governments – and us.

Paul Krugman, “This Is Not A Trade Agreement”:

One thing that should be totally obvious, however, is that it’s off-point and insulting to offer an off-the-shelf lecture on how trade is good because of comparative advantage, and protectionists are dumb. For this is not a trade agreement. It’s about intellectual property and dispute settlement; the big beneficiaries are likely to be pharmaceutical companies and firms that want to sue governments.

Josh Bivens at the Economic Policy Institute (EPI), in “No, the TPP Won’t Be Good for the Middle Class”:

…TPP (like nearly all trade agreements the US signs) is not a ‘free trade agreement’ — instead it’s a treaty that will specify just who will be protected from international competition and who will not. And the strongest and most comprehensive protections offered are by far those for US corporate interests. Finally, there are international economic agreements that the United States could be negotiating to help the American middle class. They would look nothing like the TPP.

Jim Hightower, “The Trans-Pacific Partnership is not about free trade. It’s a corporate coup d’etat – against us!”:

TPP is a ‘trade deal’ that mostly does not deal with trade. In fact, of the 29 chapters in this document, only five cover traditional trade matters!

The other two dozen chapters amount to a devilish ‘partnership’ for corporate protectionism. They create sweeping new ‘rights’ and escape hatches to protect multinational corporations from accountability to our governments… and to us.

On OurFuture.org, “Economist Jeffrey Sachs Says NO to the TPP and the TAFTA Trade Treaties”:

Without touching on the unpopular Fast-Track mechanism necessary to pass these two treaties, Sachs laid out five reasons why, on the substance, they should not be passed or ratified:

Josh Barro, “But What Does the Trade Deal Mean if You’re Not a Cheesemaker?”:

Much of the controversy is because the TPP isn’t really (just) a trade agreement. (There’s a reason I called it an ‘economic agreement’ at the top.) A lot of it is about labor, environmental standards, intellectual property and access to markets for services like banking and accounting. And in contrast with the tariff cuts, there’s a lot more reason to worry that some of the agreement’s non-trade provisions would hurt the world economy even as they benefited specific industries.

Techdirt, “If You Really Think TPP Is About ‘Trade’ Then Your Analysis Is Already Wrong”:

Instead, trade agreements have become a sort of secret playground for big corporations to abuse the process and force favorable regulations to be put in place around the globe.

… If you make the facile assumption that the TPP is actually about free trade, then you might be confused about all the hubbub about it. If you actually take the time to understand that much of what’s in there has nothing to do with free trade and, in fact, may be the opposite of free trade, you realize why there’s so much concern.

Timothy B. Lee at Vox, “The Trans-Pacific Partnership is great for elites. Is it good for anyone else?”:

In the past, debates about trade deals have mostly been about trade. … In contrast, debates over the TPP mostly haven’t focused on its trade provisions.

[. . .] As the opportunities for trade liberalization have dwindled, the nature of trade agreements has shifted. They’re no longer just about removing barriers to trade. They’ve become a mechanism for setting global economic rules more generally.

… We expect the laws that govern our economic lives will be made in a transparent, representative, and accountable fashion. The TPP negotiation process is none of these — it’s secretive, it’s dominated by powerful insiders, and it provides little opportunity for public input.

The Trans Pacific Partnership is a notorious, secretly negotiated trade deal; from leaks we know that it continues ‘Investor State Resolution’ clauses that allow foreign companies to sue to overturn national labor and environmental laws. Johnson’s analysis stresses that trade agreements can be good for countries, but they aren’t necessarily good — and when they’re negotiated in secret, they rarely go well.

Stop calling TPP a trade agreement. It is a corporate/investor rights agreement.

Dave Johnson is a fellow with Campaign for America’s Future and a senior fellow with Renew California.

This post first appeared at Campaign for America’s Future.