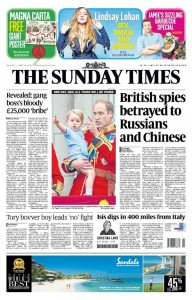 This weekend’s Sunday Times ran an article under the headline, “British spies betrayed to Russians and Chinese,” citing numerous anonymous sources from within the government and security services.

The sources once again painted a picture of Edward Snowden having endangered the lives of spies and informants, jeopardising state operations. The Times article was replete with unfounded assertions, distortions and outright lies.

Both Russia and China were said to “have cracked the top-secret cache of files stolen by the fugitive US whistleblower Edward Snowden, forcing MI6 to pull agents out of live operations in hostile countries, according to senior officials in Downing Street, the Home Office and the security services.”

Moscow was supposed to have “gained access to more than 1m classified files,” after Snowden “fled to seek protection from Vladimir Putin, the Russian president.”

“Senior government sources” then “confirmed that China had also cracked the encrypted documents.”

A “senior Home Office source” accused Snowden of having “blood on his hands”, “although,” the Sunday Times immediately added, “Downing Street said there was ‘no evidence of anyone being harmed’.”

The only named source, Sir David Omand, the former director of GCHQ, called Russia and China’s supposed de-encryption of Snowden’s files a “huge strategic setback” that was “harming” to Britain, America and their NATO allies.

The Sunday Times claimed that a comment made by a “senior Downing Street source,” i.e., from the prime minister’s office, “that Russians and Chinese have information,” represented irrefutable proof of the veracity of the claims. It was, moreover, “the first evidence that Snowden’s disclosures have exacted a human toll”.

This was followed by another “senior Home Office source” declaring, “Why do you think Snowden ended up in Russia? Putin didn’t give him asylum for nothing. His documents were encrypted but they weren’t completely secure and we have now seen our agents and assets being targeted.”

All of which goes to prove the old adage, “If you tell a lie, tell a big one and stick to it.”

Glenn Greenwald, who worked closely with Snowden, issued a devastating rebuttal of the Sunday Times, noting, “The whole article does literally nothing other than quote anonymous British officials,” while offering “zero evidence or confirmation for any of its claims.”

He noted several particularly glaring falsehoods: When Snowden left Hong Kong, he took no files with him, having given them to the journalists with whom he worked, and then destroying his copy so that it wouldn’t be vulnerable as he travelled. “How, then, could Russia have obtained Snowden’s files as the story claims—‘his documents were encrypted but they weren’t completely secure’—if he did not even have physical possession of them?”

The Sunday Times states that David Miranda, cynically referred to as “the boyfriend of the Guardian journalist Glenn Greenwald”, was “seized at Heathrow in 2013 while in possession of 58,000 ‘highly classified’ intelligence documents after visiting Snowden in Moscow.” Greenwald counters that Miranda “had never been to Moscow and had never met Snowden. … The Sunday Times ‘journalists’ printed an outright fabrication in order to support their key point: that Snowden had files with him in Moscow. This is the only ‘fact’ included in their story that suggests Snowden had files with him when he left Hong Kong, and it’s completely, demonstrably false…”

The claim that the Russian and Chinese governments learned the names of covert agents by cracking the Snowden file, “forcing MI6 to pull agents out of live operations in hostile countries,” he adds, “appears quite clearly to be a fabrication by the Sunday Times … [because] not even the anonymous officials claim that Russia and China hacked the entire archive, instead offering only vague assertions that Russian and China ‘have information’.”

Greenwald ends by noting, “The Sunday Times has now quietly deleted one of the central, glaring lies in its story: that David Miranda had just met with Snowden in Moscow when he was detained at Heathrow carrying classified documents.” The claim “remains in the print edition and thus requires a retraction.”

Privacy International, Liberty, MPs Tom Watson and David Davies and many others have pointed to the timing of the Sunday Times smear, suggesting that it is a counter to last Thursday’s publication of the official report on UK surveillance laws by David Anderson QC. They have cited in particular its call for judicial rather than ministerial oversight of surveillance.

This lends unwarranted credibility to a report that in fact justifies existing mass collection of phone and Internet data and the extension of such powers providing only that a “detailed operational case” and a “rigorous assessment” of the intrusiveness, effectiveness, cost and legality of extended snooping powers is made by the security services. This is meaningless, no matter what civil liberties groups might believe or suggest.

Anderson also supports the compulsory retention of “third party data” and urges the government to secure the cooperation of Google, Facebook, etc., to this end. He comes out in support of companies handing over encryption keys.

What is of greater concern for both the government and the Murdoch press is the widespread public opposition to mass surveillance, particularly when the intention is to pass the “snoopers’ charter” into law in the autumn.

The Draft Communications Data Bill creates wide-ranging powers to compel any communications service provider to collect and retain information about any organisation that interacts with users and produces or transmits electronic communications, even if this information is irrelevant to their business needs. This information includes Deep Packet Inspection that bypasses encryption software and matching data from different sources to create a central database of communications, behaviours and patterns of activity.

Last week, the Intelligence and Security Committee confirmed that Government Communications Headquarters (GCHQ) is still collecting “bulk personal datasets” from millions of people’s phone and Internet records. Privacy International has launched a legal claim before the Investigatory Powers Tribunal (IPT) calling for this practice to be ended—citing the passing of the USA Freedom Act ostensibly curtailing the bulk collection of phone record metadata. In the UK, this is still legal under the Data Retention and Investigatory Powers Act (DRIPA) passed in 2014.

In addition, last month GCHQ operatives and the police were made exempt from prosecution for hacking under the Computer Misuse Act (1990). The exemption move was first initiated last June, one week after a case taken out at the Investigatory Powers Tribunal by Privacy International and seven Internet and communications service providers, and was included in the Serious Crime Bill 2015. The IPT case focused on the alleged use of hacking tools to download malicious software allowing users’ cameras and microphones to be remotely hijacked.

The smearing of Snowden, like that of WikiLeaks founder Julian Assange, is a vital element in a general effort to create a climate of fear to justify state surveillance and repression. This has long been conducted in the name of combating Islamic terrorism. Now, in line with the predatory aims of British and US imperialism, the threat is said to come from Russia and China.

In all cases, millions of working people in Britain and internationally are identified as “the enemy within”, whose democratic rights are trampled on by a ruling elite hell bent on destroying jobs, wages and vital social services.