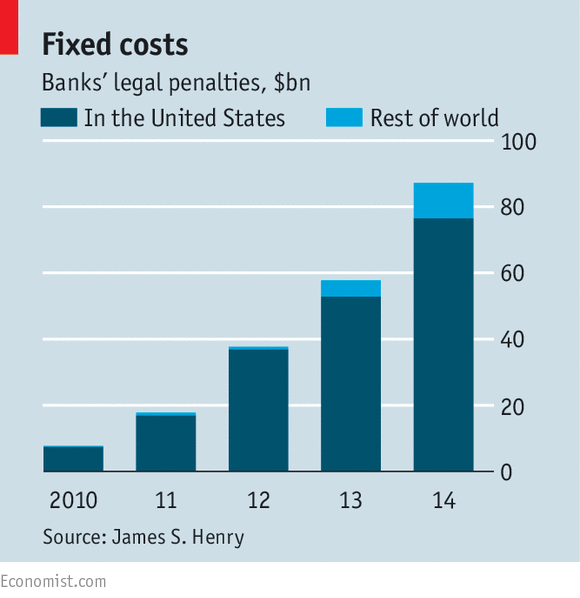 23 May 2015 – The scene was familiar: regulators meting out vast penalties to banks, scathing statements about gross misconduct, yet no individuals charged with any crimes and some confusion as to what exactly the banks were admitting to and what effect that would have. On May 20th a consortium of American and British government agencies announced settlements with six international banks regarding claims that they had manipulated currency markets. The six—Bank of America, Barclays, Citigroup, JPMorgan Chase, Royal Bank of Scotland (RBS) and UBS—agreed to pay $5.6 billion in penalties. All but Bank of America also admitted to crimes, although the significance of that is unclear.

The settlement is the culmination of a long investigation into perhaps 20 employees of the banks, who referred to themselves as the “cartel”. Between 2007 and 2013 they used coded communication in an online chat room to help one another make money, especially by rigging the two daily “fixes” of the exchange rate between the dollar and the euro, violating rules on market manipulation and collusion. As one of them wrote in a chat session, “If you aint [sic] cheating, you aint trying.”

UBS was spared a guilty plea in the currency scandal because it was the first bank to report the suspicious conduct to the authorities. But this is its second “non-prosecution agreement”: three years ago it paid $1.2 billion to American authorities looking into claims that it had manipulated LIBOR, a benchmark interest rate. That deal was dependent on UBS not doing anything else wrong. Its conduct in the currency case has prompted the Department of Justice to tear up the LIBOR deal. The main consequence is yet another fine, of $203m—small beer compared to the $87 billion in similar penalties big banks paid last year (see chart). UBS is also admitting to a crime tied to LIBOR, but that is apparently meaningless: it says the deal “will have no financial impact” on its results.

Admitting to criminal behaviour in America was once a guarantee of bankruptcy. That, at any rate, was the fate of big names such as Drexel Burnham Lambert, an investment bank, and Arthur Andersen, an accountancy firm, which had to shut up shop after losing both operating licences and clients that were restricted from doing business with felons. Yet the Department of Justice and other regulators seem to have magicked this consequence away.

Credit Suisse, another multinational bank, admitted to criminal charges related to its clients’ tax evasion last year, but received waivers from various regulators that allowed it to stay in business. Loretta Lynch, the attorney general, claimed it was up to those regulators to decide whether to do the same this time. “It is thought that the required waivers have been obtained but this is not certain,” wrote Richard Bove of Rafferty Capital Markets, a brokerage, reflecting the confusion.

Private lawsuits will follow. Currency trading is a vast business, with $500 billion exchanged daily in the dollar-euro market. The manipulation may have been transient, but the number of people affected is huge. A group of investors has already struck a $394m deal with Citigroup. There are many more settlements to come.