Although Monsanto was once the exclusive U.S.-based provider of white phosphorous to the U.S. government, Israel Chemicals, Ltd. has started supplying the deadly munition as well. 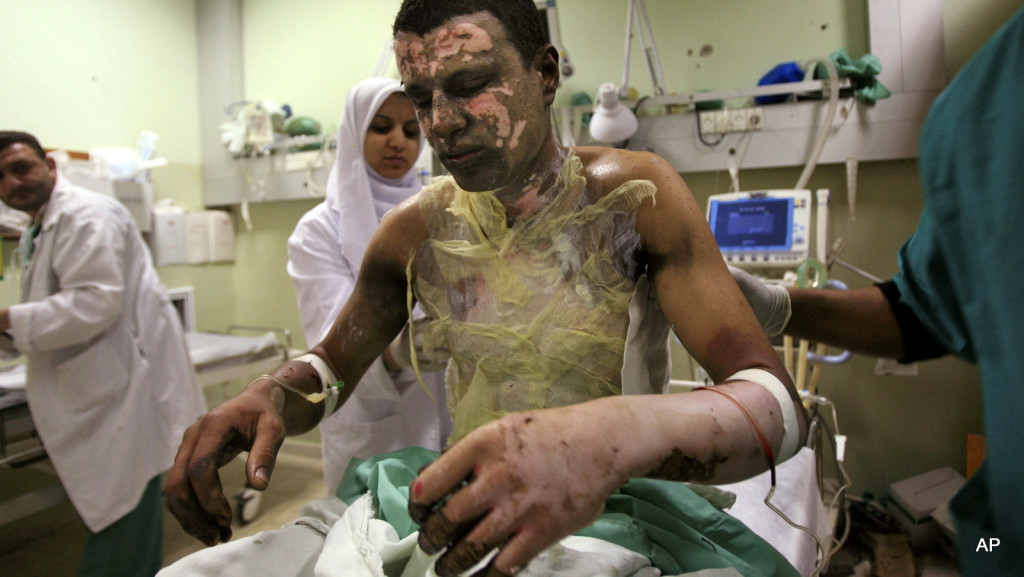 In this Sunday, Jan. 11, 2009, file photo, Palestinian Akram Abu Roka is treated for burns at Nasser Hospital in Khan Younis in the southern Gaza Strip. Human Rights Watch issued a report Wednesday, March 25 2009 that Israel fired white phosphorous shells indiscriminately over densely populated Gaza, and that this is evidence of war crimes.

16 Jun 2015 — Monsanto Corporation, the agribusiness giant best known for its pesticides and genetically-modified crops, also manufactured white phosphorous for the U.S. government over at least the past 20 years. Used in incendiary military weapons, the United States sold white phosphorous-based weapons to Israel, which used those weapons to commit brutal war crimes against Palestinians living in Gaza in 2009.

White phosphorous is created from phosphorous through industrial processes — it is not a naturally occurring substance. Exposure can cause severe and often fatal burns, or other complications such as organ failure, with even survivors suffering from long-term health effects.

In addition to its use in weapons, white phosphorous is also used to create phosphoric acid, a key ingredient in some fertilizers, which likely explains why Monsanto would manufacture the substance.

At one point, Monsanto was the only U.S.-based firm manufacturing the substance. This, of course, caught the military’s attention.

According to heavily redacted government documents revealed by the blog Current Events Inquiry, the U.S. government saw Monsanto as a key supplier, fearing that global politics might interfere with the ability to import the substance from China or India, where most white phosphorous is manufactured due to flimsy environmental protections and oversight. The documents, originally posted on the U.S. Federal Business Opportunities website, state that because of this key role, Monsanto could require special government protections “in the event of a national emergency.”

Further evidence of Monsanto’s role in manufacturing white phosphorous can be found in a U.S. Department of Health and Human Services report from 1997, “Toxicological Profile For White Phosphorous,” which lists Monsanto facilities that store hundreds of thousands of pounds of the toxic chemical. The document also outlines some of the dangerous effects of white phosphorous: in addition to fatal or serious burns, exposure can result in chronic health problems, damage to the immune system, birth defects, and neurological damage.

“The use of white phosphorus is not in and of itself a war crime, and is generally considered acceptable as a means of obscuring troop movements or illuminating areas. Its use in civilian areas however, even if not directed at the civilian population, is banned under the Geneva Convention on Certain Conventional Weapons.” 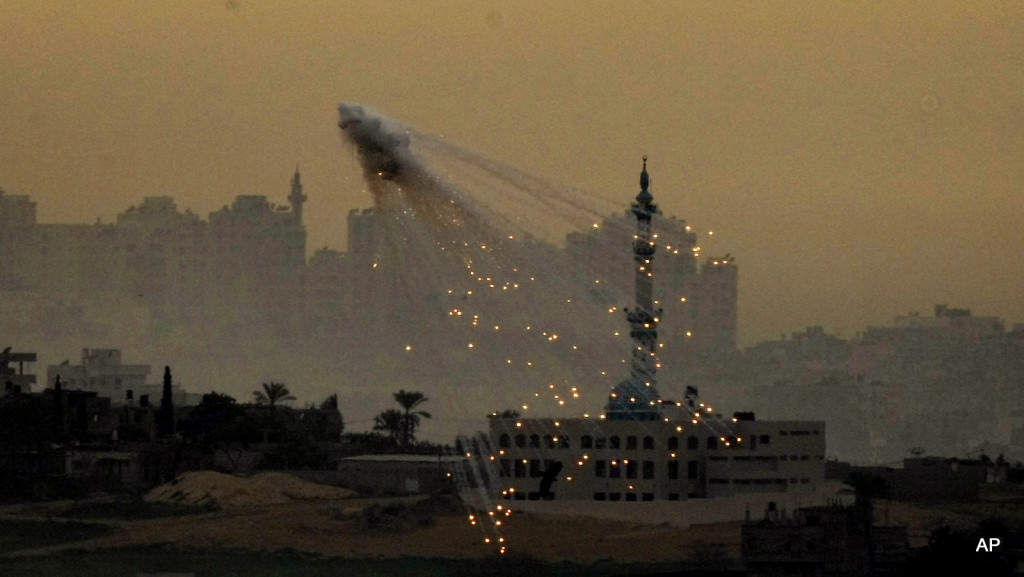 In this Friday Jan. 16, 2009 file photo, an explosion is seen from Israeli artillery during an Israeli military operation in the northern Gaza Strip, as seen from the Israeli side of the border. Israel fired white phosphorous shells indiscriminately over densely populated areas of Gaza in what amounts to a war crime, Human Rights Watch said in a report Wednesday. The Israeli military said Wednesday that the shells were used in line with international law.

Yet Israel had flaunted international law once again, using white phosphorous rounds over some of Gaza’s most “densely populated areas,” according to a March 2009 report from Human Rights Watch, despite acknowledging that white phosphorous can cause horrific burns and fatal health complications:

“A medical report prepared during the recent hostilities by the Israeli ministry of health said that white phosphorus ‘can cause serious injury and death when it comes into contact with the skin, is inhaled or is swallowed.’ Burns on less than 10 percent of the body can be fatal because of damage to the liver, kidneys, and heart, the ministry report says. Infection is common and the body’s absorption of the chemical can cause serious damage to internal organs, as well as death.

If the IDF intended to use white phosphorus as a smokescreen for its forces, it had a readily available non-lethal alternative to white phosphorus – smoke shells produced by an Israeli company, Human Rights Watch concluded.”

The same documents revealed by Current Events Inquiry show that Israel is taking a more direct role in the manufacture of white phosphorous today, now supplying it to the U.S. government via ICL Performance Products, a subsidiary of Israel Chemicals Ltd., which in turn can be traced back to the Ofer brothers, the country’s wealthiest family.

As for Monsanto, this is not the only time the corporation’s products have been linked to war crimes or cancer. The company was recently sued for manufacturing PCBs, a lingering environmental carcinogen, and glyphosate, a key ingredient in Monsanto’s Roundup pesticide, may contribute to cancer. And the U.S. government used 20 million gallons of Monsanto’s “Agent Orange” defoliant during the Vietnam War, the effects of which continue to linger even today.

Kit O’Connell is a gonzo journalist from Austin, Texas. He is an editor and correspondent with MintPress News. Inspired by his experiences in the Occupy movement, Kit’s writing focuses on social justice and popular protest.