June 22, 2015 – The World Bank Group has done little to prevent or dissuade governments from intimidating critics of the projects it funds, or monitor for reprisals, Human Rights Watch said in a report released today. 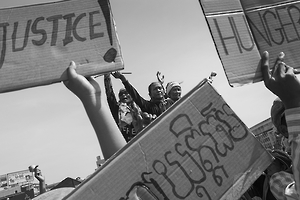 Members of the Boeung Kak Lake community in Cambodia demonstrate at a police blockade in December 2012 on the second day of community activist Yorm Bopha’s trial, on trumped up charges apparently brought for speaking out on forced evictions linked to a World Bank financed project.
© 2012 John Vink/Magnum Photos

The 144-page report, “At Your Own Risk: Reprisals against Critics of World Bank Group Projects,” details how governments and powerful companies have threatened, intimidated, and misused criminal laws against outspoken community members who stand to be displaced or otherwise allegedly harmed by projects financed by the World Bank and its private sector lending arm, the International Finance Corporation (IFC). The World Bank and IFC have failed to take adequate steps to help create a safe environment in which people can express concern or criticism about projects funded by the Bank Group without risk of reprisal, Human Rights Watch found.

“The World Bank has long said that public participation and accountability are key to the success of the development efforts it funds,” said Jessica Evans, senior international financial institutions advocate at Human Rights Watch. “But the World Bank’s repeated failure to confront intimidation or harassment of people who criticize its projects risks making a mockery out of these principles.”

Human Rights Watch found that people who have publicly criticized projects financed by the World Bank and IFC have faced threats, harassment, and trumped-up criminal charges in Cambodia, India, Uganda, Uzbekistan, and elsewhere. When reprisals have occurred the Bank Group has largely left victims to their fate, preferring silence or “quiet diplomacy” over the kind of prompt, public, and vigorous responses that could make a real difference. In spite of what are often grave risks, affected community members in numerous countries have spoken out about the problems that they see with Bank-supported projects.

In northern India, 30-year-old Sita, not her real name, described how employees of the company in charge of constructing a hydropower dam publicly ridiculed community members who were protesting the project as “prostitutes,” viciously insulted them referencing their caste, and warned them of “severe” consequences if they continued their protest.

In Uganda, staff at Uganda Land Alliance and a journalist who worked to document and stop forced evictions linked to an IFC project described threats, including death threats. The government also demanded a public apology to the president and threatened to deregister Uganda Land Alliance unless they withdrew their report documenting the evictions.

In recent years, a growing number of governments have embarked on broad and sometimes brutal campaigns to shut down the space for independent groups. Some governments have responded with ire to criticisms of government-supported development projects, condemning those who speak out as “anti-development” or traitors to the national interests. These abusive measures can obstruct people from participating in decisions about development, from publicly opposing development initiatives that may harm their livelihoods or violate their rights, and from complaining about development initiatives that are ineffective, harmful, or have otherwise gone wrong.

The World Bank Group generally has high-level access to the governments it supports and could exert pressure to push them to tolerate divergent views and accept criticism about development projects as valuable rather than cracking down on dissident voices. But it has repeatedly avoided difficult conversations with partner governments, Human Rights Watch found. The bank has even failed to speak out strongly when affected communities try to make use of its own complaints mechanisms. In one country, the government arrested an interpreter the bank’s internal complaint mechanism had hired to investigate community complaints about a major development project, but the bank did not take a strong stand and the person remains in jail.

The World Bank Group should set clear terms for governments and companies it works with to prohibit abuses against its critics. Human Rights Watch informed the World Bank and IFC of its research and asked how they work to prevent and respond to reprisals. But the Bank Group did not answer the question, instead emphasizing it “is not a human rights tribunal.”

The independent, internal complaint mechanisms for the World Bank – the Inspection Panel – and the IFC – the Compliance Advisor Ombudsman (CAO) – have acknowledged the real risk of retaliation against critics, but neither has established systematic practices to identify risks of reprisals or address them. Since receiving the Human Rights Watch findings, the Inspection Panel has announced it is working on a guidance note on how to respond to reports of reprisals, and the CAO has promised to consider the Human Rights Watch recommendations.

“The Inspection Panel and Compliance Advisor Ombudsman’s eagerness to tackle the risk of reprisals and improve their systems is a great sign,” Evans said. “World Bank management should follow the lead of its complaint mechanisms and take the issue of reprisals seriously.”

In many countries, reprisals occur within a broader government effort to demonize critics as unpatriotic or “anti-development.” The World Bank should routinely counter this discourse by emphasizing to partner governments and companies that criticism of World Bank Group-financed activities is an important part of improving and addressing the impact of development efforts, Human Rights Watch said. The bank should also make it clear to partner governments that it will publicly and vigorously oppose reprisals against critics or people otherwise involved in such activities.

World Bank Group President Jim Yong Kim and the group’s governing board should set the tone for the organization and send a clear message to all staff that they are expected to work diligently to prevent and respond to threats, intimidation, and all other reprisals linked to the group’s activities. The group’s member countries should also ensure that their board members reiterate their human rights commitments and that these commitments guide decisions and communications with the group’s management regarding reprisals.

“The World Bank Group has not developed a consistent practice of identifying and responding to reprisals,” Evans said. “President Kim should take a leadership role in creating an environment in which people can freely share their views, particularly critical ones, regarding the bank’s investments, without fear of reprisals.”

“Don’t be too strong in your advocacy, otherwise you may end up in prison,” an official allegedly told a community member from Khanat Tom village, in Ta Lao commune, Cambodia, who had filed a complaint before the CAO. “I was afraid, but felt I had to continue, because I was doing the right thing.”
– Community member, Cambodia

“The World Bank should at least have someone come and visit me to show their support. It should do what it can to pressure the Cambodian government to release me, as it is because of the World Bank project I ended up in jail.”
– Yorm Bopha, a Boeung Kak lake community activist who was convicted on trumped up charges after protesting the detention of 15 of her fellow community members, speaking from jail. Bopha served more than a year behind bars.

“I feel like [I am] living in a fire. I am being burned alive. But what can I do? I do not fear. I will do what I [am] supposed to do.”
– An Inspection Panel interpreter days before he was arrested, just two weeks after the Panel concluded its process. The interpreter remains behind bars without charge.

“That night when my son resisted, [the contractor] held my son by his neck and threatened that, ‘If you speak too much, I will beat you up….’ Every day [company representatives] threaten us that we should leave otherwise they will beat us up.… I am scared. I live alone.… I worry about my safety.”
– Radha, a community member who stands to be displaced to make way for a hydropower project financed by the World Bank in northern India.

“[Company] officials have threatened to kill us. We are suffering a life of horror.… We request you to immediately suspend funding of the project and save our lives.”
– Letter from local community members affected by a World Bank-financed project in northern India to the World Bank country director, January 7, 2015.

“There is still the stigma. We don’t go out as strong any more. We are very cautious about what we say. We don’t say anything controversial in a meeting any more. It affects how we do our things.”
– A staff member of the Uganda Land Alliance, an independent group whose employees faced threats and harassment and that faced de-registration following its research and outspoken criticism of an IFC-financed project.

“Those who delay industrial projects are enemies and I don’t want them. I am going to open war on them.”
– Yoweri Museveni, President of Uganda, two days after breaking ground on the World Bank-financed Bujagali dam project. Human Rights Watch found that reprisals take place in a broader climate that demonizes critics as “anti-development.”

“I’ve not known the World Bank to do anything to make us safe.”
– Ngat Sophat, a Boeung Kak Lake community member, Cambodia.

“Free speech is the cornerstone of transparency and accountability. Where World Bank projects are being implemented, citizens must have a voice.… The World Bank should have done more to protect the security of people speaking out against this project. It’s us who facilitate the voice of the people. I’m not aware of them [the World Bank] doing anything [about the reprisals against critics of this project].… This makes me believe they think free speech is not an issue for them.”
– Geoffrey Wokulira Ssebaggala, a human rights defender and journalist who covered forced evictions in Uganda linked to an IFC-financed project.