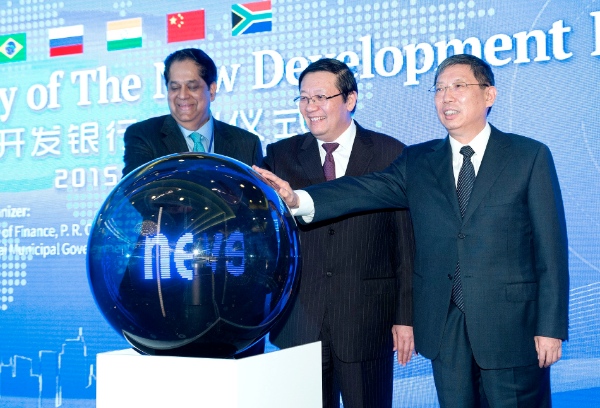 July 24, 2015 – The BRICS New Development Bank will name its first investment in April next year and the first loan will be issued in yuan not dollar, top officials confirmed.

The first president of the Bank, Kundapur Vaman Kamath said in Shanghai that the new lender will work closely with the China-led Asian Infrastructure Investment Bank.

“We have partnerships that we will forge with the AIIB, the national loan banks and indeed, the exiting market loan banks,” he said.

The NDB with about $50 billion in capital to invest in public infrastructure will compete with institutions where the US has considerably more influence—organizations such as the World Bank and the International Monetary Fund.

Kamath, who has been nominated by India to head the bank, also said the first investment will be made in the Chinese currency. This would aid China’s attempts to diminish the dollar’s dominance in global trade and finance. China is also pushing for the International Monetary Fund to endorse the Chinese yuan as a global reserve currency alongside the dollar and euro.

The bank has an initial authorized capital of $100 billion.

Its initial subscribed capital of $50 billion will be equally shared among the founding members.

The paid-in reserves are planned to be denominated in each country’s currency. The Chinese renmimbi is also expected to replace the dollar at the BRICS Bank, especially for projects in Asia.

An African regional center of the bank will be based in Johannesburg, South Africa.

The BRICS central bank governors in Ufa also signed an operating agreement on the $100 billion BRICS monetary fund that will come into force on 30 July.