On his Rebel Content Tour, Young’s invited Native activists to speak out against a mining industry land grab. 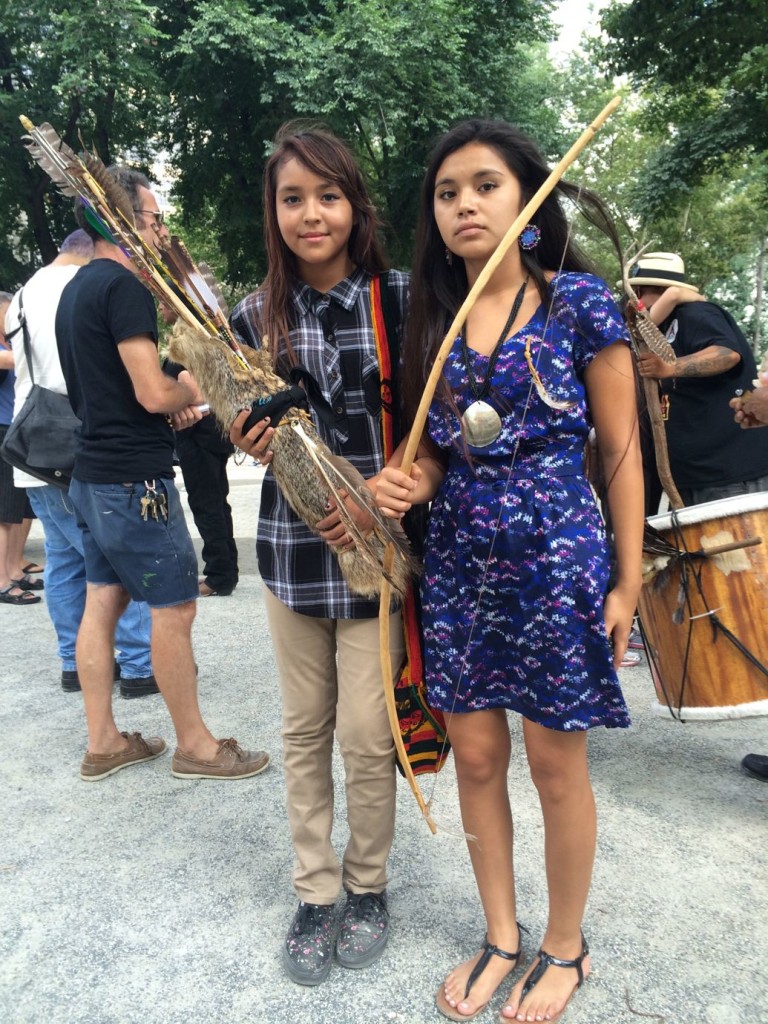 Activists with the Apache Stronghold caravan, which are fighting to preserve a section of Native land called Oak Flat. Joseph Huff-Hannon

July 21, 2015 – Nizhoni Pike and her friends had the best seats in the house for the Neil Young concert in Jersey last week – better than front row.

In fact, they’ve had an incredible vantage point at several of the shows on Young’s Rebel Content Tour this summer.

“It’s been pretty awesome to be up on stage and look out and see so many people supporting us, yelling for us,” Pike tells Rolling Stone. “And we know some of his songs. We’ve been singing along!”

Pike is part of a cross-country caravan called the Apache Stronghold, made up of dozens of activists and supporters of the Arizona San Carlos Apache tribe who are calling out a mining industry land grab rammed through Congress last December – and who have made an unconventional opener for Young.

Starting at Red Rocks earlier this month, and in venues across the country since, the Apache have been linking up with Young on the road, sharing their stories and singing prayer songs to thousands of audience members.

The activists are trying to preserve a stretch of canyon land in Tonto National Forest called Oak Flat, an hour east of Phoenix, where young Apache women like Pike have celebrated coming-of-age ceremonies for generations. “I became a woman at Oak Flat, I had my sunrise dance there, so it’s like my heart is there,” she says.

Business interests see treasure in those hills, too; a company called Resolution Copper, a subsidiary of the Australian-British mining giant Rio Tinto, has long wanted to get at the massive copper deposits buried under Oak Flat. Last December the company got a step closer to its goal, when the two senators from Arizona, John McCain and Jeff Flake, slipped a last-minute rider into the National Defense Authorization Act authorizing a land swap long favored by the company. A recent New York Times op-ed described how, “by doing this, Congress has handed over a sacred Native American site to a foreign-owned company for what may be the first time in our nation’s history.” 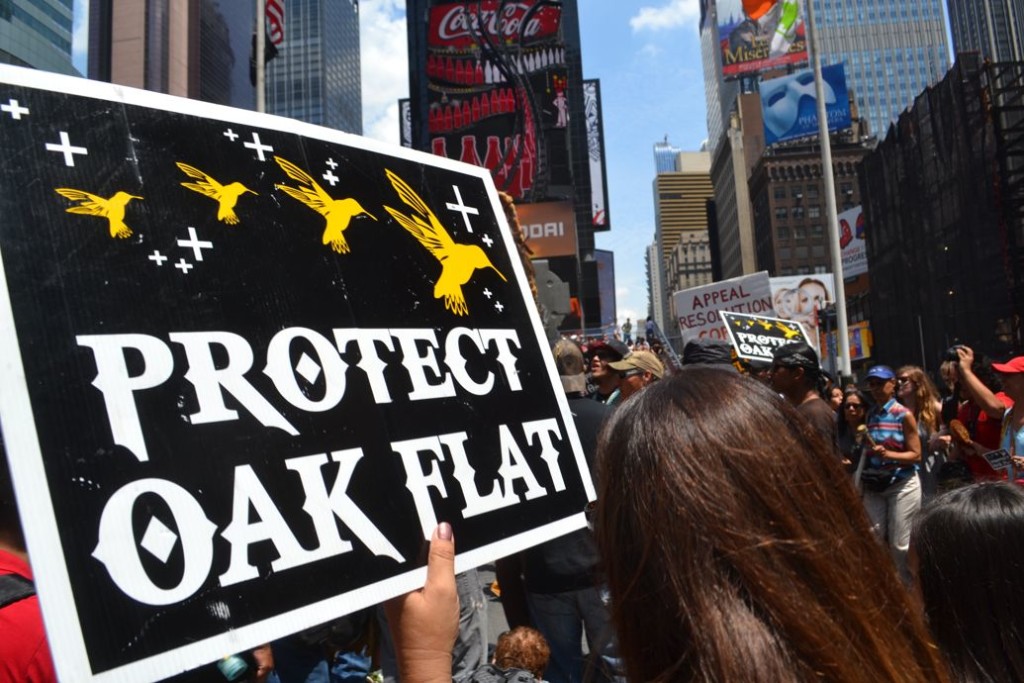 What would induce Congress to do such a thing? The mining industry says thousands of jobs will be created by digging up Oak Flat, and Sen. McCain touted the deal’s value to national security, saying in a statement, “To maintain the strength of the most technologically-advanced military in the world, America’s armed forces need stable supplies of copper for their equipment, ammunition, and electronics.”

And then, of course, there’s the money. Sen. Flake is a former lobbyist for the mining industry, who’s received almost $200,000 from mining interests, including Rio Tinto, since his election, and Sen. McCain is one of the top Congressional recipients of campaign contributions from Rio Tinto, according to OpenSecrets.org.

But the senators and their friends in the mining industry may have underestimated their opposition, which is low on funds but high on morale and tenacity. For months now, Apache activists have been occupying Oak Flat campground, and more and more people across the country and the world have gotten behind their cause. As of this writing, more than 600,000 people have signed a petition at Avaaz calling on Congress to repeal the rider, and to apologize to the Apache for putting their cultural heritage up for sale. Rock climbers and outdoor enthusiasts who don’t want to see this corner of the West turned into a moonscape have been raising a ruckus as well.

And then there’s the very musical ruckus being raised by the Apache Stronghold caravan, of course. Rolling Stone caught up with Pike and about two dozen other members of the caravan last week at a drum circle in New York’s Columbus Circle, the day after they opened for Young in nearby Camden, New Jersey. For many in the caravan, this marks their first visit to New York City. (“Not even a single statue to honor the Native people who used to live here, but a big old statue of Columbus,” drummer and caravan member Rudy Red Dog says. “Go figure.”)

They walk down Broadway toward the theater district and Times Square for a noon flash mob to raise awareness for their campaign. There, in the middle of a scrum of curious tourists, flanked by billboards for Coca-Cola and Broadway shows, teenage caravan member Naelyn Pike dances around a circle of drummers, her fist full of arrows. “If the government can do this to us, they can do it to everybody else,” she says. “This isn’t just an Apache fight, or a Native American fight, it’s an American fight. This affects all of us.”

The girl’s grandfather, Wendsler Nosie Sr., a former tribal chairman and one of the chief organizers of the caravan, explains how the canyons of Oak Flat fit into the historical and spiritual life of the Apache. “For the Apache, it’s a sacred site, a holy site, the identity of our people,” he says. “What would Congress say if they wanted to mine on Mount Sinai? For us it’s the same.” 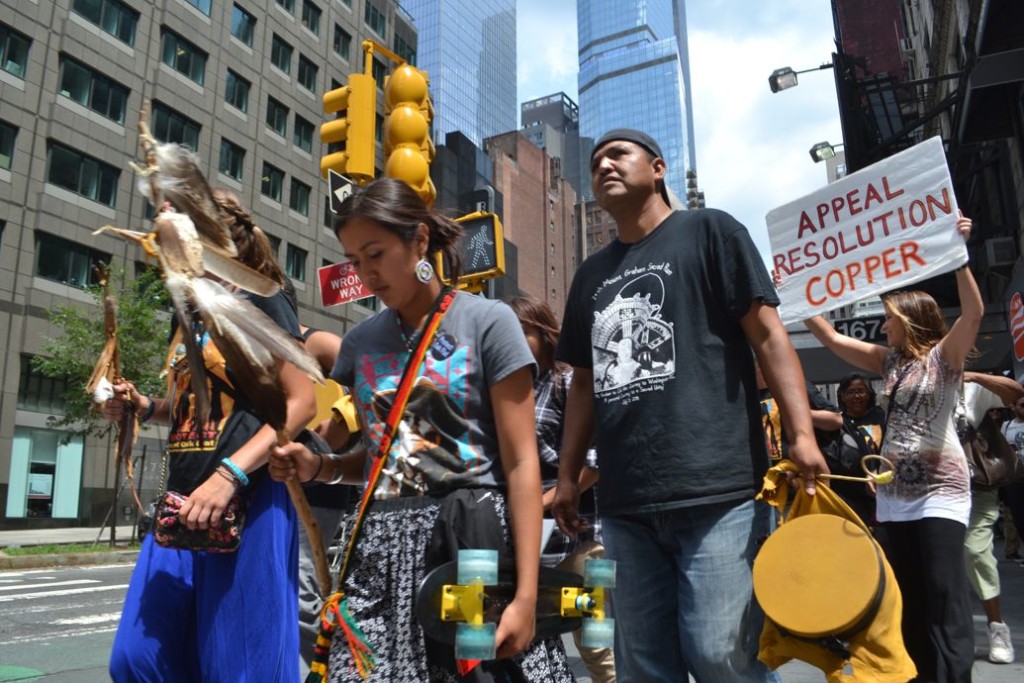 This week the Apache Stronghold caravan makes its last stop, in Washington, D.C. They’re planning a midday rally outside the Capitol on July 22, and are meeting with members of the House and the Senate, looking to recruit more Congressional allies to overturn the rider that gave away their land. A drum circle outside Sen. McCain’s office isn’t out of the question. They’ve also found an ally in Rep. Raúl Grijalva of Arizona, a progressive champion in the House who’s introduced the Save Oak Flat Act, for which he is rustling up co-sponsors.

“We’ve broken faith with Native American communities time and time again. Giving away a sacred site of the First Americans to a foreign-owned corporation strikes me as especially cruel,” Rep. Grijalva says in an email. “Oak Flat should be preserved on its own merits – President Eisenhower was right to prohibit mining on these lands – and also to show the respect we have always owed Indian Country and too often failed to demonstrate.”

It’s a David and Goliath fight, but after weeks on the road, meeting with other tribes, talking at churches and community centers, and sharing the stage with one of the world’s most iconic rebel rockers, Wendsler Nosie Sr. is optimistic. “People are finally waking up to this dirty deal,” he says. “We believe there’s conscience in America, and we decided to take our fight on the road to reach out to the power of this country. And the power’s not Congress. It’s the people.”

As for Neil Young, he tells Rolling Stone in an email that he was motivated to get involved in the Apache fight because he hopes that “by watching our Native American brothers and sisters” – who have taken care of their own land “since time immemorial” – “we can learn how to take better care of our precious gift.”

Note: The author of this piece is employed by Avaaz.