Putin and Xi Plot the Future of Eurasia

Strengthening ties between Moscow and Beijing are tipping the world’s balance of power eastward. 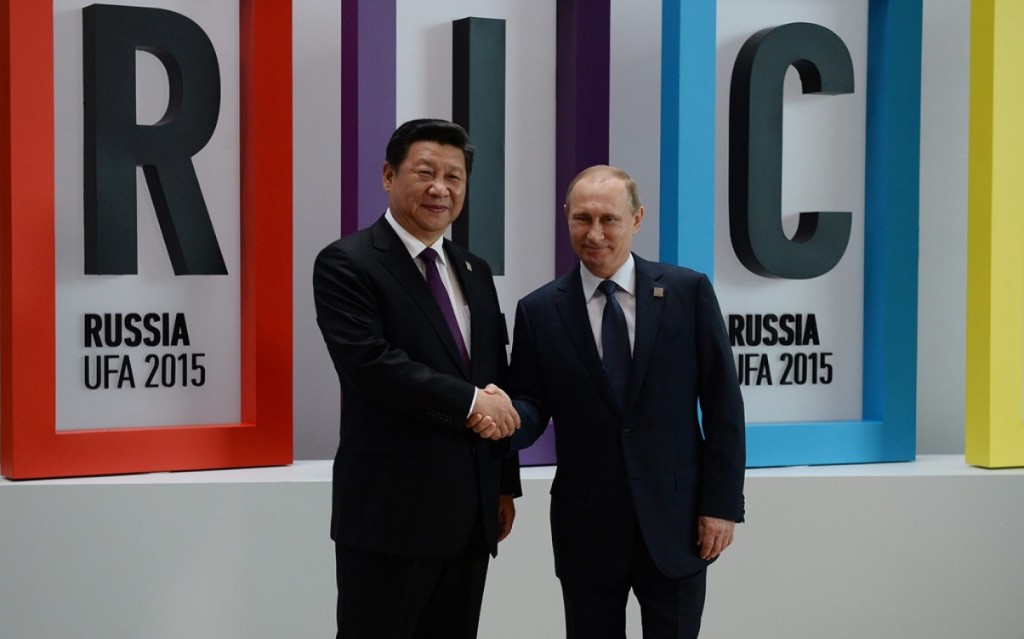 July 26, 2015 – One of the most significant visionary gatherings of the young 21st century took place in early July in the balmy city of Ufa, capital of the richly diverse Republic of Bashkortostan in Southern Russia.

Putin and China President Xi Jinping dominated the announcements of plans for what looks to be a comprehensive blending of interests and resources of all the states for the balance of the century.

In a video released to the media, Putin and Xi sat directly across from each other in a vivid demonstration of plain-spoken, all-business authority, as Putin welcomed Xi to “one of the most beautiful parts of our country,” and Xi called Putin “my old friend.”

The result was a demonstration of the potential for British geographer Halfor Mackinder’s century-old theory that Europe and Asia form a supercontinent, with Russia as the central nation, the “Heartland,” of Eurasia. To translate this to present geopolitical terms, Russia and China look to be constructing a grand alliance of Eurasian powers that could counterbalance the U.S. and its Western allies.

The Ufa confabs were starkly absent of any representatives from the West. And rather than Russia being isolated by the U.S.-directed sanctions because of the Ukraine crisis, it was the US and its NATO allies who were notably absent from the discussions.

The five-year old BRICS association, with 40 percent of humanity and 20 percent of world GDP, made several announcements looking to bolster membership, enhance growth and most importantly to create an alliance that is independent from American-influenced institutions

The New Development Bank, signed into life last year in Brazil, will consider new infrastructure projects by year’s end with what is promised to be “simple, clear and transparent” procedures.

Also announced was a $100 billion currency pool to provide security from currency shocks. This pool is understood to supplement, if not compete, with the International Monetary Fund established at the end of World War II.

The BRICS association soon aims to make it possible for mutual settlements between members to be in local currencies, not depending on the U.S. dollar.

These steps by Beijing and Moscow seek to construct a basis for financial independence from the West by 2030. Russia and China have spoken in the past of a world currency other than the US dollar. Now the old friends want to go much further.

In a surprise Russian television broadcast on Friday, July 3, a week before the Ufa meetings, the expanded Russian national security council appeared alongside Putin in order to lay out a vision for the decades ahead. Because of Western sanctions combined with the sharply reduced price of oil, Russia is suffering a severe recession right now that will deepen later this year. However, the television presentation was about the Kremlin’s ambition to be financially and economically independent of America and even Europe by 2030.

The second day of the Ufa meetings was for the 15-year-old Shanghai Cooperation Organization (SCO) and its big dreams for Eurasia.

The combination would fall under the umbrella of the extant SCO. The advantage to Russia would be access to capital now unavailable because of Western sanctions. The advantage to China would be that it only has to cross “one unified tariff zone” to reach the rich West.

Also, the SCO announced that observer states India and Pakistan will soon join as full members. Other Asian states are also lining up to join the SCO. Iran, Mongolia, and Afghanistan  have observer status. Russia said it will invite Iran to join SCO fully as soon as possible, pending the success of the proliferation talks. Also, Putin said that “Azerbaijan, Armenia, Cambodia and Nepal are joining the SCO as dialogue partners.”

The SCO also said it was working to establish a Development Bank and Development Fund. Russia has already joined with dozens of other nation in the “Beijing-led Asian Infrastructure Investment Bank.”

Chinese dreams for Eurasia are breathtaking in scale, reminiscent of a Jules Verne adventure. There is a proposal to construct an 8,000-mile underground railroad from China through Siberia and across the Bering Sea to Alaska and Canada. There is another proposal to tunnel under Mt. Everest.

Of note, the SCO showed solidarity with Moscow on the Ukraine crisis. It issued a closing document that called for a peace following the Minsk 2 accords of last February.

Also of note, Russia expressed solidarity with China in its present dispute with Japan and its neighbors in the South China Sea. Putin accepted Xi’s invitation to attend the September celebration of what is billed as China’s victory over Japan but what is understood by Japan to be a Chinese chauvinist provocation in the region. The Chinese Communist Party had nothing to do with the defeat of Imperial Japan in 1945 by Chiang Kai-Shek’s National government.  Nonetheless, Russia and China are now presenting a united front not only to American and Europe but also to America’s allies in Asia.

Putin did not restrict himself to diplomatic pleasantries. He emphasized his concern for the deteriorating security in Afghanistan, where drug traffickers and the the Islamic State’s infiltration threaten the whole region, including SOC members Tajikistan, Uzbekistan and China. Putin explicitly mocked the U.S. for its 14-year-long war in Afghanistan that “did not substantially improve the situation there.”

Chinese President Xi added his voice to worries about Afghanistan’s fate, saying that China has “to play a bigger role” in reconciliation and restoration.

While the Ufa meetings were primarily about economic development, there is inherently the means to construct a security treaty organization that would rival NATO in Europe and the U.S. and its allies in Asia.

For example, Japan is cognizant of the potential of Russia and China leading a military alliance in Asia, and there are reports that Japan is seeking closer diplomatic links to Russia, following joint military exercises on Sakhalin Island in July. In addition, Japan has shed its pacifism since 1945 and granted its military authority to participate in foreign conflicts.

Ufa may be a relaunch of global competition from the unipolar world following the end of the Cold War into a new multipolar world. This multipolarity will require fresh dialogues between the adversaries, similar to the mechanisms once put into place among Washington, Moscow and Beijing that led to détente and arms controls of the 1970s. Today’s limits on U.S. power are evident. There is nothing to be gained by Washington pretending it can continue to project military and economic power into an ambitious Eurasia.

John Batchelor is a novelist and host of a national radio news show based in New York City.