How I Learned to Hate Animals

12 Aug 2015 – How are we socialized into accepting systematic violence against animals? Like anything else, I think we learn the rationales for non-human exploitation in drips and drops. This education — or more accurately, miseducation — probably takes place throughout our lifespan, with different answers formulated to meet our ideological needs at different times and places. There’s nothing particularly nefarious in the process. Speciesist messages are passed on by well-meaning people. Human violence against animals is just the way it’s always been. Plus, it generates a great deal of money for certain people at the top of the economic hierarchy, and one might argue even those humans on the bottom benefit.

Above others, a particular instance in my socialization stands out. In 1999, I was 12. My father had just accepted the headmaster position at a boarding school which, as a result, I would attend free of charge. The institution boasted a farm and in the fall students participated in what was euphemistically referred to as “chicken harvest,” as if killing sentient individuals was no different than the harvesting of potatoes, which took place around the same time. Leading up to the event, the school held an assembly at which the barn manager, a stout Irish immigrant, explained how animals were treated on factory farms and how it was different from that of those in his care.

The implication seemed to be that in raising and killing birds the way the school did, we did them a favor. The unstated assumption, of course, being that animal agriculture was inevitable. I learned there was a certain nobility in participating in violence against animals. Doing so represented a mature embrace of the world’s complexities, in contrast to those who bought the cellophane-wrapped results in the supermarket. Of course, acknowledging a contradiction doesn’t make furthering it less hypocritical. And one’s direct rather than passive participation doesn’t matter to the animals being killed. But it seemed like the reasonable, adult position at the time.

Attending chicken harvest wasn’t mandatory, but there was a strong pressure to do so. Those who didn’t participate were forced to spend the day in the library, writing a report on animal treatment in factory farms. Only a handful of vegetarian students did this, one of whom I had a crush on. And in retrospect, I’m amazed by their ability to resist pressure from friends and teachers. 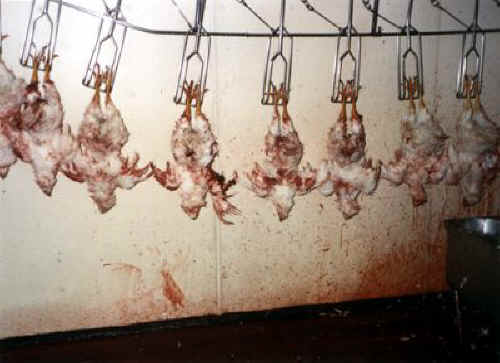 Chicken harvest was videotaped that year. In the recording, you can see me in my denim work jacket, gripping my neck in vicarious horror. There was a performative aspect to my reaction. But despite this, the slaughter was the first real instance of violence I had ever seen, so far as I can remember. And it was horrifying. Undoubtedly I had witnessed schoolyard scuffles, but nothing like this. Nothing that resulted in a bucketful of the lopped-off heads of living individuals, blinking in their apparent last moments of consciousness.

When it was over, I remember laying in the grass with my friends, publicly vowing to become vegetarian. This oath, of course, lasted a few days tops. Later, some boys broke into the car of my English teacher, an outspoken vegetarian who didn’t attend chicken harvest or barn chores, and draped the interior with animal flesh. I remember acting, like my peers, as if it was quite funny. I think we believed she got what she deserved, for not recognizing the way things were and doing so while a woman.

Two years after, in my final year at the school, I was a full participant in the year’s slaughter. Together with a girl I briefly dated, I wrestled a turkey into a large bucket with a small slit, just big enough for its neck to stick out from. I pinned the animals’ writhing body to the ground after its head was cut off with an axe, until the poor creature bled out. From there, we brought the carcass through the methodical process of boiling, plucking, gutting and cleaning. Somewhere, there’s a photo of me smiling, holding the corpse upside down, waving to the camera with a glove-covered hand smeared with blood. It wouldn’t be until I was preparing to go to college, reading Peter Singer’s Animal Liberation, that I began to question the assumptions behind that smile.

Jon Hochschartner is a freelance writer from New York.