Religious Eugenics: How Saudi Arabia Is Sponsoring a Frightening New Movement in the ME

22 Aug 2015 – Blanketed by its wealth and protected by political alliances, Saudi Arabia has covertly run and promoted a new movement in the Middle East: religious eugenics, under the false pretense of opposing the rise of Iran. From Syria to Bahrain and Yemen, the evidence is overwhelming. 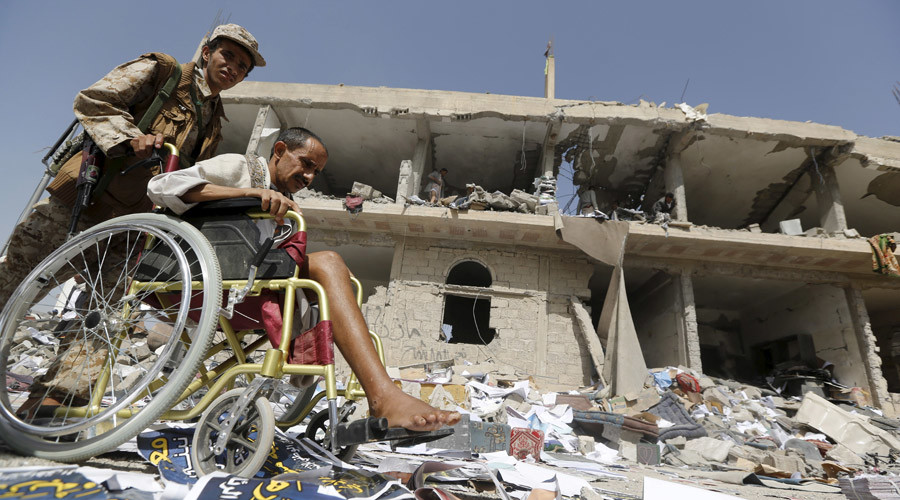 Earlier this August, the Red Cross added its voice to those of other humanitarian and rights groups in its condemnation of Saudi Arabia’s war in Yemen, lifting the lid on Riyadh’s little house of horrors in southern Arabia.

In no uncertain terms Peter Maurer, the head of the international Red Cross told reporters he had seldom witnessed such degree of devastation. He said: “Yemen after five months looks like Syria after five years … The images I have from Sanaa and Aden remind of what I have seen in Syria.”

He stressed “the firepower with which this war is fought on the ground and in the air is causing more suffering than in other societies, which are stronger and where infrastructures are better off and people are wealthier and have reserves and can escape.”

A country in ruins, Yemen is also a nation in permanent mourning, as every day its people are relentlessly slain – casualties of a violent and murderous colonial war – the latest victims of Riyadh’s expansionist military campaign in the Middle East.

While such figures are horrifying, they fall short of the truth. Agencies on the ground have already said that well over 500 children have been killed in Saudi-led air raids, most specifically in northern Yemen, where the war has been most devastating and aggressive. On average, children account for a quarter of all deaths and casualties.

For those who have managed to find shelter, living conditions are catastrophic. With no water, no electricity, little food and no access to health facilities ten million children are at risk of disease and starvation – again, North Yemen has suffered the brunt of this crisis.

Never in its history has Yemen experienced such a degree of pain and utter despair. But while wars are generally ugly affairs since they require their fill of blood before the canons finally fall silent, Saudi Arabia’s campaign in Yemen is far from ordinary.

But not only that, Saudi Arabia’s foreign policy in the Middle East is betraying a disturbing and rather ominous covert agenda, one which resonates with ethnic engineering and religious eugenics.

And if so far few have connected the dots, their hands tied by Riyadh’s overbearing and overarching control on media outlets and the grand political narrative, it is high time we learn to recognize Al Saud’s campaign for what it really is: a concerted effort to cleanse the region of all religious minorities, beginning with Shia Islam, its self-appointed nemesis.

To put it in simple terms – under Saudi Arabia’ suffocating grip, religious minorities are dying a slow and painful death.

From Syria to Bahrain, the kingdom’s eugenics campaign threatens the region’s religious and ethnic patrimonies, in a fashion reminiscent of Nazi Germany, when Jews and Gypsies were labeled undesirables.

Saudi Arabia is now building 600 mile wall to keep dangerous people out. What a concept! #tcot#pjnet#FoxNewspic.twitter.com/u056SB7HxW

In an interview this April, the Saudi ambassador to the United States, Adel Al-Jubeir lifted the veil on Riyadh’s determination to carry through its agenda, no matter the price, no matter the impact. He asserted: “This campaign is having a huge impact in Yemen and it is not over yet. For us failure is not an option. We will destroy the Houthis if they do not come to reason.”

If subtitles were running they would read – the Houthis will be destroyed because they represent a religious challenge to Wahhabism’s hegemony in the region. The Houthis, and the majority of all northerners in Yemen are Zaidis, a branch of Shia Islam.

Is it then a surprise that while South Yemen has benefited from humanitarian aid, North Yemen has witnessed a spike in violence, its seaports targeted to prevent food and medicine to be ferried in? Riyadh is quite simply profiling aid to carry out its religious cleansing, punishing millions for their rejection of Riyadh’s religion.

Saudi Arabia is an absolute theocracy, and as such its very raison d’ être is rooted within its violent and reactionary interpretation of Islam: Wahhabism, the ideology which inspired the likes of Al Qaeda and Islamic State. One of the main tenets of Wahhabism actually calls for the destruction of all religious sects, Islamic or otherwise. For Wahhabis there can be no greater glory than to massacre “apostates.”

And while Riyadh’s neo-eugenics movement has taken on different forms, operating under various denominations depending on the countries it has targeted, the underlying current has been the destruction of religious pluralism.

Let me ask you this: Is there a real difference between Manama’s campaign to strip Shia Bahrainis from their nationality because the House of Al Khalifa seeks to eliminate all political and religious competition, and Islamic State’s murderous rampage against religious minorities in Iraq and Syria? And though Bahrain’s campaign might appear more “elegant” in that it is more covert and pernicious, the intent remains the same.

From the language used to the policies it has carried out in the Middle East, Riyadh has pushed the sectarian card, christening the resistance movement against its eugenics movement, the so-called Shia crescent threat.

Catherine Shakdam is a political analyst, writer and commentator for the Middle East with a special focus on radical movements and Yemen. Her writings have been published in world-renowned publications such as Foreign Policy Journal, Mintpress News, The Guardian, Your Middle East, Middle East Monitor, Middle East Eye, Open Democracy, Eurasia Review and many more. A regular pundit on RT, she has also contributed her analyses to Etejah TV, IRIB radio, Press TV and NewsMax TV. Director of Programs at the Shafaqna Institute for Middle Eastern Studies and consultant for Anderson Consulting, her research and work on Yemen were used by the UN Security Council in relation to Yemen looted funds in 2015.