The volunteers were facing charges relating to the “crime” of interfering in the slaughter of over 250 pilot whales on the killing beaches of Bøur and Tórshavn in the Faroe Islands on July 23. During the trial, which took place earlier this week, the prosecution also implicated Sea Shepherd Global in the “offense.”

Xavier Figarella of Corsica (France) and Marianna Baldo of Italy were arrested as they attempted to document the Bøur slaughter from their tender. Both have been ordered to pay a fine of 30,000 kroner (approximately 4,400 USD or 4,020 euros) or spend 14 days in jail.

Kevin Schiltz of Luxembourg was arrested later that day at the second slaughter in Tórshavn, where 142 pilot whales were slaughtered. Schlitz has been ordered to pay a fine of 5,000 kroner (approximately 740 USD or 670 euros) or spend eight days in jail.

Sea Shepherd Global has also been fined 75,000 kroner (approximately 11,000 USD 10,050 euros) for allegedly orchestrating the incidents that led to the crewmember’s arrests, although the organization steadfastly denies any wrongdoing. Authorities in the Faroe Islands will also keep possession of the tender, used by Figarella and Baldo on July 23. 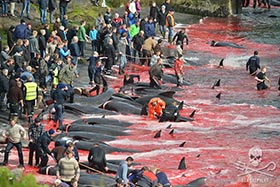 At the trial, Kunneke refused to enter a plea and has since stated, “I did not enter a plea because I do not recognize the Faroese Pilot Whaling Act as a legitimate law. Denmark is a signatory state of the Bern Convention. Denmark’s support of the grindadráp runs against the sentiments of its obligations under this convention, as do our arrests – which were undertaken by police officers who are officially a part of Denmark’s National Police Force, and our trial in this court – which is officially a part of the Danish legal system.”

The slaughter of cetaceans is outlawed throughout the European Union, including Denmark, in accordance with Appendix II of the Convention on the Conservation of European Wildlife and Natural Habitats (Bern Convention).

However, in the Faroe Islands, the slaughter of pilot whales and other small cetaceans continues with the assistance of the Danish Police Force and Navy, and with the blessing of the Danish government.

The Deputy Chief Prosecutor is now attempting to deport the five volunteers from the Faroe Islands. Appeals are currently being lodged in relation to all charges.

A total of seven Sea Shepherd crewmembers from seven different countries have been arrested in the Faroe Islands since July 20. All are facing charges relating to breaches of the Pilot Whaling Act.

Susan Larsen of the United States and Tom Strerath of Germany were arrested on July 20 following an attempted grindadráp near Klaksvík in the northeast of the archipelago. Larsen has been allowed to return to the United States following a preliminary hearing. Strerath remains in the Faroe Islands, his passport confiscated by local authorities. A follow-up court date for the pair is yet to be scheduled.

Sea Shepherd has been leading opposition to the grindadráp since the early 1980s, and is currently in the Faroe Islands for the organization’s sixth Pilot Whale Defense Campaign, Operation Sleppid Grindini.