As way to highlight some of the Occupy movement’s successes, Formal Consensus isn’t ideal for every situation or issue. So where do we go from here to develop a better system? 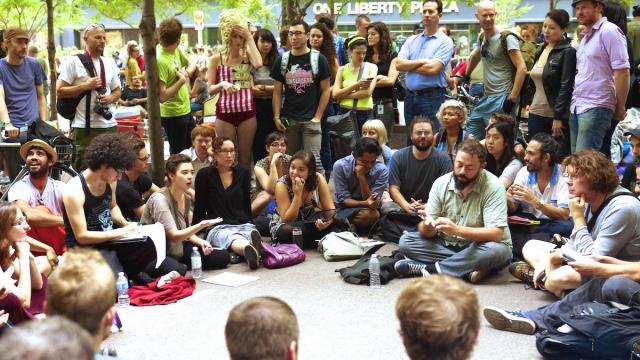 “Collective Thinking is born when we understand that all opinions, be these opinions our own or others’, need to be considered when generating consensus and that an idea, once it has been constructed indirectly, can transform us.”
– From “On Conflict and Consensus” by C.T. Lawrence Butler

10 Aug 2015 – One of the main criticisms made by mainstream commentators about Occupy Wall Street was that it didn’t articulate a set list of demands. Lacking the vision to see that the occupiers were not interested in working within the current system, they concentrated their ridicule on the “human mic” and the hand signals that gave voice to everyone in the crowd, whether in New York, London or other cities as Occupy spread through North America and Europe.That most of these commentators didn’t participate in or more than casually observe the General Assemblies that were the fullest expression of the movement, is an often neglected part of the story.

It should also be remembered that through these General Assemblies, functioning mini-societies were quickly created at most of the encampments with libraries, people’s kitchens and health-care provided to participants and bystanders alike. Hardly signs of a failure of the political model on which they were based.

For many occupiers, it was their first experience of direct democracy based on the Formal Consensus model which finds its fullest expression in “On Conflict and Consensus” by C.T. Butler and Amy Rothstein, a guidebook presenting it as an alternative to conventional protocols like Roberts Rules of Order. Although the model was new to many people, it is actually much easier to teach quickly than the formalities associated with Roberts Rules.

One of the main attributes of Formal Consensus is its intention to be non-adversarial, to ignore the traditional “us vs. them” paradigm that has increasingly paralyzed politics, especially in the US. Rather than being unique to Occupy, consensus building as a political process has a long history and movements in Spain, Greece and Chile earlier in 2011 had once again shown activists how it could function on a larger scale. 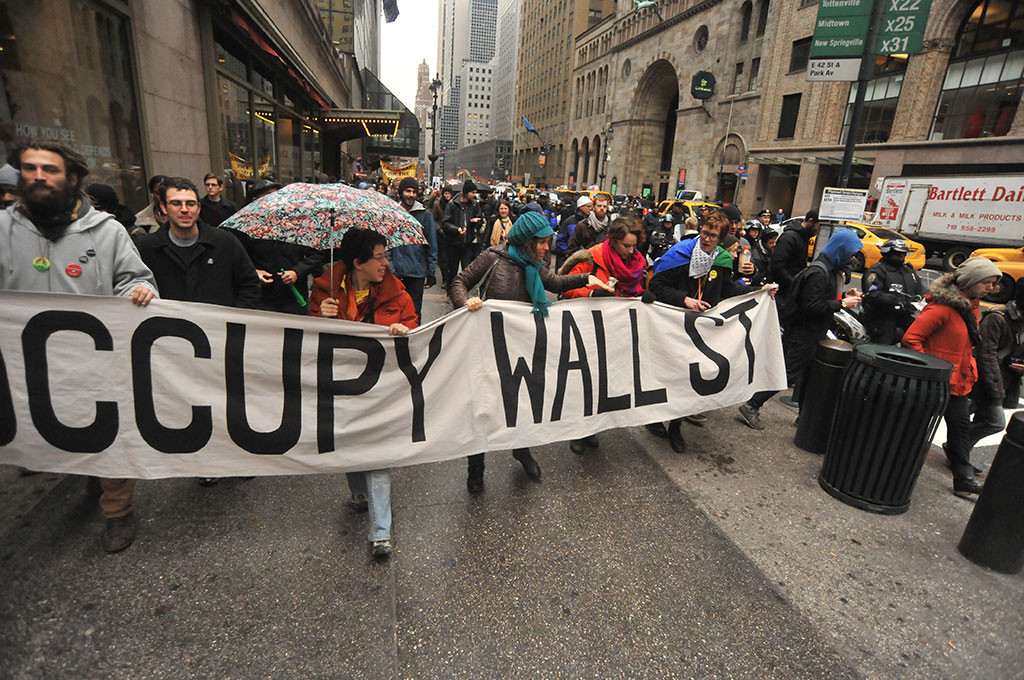 The Problems of (Formal) Consensus

There was a lot criticism of the “progressive stack”, a technique adopted at Zucotti Park and elsewhere.as the occupations progressed.The idea was to deal with one of the main problems created by Formal Consensus, the fact that it can marginalize minority voices. The progressive stack prioritized these voices by moving them to the front of the line in working groups and to address the General Assemblies. Those prioritized in this way included not only traditionally marginalized groups like African Americans and members of the LGBTQ community, but also people under the age of 18 and older than 35, who were often minority communities at OWS, if not necessarily in society at large.

There were many people, even at the occupations themselves, who felt the progressive stack imposed identity politics on the movement and distracted from the larger issue of a tiny elite lording over the other 99% of the population. However, in the years since, we have seen time and again that OWS has lent weight to diverse causes as participants went back to their communities after the encampments were taken down.

From student debt to Hurricane Sandy to Black Lives Matter, many former occupiers have lent their talents to a variety of causes and are making a real world impact that a simple list of unrealistic demands never could have. Much of this enthusiasm was generated by the General Assemblies and the use of Formal Consensus.

Another argument that has been made against the Formal Consensus model is that it is too time-consuming, “in theory, consensus might include everyone in all deliberations, but in practice, the process greatly favored those who could devote limitless time to the movement.” It is also true, as some commentators have noted, that although it’s supposed to be a leaderless model, there is always a tendency to listen more closely to those who have natural charisma and speaking abilities.

It’s possible that technology can help with these issues and apps, like the Occupy and consensus inspired Loomio, could be truly revolutionary in facilitating Formal Consensus even over wide geographic areas. Perhaps the General Assemblies of the future could use this type of technology to connect millions and force international institutions and governments to act on widespread concerns like global warming.

There are other systems that can be used in lieu of Formal Consensus. One option is approval voting, which could be easily adapted to pass resolutions instead of electing individuals into leadership roles. One of its main virtues is its simplicity.

In traditional approval voting, when more than two candidates are running for election, voters get to choose whether they approve or disapprove of each individual candidate and all votes count. The winning candidate (or resolution) is the one with the most approval votes. No doubt in most cases, hand signals could be adapted for approving or disapproving resolutions put before a General Assembly rather than using paper ballots.

This system could be useful in dealing with the disruptive individuals and agents provocateurs who can make even the 90% consensus model eventually adopted at Zucotti Park unworkable. It also offers an efficient way to make decisions more quickly so that people with less time will be more easily able to contribute to the decision making process, especially when more immediate action is required.

This is not to say that approval voting need be seen as a replacement to Formal Consensus, in some cases it might work better, in others it might be used alongside it. As those days spent at Occupations have faded into memory we have had a chance to highlight some of the movement’s successes as well as its failures. Moving forward, Formal Consensus should be seen as the former but that doesn’t make it ideal for every situation or issue; we need to remember this or risk promoting the process over the ever evolving goals of the movement.

For a short video on how approval voting can work in everyday life, click here.

Derek Royden is a freelance writer based in Montreal, Canada with an interest in activism, politics and culture. His work has appeared on Occupy.com, Truthout, Antiwar.com, Gonzo Today and Skunk Magazine.