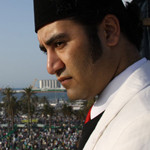 Illusions are at play in the modern tragedy that is the Greek economic system, particularly when it comes to notions of who benefits most from the latest bailout.

The big myth is that Greece overspent and the Greek government was reckless with its budgets, ultimately indebting Athens. It is true that Greek officials tried to gain influence and political support through spending. It’s also true that they signed lucrative contracts with local businesses.

Athens, however, is no exception here; this type of conduct has been displayed by politicians throughout the European Union and around the world.

The fact is that this is not what created the economic crisis in Greece. What is really taking place in Greece and the eurozone is something altogether different. The Greek bailouts appear to be part of a rigid restructuring of the EU that is placing other members under the control of Germany. 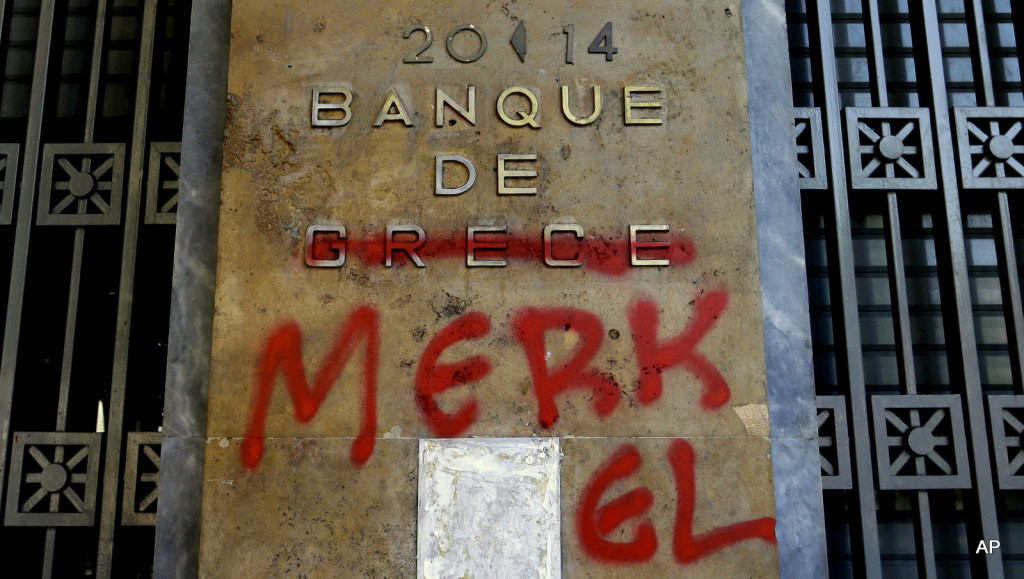 We are not dealing with national bailouts for failing economies, but with banking sector bailouts. Almost all the money that has been given to Greece, Cyprus, Ireland, and Portugal has gone to the banks of the creditor lenders.

In his 2013 documentary “The Secret Bank Bailout,” German investigative journalist Harald Schumann documents how the peoples of Ireland, Cyprus and Spain were not bailed out. The biggest recipients of the Irish bailout that saved Anglo-Irish Bank were British, French and German banks, including Union Investment Privatfonds, Rothschild et Compagnie Gestion, and Deutsche Bank. German and French banks accounted for 50 out of the 80 bondholders. The blogger Guido Fawkes revealed that the Irish government was protecting German investors when he published a list of the bondholders that he had obtained from an insider.

Éric Toussaint, the Belgian spokesperson for the Committee for the Abolition of Third World Debt (CADTM), accurately describes this in an interview with Rosa Moussaoui, explaining that the private banks managed to transfer their debts to the Greek people through the bailout arrangements in 2012.

Think Schumann and Toussaint are alone? Not by far. Even mainstream media and prominent analysts admit this is exactly what happened in Greece.

The bailouts were not “geared to the requirements of the people of Greece but to the needs of the international financial markets, meaning the banks,” economist Christian Rickens candidly reported in 2012 commentary in Der Spiegel.

The synopsis of Rickens’ commentary reads: “The bailout package about to be agreed by the euro finance ministers will help Greece’s creditors more than the country itself. EU leaders should channel the aid into rebuilding the economy rather than rewarding financial speculators for their high-risk deals.”

“As it stands right now, the Greek bailout and debt deal agreed by European Finance Ministers is a farce, a program designed to pay Greece’s international creditors and buy time to somehow engineer growth in a completely uncompetitive economic environment.”

Greece is being pillaged. Following a neoliberal economic formula, Greek publicly owned assets are forcibly being sold to foreign investors to pay the debts of the banks. All the means for the Greek government to generate income have been liquidated to private enterprises.

“[V]aluable Greek assets of [50 billion euros] shall be transferred to an existing external and independent fund like the Institution for Growth in Luxembourg, to be privatized over time and decrease debt. Such fund would be managed by the Greek authorities under the supervision of the relevant European institutions,” eurozone leaders demanded in mid-July. 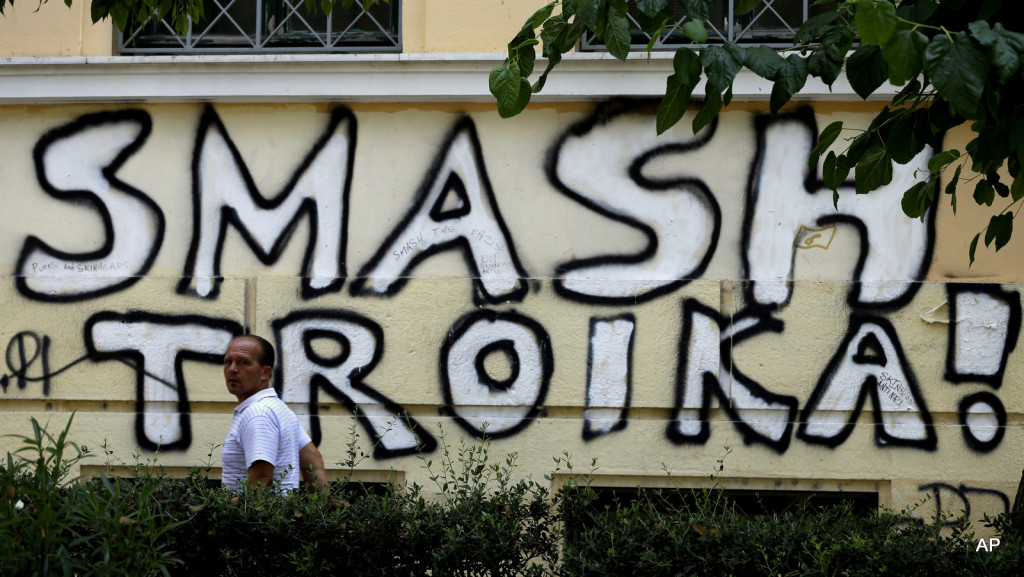 A pedestrian passes graffiti referring to the officials from the European Union, European Central Bank and International Monetary Fund, together known as the troika, in Athens, Wednesday, July 29, 2015. Representatives of Greece’s creditors, its European Union partners and the International Monetary Fund, are currently meeting officials in Athens to discuss the terms of the new bailout, designed to provide 85 billion euros over three years. (AP Photo/Thanassis Stavrakis)

On July 13, Time magazine reported that proposal geared toward “locking up Greek assets in a special fund emerged on Saturday from Germany.”  “The German Finance Ministry even suggested moving the titles to Greek assets to an ‘external fund’ in Luxembourg so that Athens could not renege on their sale,” the magazine reported.

Greek Prime Minister Alexis Tsipras and his Syriza-led government acquiesced to the demands to privatize more public property and infrastructure. Athens handed control of its public assets to German bankers. These assets, Time reported, will include publicly owned “buildings, possible areas of land, and even islands” that are home to Greek ruins and other archeological national treasures.

Why the insistent narrative about a troika? It may be that the European Central Bank is being presented as a separate entity that is beyond the power of the public, thus preventing the public from demanding any oversight.

The Greek Bailout Is for Germany and Western Europe, Not Greeks

Not only is it more than likely that German banks and creditors are the benefactors of Greek bailout(s), German corporations are also part of the picture. While the austerity regime that forced the Greek people’s living standards to fall has reduced their wages by hundreds of millions of euros, Greek media reports started mentioning that the Greek Administrative Court of Appeals ruled that the biggest tax evader inside the country was Germany’s biggest construction company, Hochtief Aktiengesellschaft. 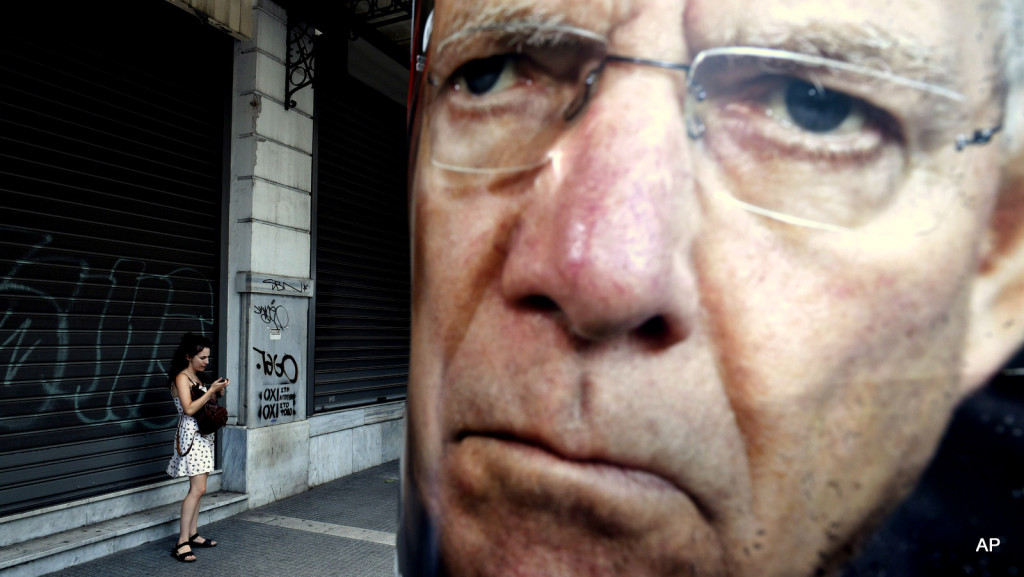 A woman uses her cell phone next to a poster depicting German Finance Minister Wolfgang Schaeuble placed by supporters of the No vote to the referendum in the northern Greek port city of Thessaloniki, Friday, July 3, 2015. Greeks will vote Sunday on whether to accept a proposal that creditors had made of specific reforms in exchange for loans. European Union institutions are framing it as a vote for or against the euro. (AP Photo/Giannis Papanikos)

In October, the Greek journalist Costas Efimeros reported what happened with Hochtief. The Athens International Airport that Hochtief had managed vis-à-vis Hochtief Airport Capital was ordered to pay over 500 million euros in value-added taxes or general sales taxes and dividend taxes. This was because the airport had been in a stretched out fiscal dispute over tax payments with Athens since 2001. The International Court of Arbitration in London ruled in 2013 that the international airport did not need to pay the taxes “until it makes a return on its initial investment,” according to Efimeros.

This is where the story gets complicated. Although the Greek government owns the 55 percent majority stake in the Athens International Airport, the contract Athens was forced to sign stipulates that Hochtief, with its 40 percent share through Hochtief Airport Capital, selects the management and runs the airport. The German management amplified its losses in the books, and then in 2013 it sold Hochtief’s shares to a Canadian insurance company. Hochtief would eventually merge with the Spanish construction and engineering giant GrupoACS, leaving what the Greek government calls a big “smudge” and cautiously transferring its Greek debt over.

Something is rotten in the Hellenic Republic. Athens has been acting schizophrenically. While Greek officials have threatened to leave the EU, they have solidified Greece’s ties to Brussels. Athens has ignored the results of the national referendum on the bailout and flirted with Moscow. Despite Syriza’s anti-war rhetoric and pro-Palestinian declarations, it has also moved Greece militarily closer with Israel.

Prime Minister Tsipras and his Syriza-led government held a national referendum to decide whether to accept the troika’s demands on July 5. Domestic opponents argued the referendum was unconstitutional, saying that under Article 44 of the Greek Constitution referendums could only concern: (1) significant national matters and (2) important social matters, with the exception  of fiscal matters. Greece’s economic crisis fell under the first clause of Article 44 as an important national issue. 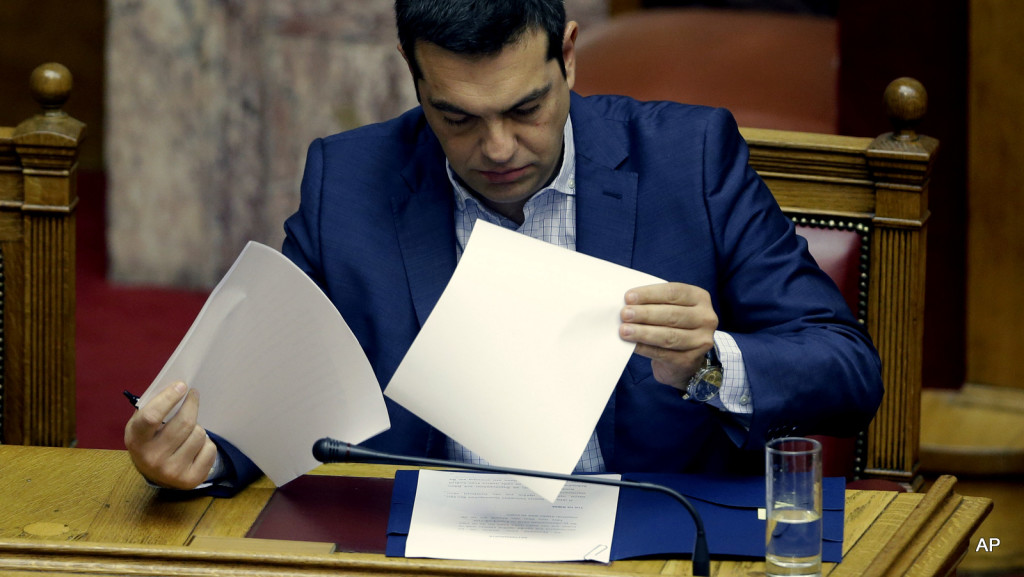 Greek Prime Minister Alexis Tsipras reads his notes as he prepares to answer opposition questions in parliament in Athens, on Friday, July 31, 2015. The third bailout will include a new punishing round of austerity measures heaped on a country reeling from a six-year recession and more than 25 percent unemployment. Tsipras has pledged to back the new cutbacks, while openly admitting that he disagrees with them.

After the referendum to reject the bailout terms was won, Tsipras and the Greek government went ahead and approved the bailout. There was internal mutiny in Syriza and many Greeks felt betrayed. It was argued that Athens only called a referendum to gain leverage in negotiations. But can a decision made by the majority of those Greeks who voted in a national plebiscite simply be ignored?

The Greek government has been involved in a strange dance where it has flirted with Russia and its BRICS (Brazil, Russia, India, China and South Africa) partners. Greece and Russia have even formed some type of agreement for extending the “TurkStream” natural gas pipeline, which is scheduled to take natural gas from Russia to Turkey via the Black Sea. The TurkStream will export Russian natural gas to the Greeks by eventually extending into Greece. Despite the courtship of Russia and the Syriza-led coalition government’s threats to leave the EU and the eurozone, the Greek government’s threats have proved to be mostly bluffs.

With the okay of Prime Minister Tsipras and Syriza, Greek Defense Minister Panagiotis Kammenos has even signed a deal with the Israeli military. Visiting Israel last month, Kammenos signed a status of forces agreement, which essentially means Greece will be hosting Israeli military personnel. What does this mean? The previous Greek government had allowed Israel to conduct long-range flight exercises simulating an attack on Iran. Is Tsipras allowing the Israelis to continue those preparations?

A United States of Europe?

The Greek tragedy also has a strange twist. Where there is crisis for some, there is opportunity for others. 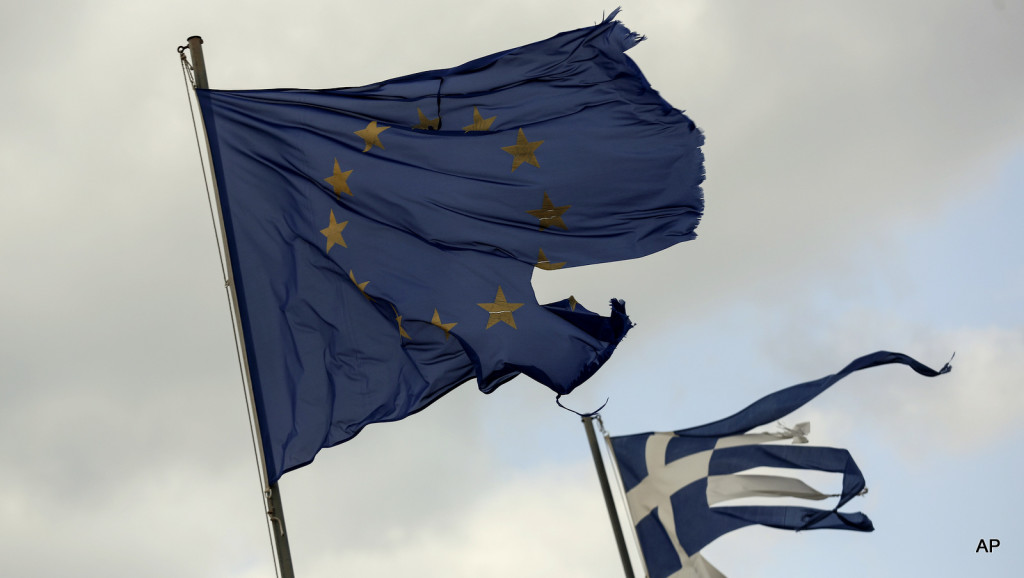 Ruined EU and Greek flags fly in tatters from a flag pole at a beach at Anavissos village, southwest of Athens, on Monday, March 16, 2015.

France has proposed that the 19 EU members in the eurozone form their own federal government complete with a single budget, one treasury department/ministry, and a unified parliament as a means of tackling the economic crisis in Greece. French President François Hollande penned an article in the Journal du Dimanche last month, calling for the formation of what is essentially a “United States of Europe” that would effectively relegate all existing governments in the eurozone into provincial or state-level governments.

Hollande’s proposal signals the consolidation of what appears to be German control over Greece and the other countries of the EU.