30 Jul 2015 – The cartoon below is from a few months ago but expresses how Kurds saw the role of the Turkish state towards ISIS and the conflict in Syria. Considerable evidence of support for ISIS from the Turkish state has been published in the international media over the last months. An ISIS commander told the Washington Post on August 12, 2014, “We used to have some fighters — even high-level members of the Islamic State — getting treated in Turkish hospitals.” 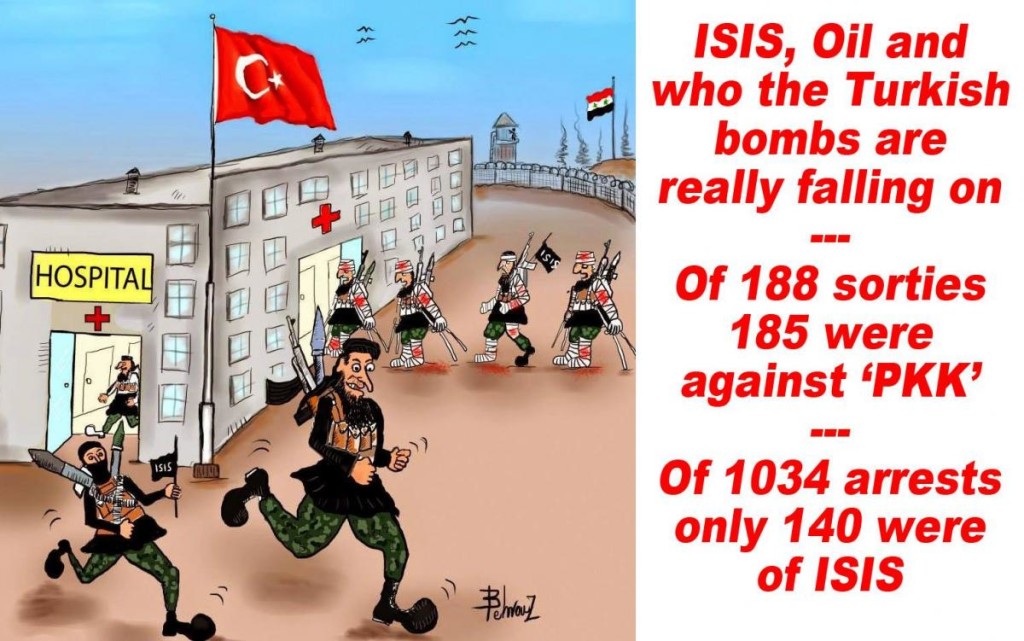 This Sunday the Observer revealed details of a US Special forces raid on an ISIS compound. “One senior western official familiar with the intelligence gathered at the slain leader’s compound said that direct dealings between Turkish officials and ranking ISIS members was now “undeniable”.” Oil smuggling was what that ISIS leader was co-ordinating with the Turkish officials and ISIS were getting an “estimated $1m-$4m per day in oil revenue”

Turkey now claims to have switched sides but the reality of both its bombing campaign and police raids in Turkey is that while they tell the international media they are targeting ISIS the targets are Kurds and the Turkish radical left.

One very clear illustration of whom Turkey has really gone to war with is found in this record of who has been arrested in the raids over the last days (21 – 28 July).

The Gülen movement are an oppositional group whose leader lives in the US and don’t belong to either camp so excluding them, we see that for every 1 ISIS arrest there were 6 arrests of people from the left including the Kurdish left.

In other words there has been no change of policy by the Turkish state, the primary objective remains the defeat of the Rojava revolution. Previously they had been hoping that ISIS could accomplish this for them, acting as a deniable proxy. However it recently became clear that ISIS is not currently capable of defeating the YPG/J.

Once US air support had stripped the advantage of the US armour and heavy weapons ISIS had captured at Mosul, ISIS first ground to a halt at Kobane and then were driven back. In addition media stories reporting on Turkish support for ISIS made it hard for the Obama administration to continue to pretend not to notice.

At the same time the US had found that the Kurdish forces in general, and the YPG/J in particular were the only reliable cannon fodder in the region willing to fight against ISIS on the ground, and thus provide accurate information for targeting air strikes. We use the word cannon fodder deliberately, the US is entirely cynical about its co-operation with the YPG/J as demonstrated in recent months by the refusal to provide them with heavy weaponry, but much more starkly in the last fews days as Obama clearly told Erdogan that the US would stand by while the Turkish air force bombed their only effective allies. In return the US gets the use of Incirlik air base.

What about the mass bombings carried out by the Turkish air force, are these also directed at ISIS in an effective sense or just for show? So far from the information we’ve been able to gather, what Turkey is doing here is even more blatant. The air war started with an air strike against ISIS, possibly involving 3 planes, which was announced to the media but which ISIS claimed had hit nothing. Since then it seems almost all the airstrikes, and there have been dozens of them (185 sorties against 400 targets according to Al Monitor), have been hitting Kurdish positions across Kurdistan, that is in South West Turkey, Iraq and even Syria. As the (UK) Independent put it yesterday “In the first two days of the Turkish campaign it sent only a few planes to bomb Syria while there were 185 air missions against about 400 PKK targets. ” Reporting on last night’s strikes, described as the heaviest yet, which hit only Kurdish positions even Reuters commented “Turkey’s assaults on the PKK have so far been far heavier than its strikes against Islamic State, fuelling suspicions that its real agenda is keeping Kurdish political and territorial ambitions in check, something the government denies.”

This is a good point to question the uncritical way the western media has taken up the Turkish state and media’s use of PKK as the designation of the armed wing. The reality is that the PKK is more of a political organisation, its relation to its armed wing, the HPG is not that dissimilar to the relationship between the Sinn Fein political party and the IRA in Ireland. However in Ireland both British and Irish states recognised the distinction and as a result even at the height of the war, although Sinn Fein was censored and its members subject to repression, it was never banned and membership was never illegal. Both Irish and British states wanted to leave a political door open to ending the conflict. The Turkish state on the other hand has not only waged a brutal counterinsurgency campaign in which 40,000 were killed but has relentlessly criminalised all radical Kurdish political organisation, essentially trying to close off the political road to peace.

Not only was the PKK banned but even broader Kurdish political formations like the KCK were also targeted. The KCK is the formation set up to implement the idea of “democratic confederalism” which draws from the theories of libertarian municipalism, social ecology, and Communalism developed by the American anarchist political philosopher Murray Bookchin. Which is broadly similar to what is being implemented in Rojava. Some 7748 people were arrested for KCK involvement in Turkey between April 2009 and October 2011, those charged were charged with membership of an illegal organization under Article 314 of the Turkish Penal Code.

We are not insisting that there is no connection between the PKK and the HPG. That would be quite stupid. Nor are we insisting there is no connection between the PKK and KCK. But we think it’s a mistake to reproduce the Turkish state’s insistence that an armed military organisation is identical to a political party which is identical in turn to the mass assembly formation that party has launched. More than a mistake, confusing the three provides ideological cover for the repression of the KCK in particular. Part of the reason for maintaining this distinction is also that it is clear that these different formations have distinct methods and tactics even if the fact of ongoing repression re-enforces the need to maintain a unified public face. The actions of the Turkish state are designed to provoke a response from the more militaristically inclined, a response that will then be used to justify further escalation.

What is the Turkish state up to?

If as seems likely the bombings of the HPG and the large scale police arrests of PKK, KCK and other leftists provokes an armed response than Erdogan probably hopes to call fresh elections in a highly polarised situation where the HDP will not get the required 10%. The AKP will then be almost certainly returned with a majority of seats and maybe even the super majority it needs to impose a new constitution unilaterally. On the other hand polls shows that a large majority of people in Turkey are against an invasion of Syria and indeed even among AKP votes more would prefer to see the PYD win out than ISIS.

It was always clear that the Rojava revolution was a fragile thing, operating in a gap created by the Syrian civil war between major military powers. The actions of the Turkish state are designed to shut that gap. The US is co-operating in that project even if it is also for now using the YPG/J as cannon fodder. The only thing that can defeat that project is a revolt by a sizeable section of the population in Turkey backed up by large protests in the US and Europe against the cynical role that the US and NATO are playing.

Andrew is an anarchist writer, speaker and organiser who is currently the national secretary of the Workers Solidarity Movement. He has spent most of his life in Dublin, Ireland but has lived for short period in London, England and Ontario. He’s spoken, protested or been otherwise briefly active in the US, Norway, France, Spain, Italy, Turkey, Czech republic and Mexico. In that time he has also been a member of Common Cause & NEFAC. His activity has covered nearly four decades on issues which included unions, community organising, LGBTQ, pro-choice, anti-imperialist, environmental, anti-racist, international solidarity, squatting and other struggles. His writing is strongly informed by all these experiences and all the places he has been active in as well as the others he has travelled to.