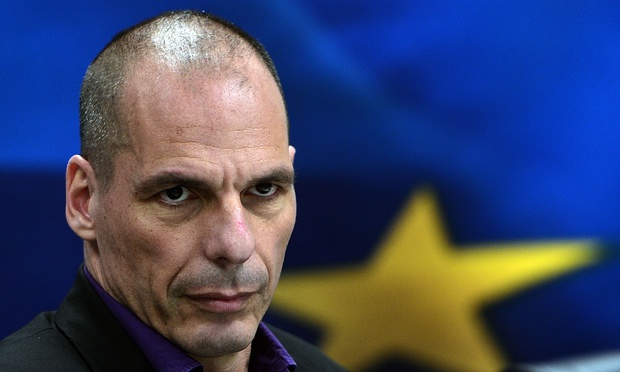 Varoufakis said the Greek parliament had pushed through an agreement with international creditors that would allow oligarchs, who dominate sections of the economy, to generate huge profits and continue to avoid paying taxes.

The outspoken economist published an annotated version of the deal memorandum on his website on Monday, arguing throughout the 62-page document that most of the measures imposed on Greece would make the country’s dire economic situation worse.

His first insertion makes clear his dismay at the dramatic events of last month, when the Greek prime minister, Alexis Tsipras, was forced to accept stringent terms for a new bailout amid calls from Germany for Greece’s temporary exit from the eurozone. Varoufakis, who resigned from his post in June, said: “This MoU [memorandum of understanding] was prepared to reflect the Greek government’s humiliating capitulation of 12 July, under threat of Grexit put to Tsipras by the Euro summit.”

Folllowing the July summit, Athens agreed a three-year memorandum of understanding last week that will release €86bn of funds, much of it to repay debts related to two previous rescue deals. In exchange, Athens will implement wide-ranging reforms including changes to the state pension system and selling off government assets.

But Varoufakis said a reform programme overseen by the troika of lenders – the European commission, the International Monetary Fund and the European Central Bank – would only enslave ordinary workers and families by imposing tough welfare cuts while letting foreign companies grab domestic assets cheaply through privatisations. He said billionaire business owners in Greece would also escape scrutiny.

In the memorandum it says: “Fiscal constraints have imposed hard choices, and it is therefore important that the burden of adjustment is borne by all parts of society and taking into account the ability to pay. Priority has been placed on actions to tackle tax evasion.”

In answer, Varoufakis said: “As long as it is not committed by the oligarchs in full support of the troika through their multifarious activities.”

The memorandum goes on to say: “The authorities plan to benefit from available technical assistance from international organisations on measures to provide access to health care for all (including the uninsured).”

To which Varoufakis responds: “ie using advice of well paid foreign ‘technocrats’ as a substitute for funding, nurses, doctors and equipment”.

The deal memo also refers to rolling out a “basic social safety net” in the form of a guaranteed minimum income (GMI]. That provision “would be great, except that not one fresh euro will be made available for the GMI program whose funding will be siphoned off existing benefits provided by the Greek state, e.g. child benefit,” says Varoufakis.

As finance minister, Varoufakis opposed any deal with Brussels that he believed would consolidate the strategy of the previous five years of bailouts. He argued that combining financial aid with severe cuts to state spending was the main reason why Greek unemployment had soared to more than a quarter of the working population and shrunk the economy by 25%.

Varoufakis was succeeded at the finance ministry by his colleague Euclid Tsakalotos who went on to negotiate the current agreement.

Varoufakis said the deal was flawed in many ways as he picked his way through the memorandum. For instance, property taxes based on out-of-date and inflated values would hit ordinary households; that a reliance on expensive advisers and consultants would deny the health service vital cash; and a reduction in investment funding by Brussels would stifle the recovery.

He said the troika had wrecked the pension system, which remains an essential economic prop for many households. Warning that removing state subsidies from pensions would create a vicious circle, he said: “The pension cuts necessary will be so large that aggregate demand in Greece will fall again so much that employment will suffer further thus hitting again the pension funds.”

His intervention came as the German parliament prepares to vote on the bailout agreement on Wednesday. If, as expected, German MPs approve the deal it will pave the way for the first disbursement of aid on Thursday, allowing Greece to meet a €3.2bn payment due to the European Central Bank.

Meanwhile, the Greek government appears likely to call a confidence vote following a rebellion among lawmakers from the ruling Syriza party over the country’s new bailout deal, senior ministers said on Monday.

Energy Minister Panos Skourletis described such a parliamentary vote as “self-evident” following Friday’s rebellion when almost a third of Syriza deputies abstained or voted against the agreement.

With Syriza’s left wing showing little sign of returning to the party fold, Skourletis also raised the possibility of early elections should Tsipras lose a confidence motion. Tsipras had to rely on opposition support to get the bailout deal through parliament, and another minister argued that elections would be a way of achieving political stability.

Phillip Inman is economics correspondent of the Guardian and Observer. He is the author of Managing Your Debt, a Which? essential guide.