I’d always been scared of these great creatures but while filming in the Azores, I jumped into the ocean amid a pod of whales – and met another sentient being. 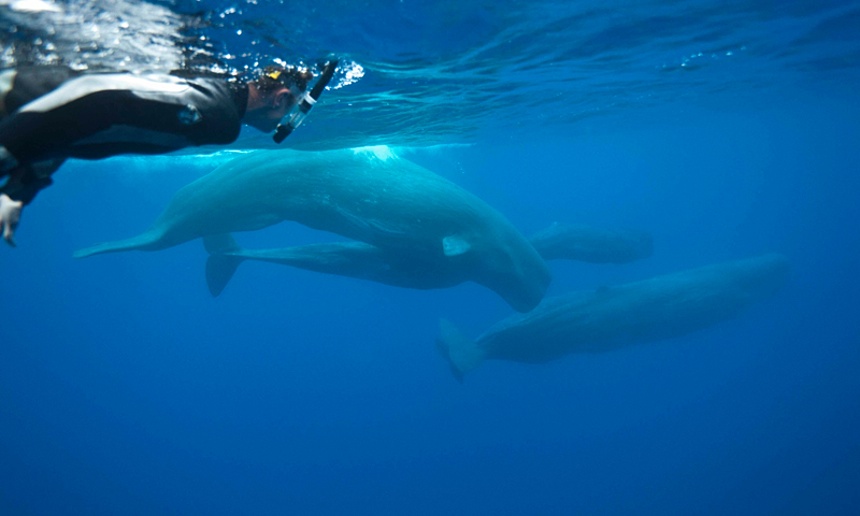 10 Sep 2015 – I was born and brought up by the sea – indeed, my heavily pregnant mother nearly went into labour on a visit to a submarine in Portsmouth, and I was almost born underwater. Yet I never learned to swim. I was simply too scared of the water, and what it might contain. I trace my terror to a memory of something I never saw: the bath in my mother’s childhood home, along the side of which my grandfather – whom I never knew – had painted a great spouting whale, a veritable Moby-Dick. The image of that unseen whale haunted me, to the extent that I didn’t even like taking a bath. Throughout childhood and into my teenage years, this fear dominated my feelings towards the sea. It was only when I was in my mid-20s, unemployed in London, that I decided to challenge myself. In a tiled Victorian pool in Hackney, an elderly lady in a rubber hat took pity on me. This Esther Williams of the East End showed me how the water could bear my body up, gloriously. I was hooked.

Cut to the Azores, the mid-Atlantic, 20 years later. The water off these black basalt shores drops to half a mile deep within a few hundred feet; further out, it falls to three miles. I’d gone there with a film crew, to make a BBC Arena documentary about the true story behind Moby-Dick. Soon after leaving the harbour, a pod of common dolphin began to ride our bow. The water was so clear there seemed to be nothing between them and me. And they appeared to be leading us somewhere. Suddenly, our young Azorean captain, Joao, stopped the boat. Ahead were what looked like logs.

For as long as I’ve feared the sea, I’ve also been fascinated by whales, and I’d seen hundreds of whales in the wild by this time – but never sperm whales. They did not compute with anything animate. It was only when they raised their flukes or their great square heads that they revealed themselves: a dozen or more of the world’s largest predators. Yet they seemed to be true shapeshifters; they even seemed to change colour: ebony black one moment, dove grey the next, or even the colour of cocoa.

The idea was to film the whales underwater. Joao urged me over the side – I didn’t even have time to put my wetsuit on. Jill, our camerawoman, followed, but was worried that her camera was dragging her down and was pulled out by Martin, our producer. (He had a vested interest; she’s his wife.) Adam, our director, told me to come back. But I wasn’t coming back. This was my chance to share the water with the most legendary, and most hunted, of all cetaceans. Almost immediately, I realised my first mistake. The sea, which looked so clear from above, was filled with plankton. It was like looking into another universe of hallucinogenic stars and planets, shading from deep blue to utter blackness. I’d only gone 20 yards when I saw the animals; my vision was wall-to-wall whale. My heart beat hard against my ribcage; my body was flooding with adrenaline. I really did feel as though my life was flashing before my eyes. I also lost control of my bodily functions. Then I thought, “Oh God, peeing in the water is the sort of thing that really gets sharks going.”

At that point, the largest of the whales – an animal I later knew to be their matriarch – detached itself from the pod, and came swimming directly at me. Now I really was scared. Of all whales, the sperm whale is the only one able to swallow a human being – and has done so. Whalers whose bodies were retrieved from dead whales were said to have been turned white by the animals’ gastric fluids. “OK”, I said to myself, “either it’s going to ram me with that huge head – or it’s going to open its mouth at the last moment”.

Everything was happening in slow motion. Then I felt – rather than heard – the whale’s sonar moving down my body – click-click-click – like an MRI scanner. The sound reverberated through my skull, my sternum, my whole skeleton. It was ironic. As a writer, I’d spent years trying to describe whales, and here was a whale, trying to describe me. The whale was now so close I could easily have reached out and touched her. But that was not part of the contract. She looked at me, with an eye the size of a grapefruit, with absolute sentience and curiosity, wondering what I was.

It was intensely placid, this stilled moment, everything brought down to this, in this amniotic ocean. A few months before, I’d lost my mother. She’d always told me that at the end, she’d walk down to the shore and into the sea. But she died in a hermetically sealed hospital room. Now I was faced with this great grey mother. I felt like an orphan found – for all that I knew what we’d done to her kind. And all I could think of was to say, “Sorry”. For everything. 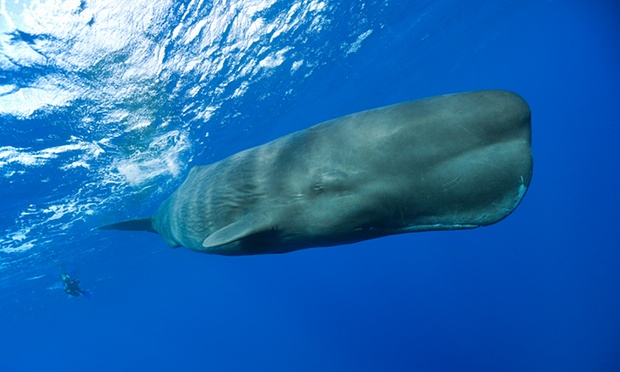 ‘Of all whales, the sperm whale is the only one able to swallow a human being – and has done so.’ Photograph: Reinhard Dirscherl/Visuals Unlimited/Corbis

Philip Hoare is a writer and cultural historian. He is the author of Leviathan or, The Whale and The Sea Inside. He blogs here. @philipwhale