“One should be in harmony with, and not rebellion against, the strength of the opponent.” 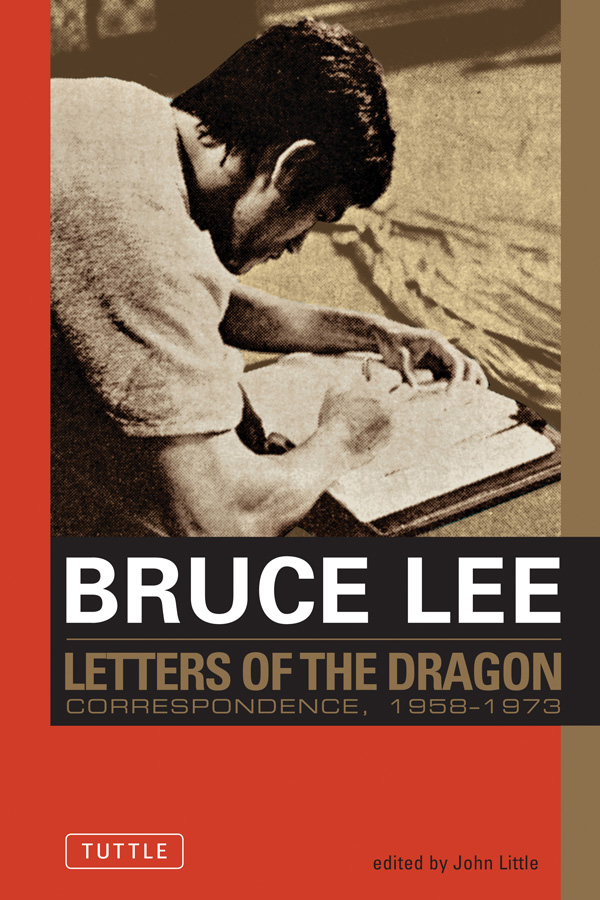 When he emigrated from Hong Kong to America in 1959, Bruce Lee (November 27, 1940–July 20, 1973) adapted the ancient Chinese conceptual martial art Wing Chun into his own version, Jun Fan Gung Fu, literally translated as “Bruce Lee’s Kung Fu,” and popularized it in America. Over the course of his short life, he became not only a trailblazing martial artist but a modern philosopher whose ideas on personal development and the cultivation of character have continued to inspire generations.

On his ascent to superstardom, Lee was too poor to afford long-distance phone calls. Instead, he turned to letters not only as a medium for keeping in touch with his loved ones and collaborators but also as a creative sandbox for fleshing out the ideas that informed his philosophy. Those letters are now collected in Bruce Lee: Letters of the Dragon (public library) — the most direct record of the views, beliefs, and ideals that shaped Lee’s enduring legacy.

In a 1964 letter to Taky Kumura, his first student and one of his dearest friends, 24-year-old Lee outlines the learning process of gung fu. Under the heading “Self-cultivation,” he considers the essential purpose of leisure in spiritual development and writes:

The point where [one is] to rest being known, the object of pursuit is then determined; and, that being determined, a calm unperturbedness may be attained too. To that calmness there will succeed a tranquil repose. In that repose there may be careful deliberation, and that deliberation will be followed by the attainment of the desired end.

Wishing to cultivate oneself, one first rectifies his heart.

Wishing to rectify his heart, one seeks to be sincere in his thoughts.

Wishing to be sincere in his thoughts, one first extends to the utmost of his knowledge — such extension of knowledge lies in the investigation of things. 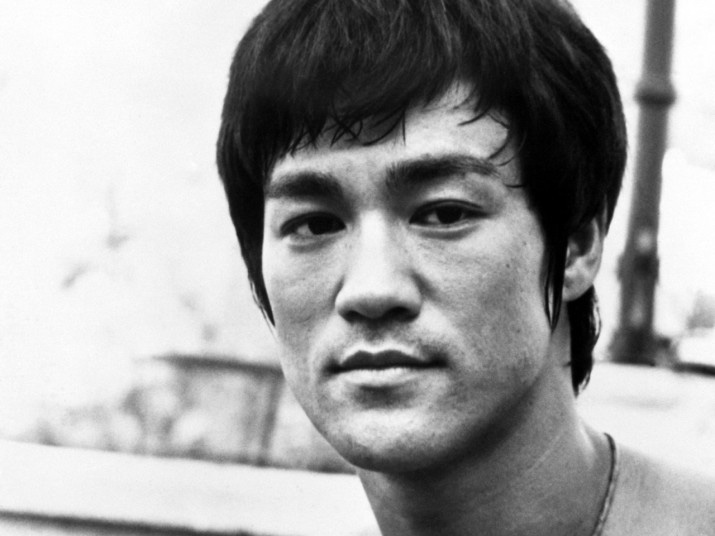 Only in repose, Lee points out, can the mind begin to investigate the nature of things, empty itself of interferences, and learn not to let external triggers induce internal states of fear, anger, sorrow, and anxiety. He writes of this contemplative space:

A gung fu man rests therein, and because he rests, he is at peace. Because he is at peace, he is quiet. One who is at peace and is quiet, no sorrow or harm can enter; therefore his inner power remains whole and his spirit intact. 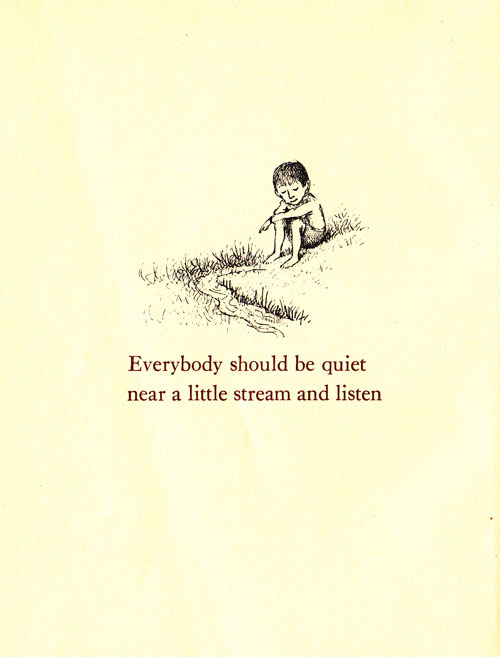 Illustration by Maurice Sendak from ‘Open House for Butterflies’ by Ruth Krauss.

Under the captions “NO MIND” and “NO THOUGHT,” Lee adds:

Discard all thoughts of reward, all hopes of praise and fears of blame, all awareness of one’s bodily self. And, finally, [close] the avenues of sense perception and let the spirit out, as it will.

The highest skill operates on an unconscious level.

Sincere thought means thought of concentration (quiet awareness). The thought of a distracted mind cannot be sincere. Man’s mind and his behavior are one, his inner thought and outer expression cannot contradict each other. Therefore a man should set up his right principle and this right mind (principle) will influence his action.

Under the heading “Yielding,” he writes:

Yielding will overcome anything superior to itself; its strength is boundless.

The yielding will has a reposeful ease, soft as downy feathers — a quietude, a shrinking from action, an appearance of inability to do (the heart is humble, but the work is forceful). Placidly free from anxiety one acts in harmony with the opponent’s strength. One does not move ahead but responds to the fitting influence.

In a sentiment he would later hone into his famous metaphor for resilience, Lee adds:

Nothing in the world is more yielding and softer than water; yet it penetrates the hardest. Insubstantial, it enters where no room is. It is so fine that it is impossible to grasp a handful of it; strike it, yet it does not suffer hurt; stab it, and it is not wounded. Be the water. 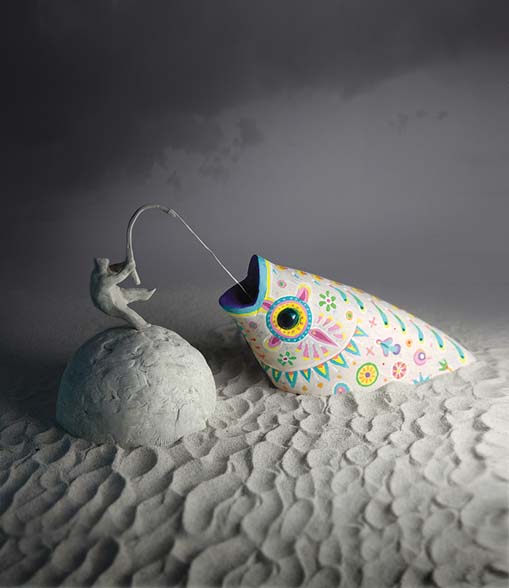 Illustration by Shaun Tan for a special edition of the Brothers Grimm fairy tales.

Under the heading “Law of Non-Interfering,” Lee elaborates on this philosophy of yielding as an act of strength:

One should be in harmony with, and not rebellion against, the strength of the opponent.

The strongest is he that makes use of his opponent’s strength — be the bamboo tree which bends toward the wind; and when the wind ceases, it springs back stronger than before.

Writing to his editor at Black Belt magazine on September 2 of that year, Lee draws a graphic representation of this idea and elaborates on the notion of strength and suppleness as complementary rather than contradictory forces: 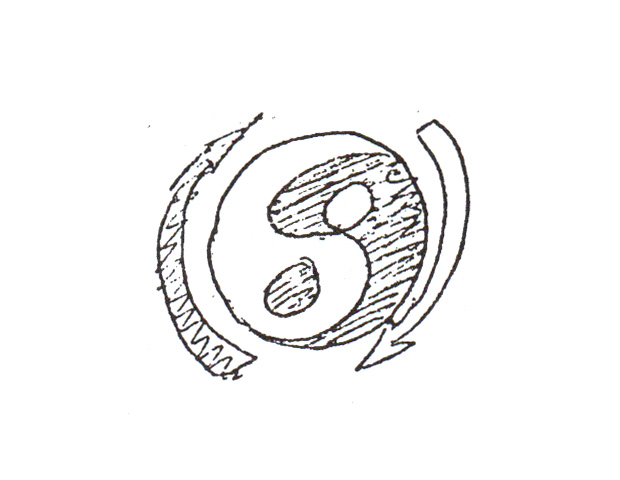 Just as an object needs a subject, the person in attack is not taking an independent position but is acting as an assistant. After all, you need your opponent to complete the other half of a whole.

The gentleness/firmness is one inseparable force of one unceasing interplay of movement. If a person riding a bicycle wishes to go somewhere, he cannot pump on both [of] the pedals at the same time or not pump on them at all. In order to move forward he has to pump on one pedal and release the other. So the movement of going forward requires this “oneness” of pumping and releasing, and vice versa, each being the cause of the other.

Bruce Lee: Letters of the Dragon is a trove of timeless wisdom in its entirety. Complement it with the great Zen master D.T. Suzuki on what freedom really means, Aldous Huxley on the necessity of integrating mind and body in education, and a biologist-turned-Buddhist-monk and his philosopher father in conversation about the true measure of personal strength.