Children of the Occupation 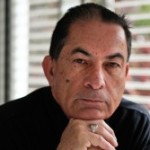 A video tells the world how a 12-year-old child incredibly escapes the clutch of an Israeli soldier. Hundreds more are far less fortunate, to the point of death.

It has been a truism since the dawn of theatre: Children upstage everyone else. “Vengeance … for the blood of a child, Satan has yet to devise,” cried Israel’s national poet Chaim Nahman Bialik in his poem On the Slaughter. A thousand reports on the crimes of occupation will always pale in contrast to one picture of a small child dead or detained or abused or injured.

Such was the iconic video clip that went viral recently: an Israeli soldier, masked and armed, tries to detain a Palestinian child whose arm is in a cast. The child looks terrified as his mother, a teenage girl and another few women try to prevent the soldier from taking him into custody.

The women struggle wildly, tearing the mask from the soldier’s face, biting his hand. They are unarmed and pose no mortal danger to the soldier.

This happened on a recent Friday during the weekly demonstration in the Palestinian village of Nabi Saleh protesting against the seizure of the village’s spring by settlers who have denied access to the Palestinian residents ever since.

This time the story had, unusually, a happy ending. Perhaps because it was it was being recorded on video, or for some other, unknown reason, the soldier behaved with relative restraint and made no attempt to use his gun. His commander then instructed him to release the child, 12-year-old Mohammed Tamimi –  but not before tossing a stun grenade at the demonstrators, after which the fellow soldiers withdrew. 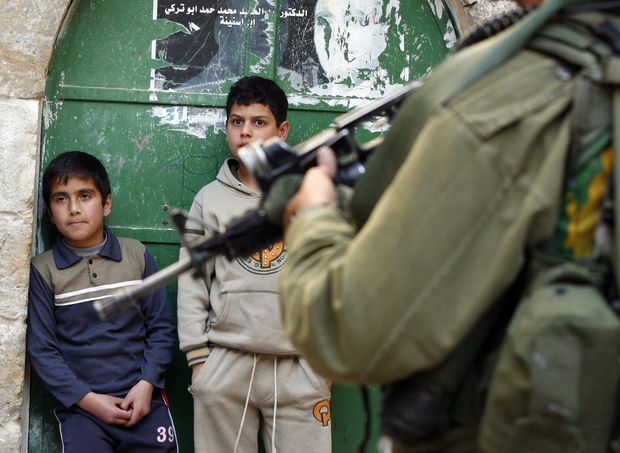 Photo: An Israeli soldier stands guard as Palestinian children look at a protest against Jewish settlements, near Beit Romano settlement in the city center of the occupied West Bank town of Hebron on 24 April, 2010 (AFP).

When the video of this incident went viral, evoking an unusual flurry of public discussion among an ordinarily indifferent Israeli public, the Israeli army tried to claim that young Tamimi had been throwing stones at the soldiers – a claim countered by an eyewitness, Israeli peace activist Jonathan Pollak, who had joined the Nabi Saleh protest.

The Israeli army then claimed, even more incredibly, that the soldier who had tried to detain Tamimi did not know he was a child. Given the evidence of the video, distributed worldwide, this claim is ridiculous.

Predictably, most responses in Israel addressed the soldier’s “restraint,” framing it in terms of the Israeli army’s defeatism and the humiliation of its soldiers. Government ministers, legislators and other public figures argued that the soldier’s hands were tied due to overly stringent open-fire regulations, which are nothing of the kind, and that the soldier should have shot Tamimi.

Broad swaths of the Israeli right wing are too bloodthirsty to accept (even relatively minor) restraint by Israeli soldiers, even in dealing with a Palestinian child, and would have preferred that the soldier shoot to kill.

Other Israelis were suddenly confronted by the inhumanly ugly and pitiless nature of the occupation for which they are responsible, since it is maintained in their name, on their behalf.

There was the one picture worth a thousand words: the terrified child gripped by the soldier, whose mask has been torn from his face by the child’s mother – exposing the naked, ugly reality of occupation. The most moral and powerful army in the Middle East against a child of 12.

Most Israelis, however, concerned themselves with the lesser question of how the soldier ought to have behaved in this complicated situation. Very few, if any, asked what he was doing there in the first place – which is the only question that should have been asked, and was not.

If the soldier had shot Tamimi and killed him, with no cameras there to record it, there would have been no story from the standpoint of Israeli media and public opinion.

The Israeli army would have claimed that the soldier was in mortal danger, most Israelis would never have doubted that account in the slightest, the military police would have launched an “investigation,” typically without beginning or end, and the world of the occupation would have marched onward, regardless.

Thus it was a few weeks earlier, for example, when Colonel Yisrael Shomer, commander of the Binyamin Brigade, fatally shot Mohammed Kasbeh, age 17. Someone threw rocks at the commander’s jeep –  maybe Kasbeh, maybe not – and the brigade commander got out of his vehicle and chased Kasbeh, shooting him in the back, killing him as he fled. The brigade commander was no longer in any sort of mortal danger, yet he used live ammunition.

This is the example provided by Israeli army officers, and this is how they are expected to behave.

The brigade commander did not know, when he aimed and fired, that Mohammed would be the third child of Sami Kasbeh killed by Israeli soldiers after stone-throwing incidents. Two of Mohammed’s brothers had preceded him: Tamer, 14, and Yasser, 10, killed within 40 days of one another in 2002, a very bloody year.

Now, on 3 July, the Israeli officer had made Mohammed’s a bereaved family for the third time.

Israel, however, was not especially interested in this incident, and the commander has already been promoted to another job, with the investigation of this case yet to be concluded and despite the fact that the investigators are in possession of video from security cameras showing unequivocally that the young Mohammed was shot while fleeing, when the commander was in no danger.

Returning to young Tamimi: had he been arrested by the soldier, his fate would still have been a cruel one. Not for nothing did the women of that village struggle so stubbornly to prevent his detention. Defense of Children International has reported that Israel arrests between 500 and 700 Palestinian children and youths annually.

According to data from B’Tselem, a non-profit organisation that documents human-rights violations in the occupied territories, there were at the end of June 160 Palestinian minors in Israeli detention for one reason or another, mainly for suspected stone-throwing; another 13 had been arrested for illegal entry into Israel.

Of these minors, 70 had been tried in a court, 81 detained until the conclusion of proceedings against them, and nine imprisoned for various periods of time.

During their detention and trial they generally do not enjoy the rights to which they are entitled by law and under international treaties governing the interrogation and detention of minors.

Israeli soldiers or police often arrest Palestinian children younger than the legal age of responsibility (12). Thus, for example, in July 2013 in Hebron they arrested Wadi’ Maswadeh on suspicion of throwing stones at soldiers. Maswadeh was five years old. His father was handcuffed right in front of him, until the two were released a while later.

Maswadeh was not the only such child arrested illegally, prior to having attained the legal minimum age under Israeli law.

A number of reports, including an Australian documentary on Australian television’s current affairs programme “Four Corners,” have dealt with the difficult issue of Israel’s detention of Palestinian children – but nothing has changed.

In the Jordan Valley near the Ma’aleh Adumim settlement and in the Ramallah vicinity, there are scores of children sleeping under the open skies. No one seems concerned about their fate.

In Gaza, it has now been one year since Israeli shelling killed four children from the Bakr family on the beach during last summer’s war on Gaza. Ismail, Ahed, Zakariya and Mohammed Bakr, all between nine and 11 years old, were the boys on the Gaza beach whose killing was witnessed by foreign journalists nearby.

At this writing, the toddler Ahmed Dawabshe, age four, still struggles for survival, recovery and rehabilitation in an Israeli hospital. His father and baby brother were burned to death in their home in Duma by four Israeli extremists, yet to be arrested, and his mother is still fighting for her life.

Little Ahmed Dawabshe, badly burned and wrapped in bandages from head to toe, cries in vain for his mother, whose life hangs by a thread, and for his father, who will never come to him again.