Disposable People: Obama, the TPP, and the Betrayal of Human Rights 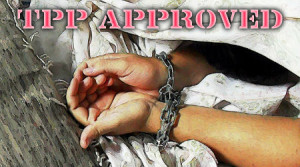 31 Aug 2015 – During the lead-up to the vote on the Trans-Pacific Trade Partnership (TPP) that the President narrowly won, Obama and his surrogates consistently suggested that those in labor and other allied groups opposing the deal were “fighting the last war” and were against “the most progressive trade agreement the world has ever seen.” Indeed, he even went so far as to accuse critics like Senator Elizabeth Warren of “making stuff up”.

As we know, Obama defeated labor and the progressive wing of the Democratic Party and, in concert with Republicans and just enough New Democrats like San Diego’s own Scott Peters and Susan Davis, he succeeded in forwarding the multinational corporate agenda.

Since that time the gaze of the national media has turned elsewhere and, as negotiations have encountered difficulties, the administration has sunk to new lows in its zeal to finish the deal on the TPP.

Indeed, after scolding critics and pooh-poohing concerns about human rights, it appears that the proponents of “the most progressive trade deal in history” aren’t so politically correct that they would stand in the way of slavery in the name of ideological purity if it might sink the TPP.

As Reuters reported in a piece that will surely make Project Censored’s list of the most under-reported stories of 2015:

[An] examination, based on interviews with more than a dozen sources in Washington and foreign capitals, shows that the government office set up to independently grade global efforts to fight human trafficking was repeatedly overruled by senior American diplomats and pressured into inflating assessments of 14 strategically important countries in this year’s Trafficking in Persons report.

In all, analysts in the Office to Monitor and Combat Trafficking in Persons – or J/TIP, as it’s known within the U.S. government — disagreed with U.S. diplomatic bureaus on ratings for 17 countries, the sources said.

The analysts, who are specialists in assessing efforts to combat modern slavery – such as the illegal trade in humans for forced labor or prostitution – won only three of those disputes, the worst ratio in the 15-year history of the unit, according to the sources.

As a result, not only Malaysia, Cuba and China, but countries such as India, Uzbekistan and Mexico, wound up with better grades than the State Department’s human-rights experts wanted to give them, the sources said.

Last year, the State Department listed Malaysia among the world’s worst human trafficking nations because of “limited efforts to improve its flawed victim protection regime.” The report described a horrendous life for Malaysia’s foreign workers, threatened by large smuggling debts and confiscated passports that put them at the mercy of recruiting companies. Women in particular, recruited for hotel or beauty salon work, are routinely coerced into the commercial sex trade.

The conviction rate for smugglers has actually fallen in Malaysia since last year’s report, suggesting no improvement on fighting human trafficking. One house of Malaysia’s parliament did pass legislation giving more protections to slavery victims, but it further criminalizes something that’s already illegal. The problem has always been sustained enforcement. The U.S. Ambassador to Malaysia, Joseph Yun, criticized the lack of will to defend trafficking victims as recently as this April. Yet an unnamed administration official told Reuters that the U.S. had been working closely with Malaysian leaders to remedy the problem.

The political implications of reclassifying Malaysia suggest another rationale for the upgrade. During the markup of trade promotion authority (aka “fast track”), signed into law by the president last month, Sen. Robert Menendez (D-NJ) passed a provision denying access to fast-track procedures for any trade partner in Tier 3 on the human trafficking report.

As Zach Carter’s reporting in “Obama Shrugs Off Global Slavery to Protect Trade Deal” in the Huffington Post suggests, this move was about as craven as you can get:

The Obama administration outraged human rights advocates on Monday by removing Malaysia from its list of the world’s worst human trafficking offenders — a move that the activists said damages U.S. credibility — simply to boost the president’s trade agenda.

“The Administration has turned its back on the victims of trafficking,” Sen. Robert Menendez (D-N.J.) said in a written statement. “They have elevated politics over the most basic principles of human rights.”

Hundreds of Democrats and a handful of Republicans had previously urged the State Department to maintain Malaysia’s ranking as a “Tier 3” human trafficking violator. For years, the Malaysian government has largely turned a blind eye to sex slavery involving men, women and children. Forced labor is rampant in several sectors of the country’s economy, particularly the electronics industry. In April, mass graves holding more than 130 human trafficking victims were discovered near the country’s northern border with Thailand. That same month, the U.S. ambassador to Malaysia said the government needed to take human trafficking prosecution more seriously. Nevertheless, the State Department officially upgraded Malaysia’s status to Tier 2.

By ignoring modern day slavery to advance the TPP, Obama has given the lie to the rhetoric of TPP advocates with all their bluster about how this trade deal was somehow about a more progressive world order with regard to labor and human rights. As the Citizens Trade Campaign noted in their statement on the matter, “The administration’s alleged willingness to turn a blind eye to trafficking abuses in Malaysia in order to get the TPP done also does not bode well for the hope of any enforcement of labor and environmental provisions were the TPP actually enacted.  If the administration were serious about using the TPP to enforce basic rights, they would make such enforcement a prerequisite to joining.”

In many ways, the Obama administration’s complicity with global slavery in the name of furthering the neoliberal economic agenda is not surprising. As Kevin Bales documents in his seminal work, Disposable People: The New Slavery in the Global Economy, today’s bondage is no longer about race but rather economics.

More specifically, modernization and rapid economic globalization in concert with an exploding population has created a situation where labor markets have been flooded with desperately poor people, 27 million of whom have ended up in some form of slavery. According to Bales, “Modern slaveholders are predators keenly aware of weakness; they are rapidly adapting an ancient practice to the new global economy.”

And counter to the propaganda put forth by hegemonists such as Thomas Friedman, the neoliberal regime that the TPP perpetuates has not made the world flatter for slaves, it has only made the elites richer and the poor more disposable. And along the way, it has allowed many multinational corporations to extract profit from slave labor that is hidden by multiple layers of middlemen who provide plausible deniability for our faceless masters.

But slavery is not the problem of the lords of the global village; it is merely an externality—a cost that somebody else has to pay.

Thus despite all the stories we like to tell ourselves about human dignity, at present we live in a world where the market is the final measure of all things and anything that stands in the way of profit is ultimately disposable.

Jim Miller, a professor at San Diego City College, is the co-author of Under the Perfect Sun: The San Diego Tourists Never See and Better to Reign in Hell, and author of the novel Drift. His most recent novel on the San Diego free speech fights and the IWW, Flash, is on AK Press.