After scuffles in the normally staid Japanese parliament, human barricades and weeks of noisy citizen protests outside, lawmakers passed controversial legislation early Saturday [19 Sep 2015] that will allow the nation’s troops to fight overseas for the first time since World War II. 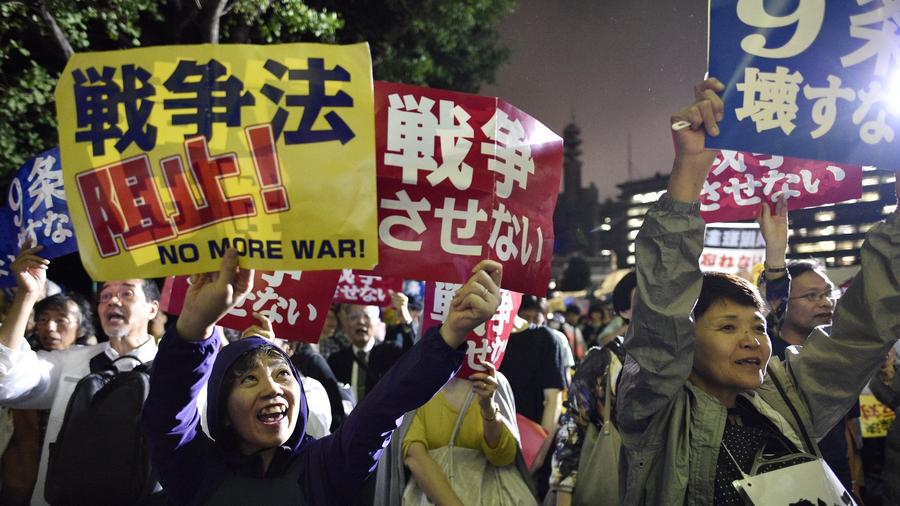 The bills were passed after desperate attempts by the opposition to delay the votes. Despite the late hour, thousands of protesters missed their last trains home to demand that the measures be scrapped. A strong police presence added to the tension.

The coalition government of Prime Minister Shinzo Abe had argued for months that the measures were needed so that Japan could come to the aid of its allies, particularly the United States, in the event of a conflict that imperiled both countries.

But numerous opinion surveys showed only 30% of the public supported the legislation, which amounts to a significant reinterpretation of Japan’s pacifist constitution adopted after its defeat in World War II.

Yoshihide Suga, chief Cabinet secretary and government spokesman, told reporters Friday, “We’ve spent over a hundred hours in the lower house trying to explain the meaning and need for the bills in an easy-to-understand manner. We hope in the future to gain the understanding of the people.”

Yukio Edano, the spokesman for the main opposition, the Democratic Party of Japan, spoke to reporters after a failed attempt to pass a no-confidence motion against the Abe Cabinet.

“We will appeal to the general public to create a new parliament that does not allow for the destruction of constitutionalism or these security laws,” Edano said.

Among those at the protests that dragged into the early hours was Yuri Miyamoto, a 32-year-old social worker.

“I’m antiwar. I worry about the Self-Defense Forces,” she said, referring to Japan’s unified military. “Many soldiers join the organization to defend Japan and help during disasters—not to kill people in foreign wars that don’t concern Japan. Many are said to be quitting. I fear that some sort of draft will be enforced to replace them.”

Many legal scholars and a former Japanese Supreme Court chief justice opposed the bills as being unconstitutional.

The legislation will substantially expand the powers of Japan’s military, which has been limited to self-defense activities under the constitution enacted in 1947 under U.S. supervision.

The legislation does not annul Article 9 of the constitution, which declares that “the Japanese people forever renounce war as a sovereign right of the nation and the threat or use of force as a means of settling international disputes.”

Yet the new laws institutionalize “collective self-defense,” allowing Japan to come to the aid of allies during war, even if Japan is not attacked. Abe’s government has stated that by expanding the ability of the Self-Defense Forces, it will make Japan’s alliance with the U.S. more robust and evenhanded.

Retired U.S. Marine Col. Grant Newsham, a senior research fellow at the Japan Forum for Strategic Studies in Tokyo, said the passing of the bills was both positive and necessary.

“The bills draw Japan and the U.S. closer together. Solid military ties … lead to stronger political ties between the two countries. Japan has no good options for defending itself and its interests that do not involve the United States and U.S. forces,” he said. “Abe has wisely recognized this, and is doing his best to draw the U.S. closer.”

Even so, said Newsham, “Abe has done a very poor job of explaining to the Japanese public why these laws are needed.”

In the weeks leading up to the vote, protesters repeatedly thronged the parliament, known as the Diet, staging the largest demonstration since the anti-nuclear protests after the Fukushima plant meltdown in 2011. The protests grew to as many as 120,000 people.

Opposition lawmakers sought to make a last-minute stand against the bills.

On Wednesday evening, a special committee in the upper house, headed by Yoshitada Konoike of Abe’s Liberal Democratic Party, was supposed to approve the bill and send it to the full chamber for a vote.

But Konoike was unable to enter the meeting room after Democratic Party of Japan lawmakers and smaller opposition legislators gathered in the corridor and created a human barricade.

Female members of the DPJ wearing pink headbands blocked another meeting room, and when male guards tried to move them, they shouted, “Sexual harassment!”

On Thursday [17 Sep], in a last-ditch effort to delay the vote in the committee, the DPJ filed a no-confidence motion against Konoike, which was rejected. As soon as the chairman returned to his seat, the opposition surrounded him, loudly protesting, but he put the bills to a vote without a final question-and-answer session.

The bills’ passage is an important victory for Abe and the ruling party, though he has expended significant political capital to push the measures through.

Koichi Nakano, a professor of Japanese politics at Sophia University in Tokyo, noted that though the legislation may appear to be in the United States’ interests, there could be a backlash. The new laws, he said, “carry no democratic legitimacy in the eyes of a large majority of the Japanese. Civil protest groups are determined to make the laws unusable, through a series of lawsuits and campaigns to defeat the reelection bids of governing party politicians.”

If the government tries to deploy Japanese troops to exercise the right of collective self-defense, he predicted that huge street protests will return.

“Abe made the mistake of committing himself to this move with a ‘promise’ to the U.S. politicians before he went through the due constitutional and democratic process in Japan,” said Nakano. “Now, there is also a real chance that anti-American sentiment that has long been very muted in Japan in recent decades will also return.”

Adelstein is a special correspondent.