Regime Change Refugees: On the Shores of Europe

4 Sep 2015 – Terrible pictures arrive onto social media of refugees from Syria and elsewhere, washed up on the shores of Europe. One in particular is particularly ghastly – the body of young Aylan Kurdi. He was only three. He was from the Syrian town of Kobane, now made famous as the frontline of the battle between ISIS and the Kurdish militias (largely the YPG and PKK). Aylan Kurdi’s body lay in a fetal position. Few dry eyes could turn away from that photograph.

The Jordanian cartoonist Rafat Alkhateeb drew an image of Aylan Kurdi. The infant’s body lies on the other side of a barbed wire fence that separates him from the continents of the world. 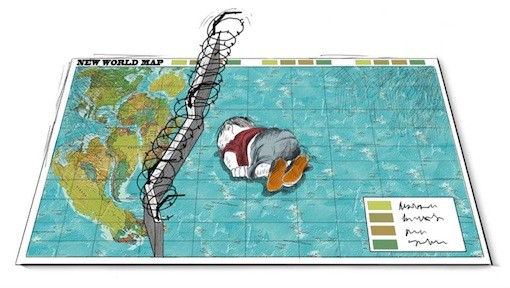 Children like Aylan Kurdi are disposable in the world’s imagination. Untold thousands of Syrian children have died in this conflict. Tens of thousands of children die in conflicts around the world. The United Nations estimates that half of all deaths in conflict zones are of children. In 1995, UNICEF reported that two million children had died in conflicts over the previous decade. The rate has not decreased. The statistic harms the consciousness. But it is the picture of Aylan Kurdi that has unsettled our ethics – does the world really care about the damage done to children as a result of war and diabolical trade policies? The evidence suggests that the world does not care at all. What care there is comes in the brief instance when we glance at a photograph such as that of the dead body of Aylan Kurdi. He breaks our heart. But he will do little to change our politics.

The West believes that it is acceptable for it to intervene to influence the political economy of the Third World – to force IMF-driven “reforms” on these states. Capital is allowed be borderless. That freedom does not apply to labour – to people. Migration is forbidden. It is hateful. Racist ideas allow fortresses to be built against the natural movement of people. Barbed wire fences and concentration camp towers outline the US-Mexico border, just as such fences and the Mediterranean Moat block the passage into Europe. If Capital destroys the society here, its people cannot be allowed to migrate there.

The West believes that it is acceptable for it to overthrow governments and bomb its enemies in the lands of the Third World. It sees this as the limit of its humanitarianism. It calls this humanitarian interventionism or, in the language of the UN, “responsibility to protect” (R2P). When it breaks states, as it did in Libya, the West takes no responsibility for the broken lives of the people in those zones. Bombs are borderless. But war refugees must stand in queues and be held in concentration camps. They are not allowed freedom of movement.

Hypocrisy is central to elite Western ethics. It uses words like “freedom” and “equality” but mostly means its opposite. The freedom of human beings and equality between human beings is not relevant. More important is the freedom of Money. It is Money that cannot have its liberty impinged.

Both Europe and the United States want to build walls to prevent the free movement of people. The Statue of Liberty in New York harbor bears the words, “Give me your tired, your poor; your huddled masses yearning to breathe free.” This is Emma Lazarus’ poem from 1883. No longer do these words make sense. There is no exhortation to send the tired, the poor, the huddled masses to safety. There is mostly the State-led jingoism that sets up barriers and threatens deportations. The more appropriate song is by Woody Guthrie, Deportee, from 1961: “They chase us like outlaws, like rustlers, like thieves. We died in your hills, we died in your deserts, we died in your valleys and died on your plains.” He would have added, we died on your shores.

Such toxic lineages are not alone. There is also the people’s ethics – banners in Germany unfurled at football games to welcome refugees, convoys of ordinary British nations to Calais (France) to help feed and clothe the refugees, demonstrations of radical internationalists in Eastern Europe against the neo-fascists and the racists. There are also, in the United States, the Dream Defenders and United We Dream who fight for undocumented residents, who formed part of the massive pro-immigrant rallies that have now adopted May Day as their day. These indications of the good side of history are often ignored by the press, which has a tendency to hype up the bad side to boost ratings. Such gestures of solidarity tell us what is possible in the West.

Aylan Kurdi is dead. Many other Aylan Kurdis remain. Our outrage at this callous death should drive us deeper into a politics that calls for a drawdown of the violence in Syria and for a serious peace process in Libya, that forces us to be resolute in our fight against IMF and NATO destruction of societies and states. In essence, this is a call for a resolute anti-imperialism. Imperialism, after all, is extra-economic force such as war or the unequal drafting of trade rules to allow a small capitalist minority to sequester the largest share of globally produced social wealth. Refugees such as Aylan Kurdis are “climate change refugees,” “regime change refugees” and “IMF refugees.”

The West’s managers will only talk about tragedies and security. For them people are migrants and deportees, those whose mobility must be constrained. This is a limited imagination. They will not want to talk about the causes of the problem – the wars and economic policies that throw millions of people into the status of refugee. That is our job. In the name of Aylan Kurdi.

This essay appears in BirGün, Ganashakti and CounterPunch.

Vijay Prashad, director of International Studies at Trinity College, is the editor of “Letters to Palestine” (Verso). He lives in Northampton.