23 Oct 2015 – Representatives from two major defense contractors whose advanced weaponry is being used in the Saudi Arabia-led bombing campaign that has killed scores of civilians in Yemen were quick to defend the human rights record of the Persian Gulf kingdom in a panel discussion held last week in Washington, D.C. 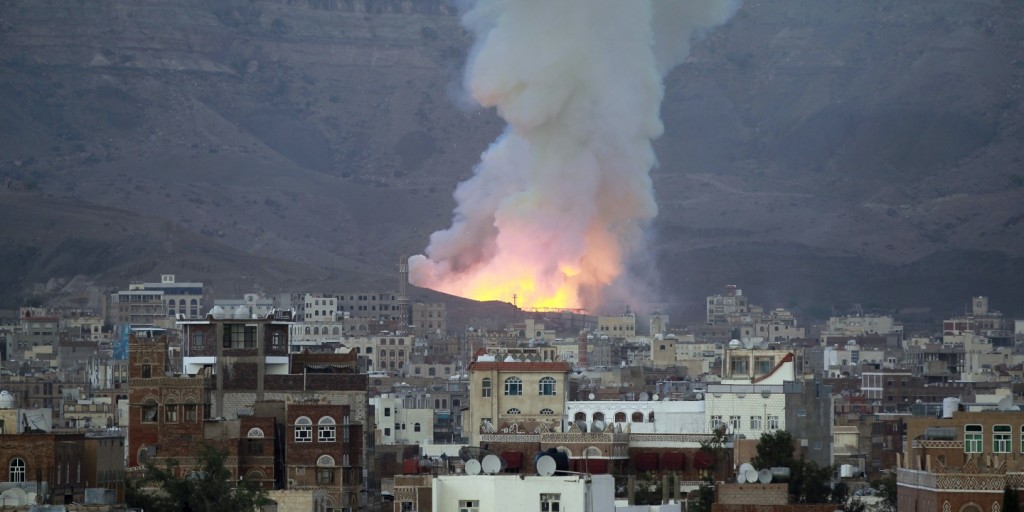 Smoke billows following an air strike by Saudi-led coalition on May 11, 2015, in the capital Sanaa.
Mohammed Huwai, AFP/Getty Images

Ronald L. Perrilloux Jr., an executive with Lockheed Martin, complained of an atmosphere of “hostile media reports” shaping the views of Congress, most of which, he said, are “patently false.”

“Another significant irritant,” Perrilloux said, “is the application of human rights laws” toward U.S. allies in the Middle East, including Saudi Arabia, Kuwait, and the United Arab Emirates. Perrilloux argued that these countries, despite being “better partners to us than some of our NATO allies,” were being unfairly judged compared to Chinese human rights abuses.

Democrats on Capitol Hill recently blocked arms transfers to Saudi Arabia over concerns regarding the rising civilian death toll caused by the campaign.

Jeffrey Kohler, a retired Air Force lieutenant general who left the military and now work as a vice president at Boeing, declared, “We ought be encouraging that type of cooperation and facilitating and helping them with the gaps instead of just throwing stones.”

Perrilloux added that “the biggest thing we can do to help them finish the job is to provide them with the benefit of our experiences, with training of their forces, and probably replenishment of their forces.”

Listen to the discussion below.

The increased attention to the human rights record of Saudi Arabia is due to several factors. The absolute monarchy has dramatically ramped up executions as well as repressive police actions against minority groups, including Shiite Saudis. Many of the executions are in connection with trivial offenses, such as adultery and acts considered as “sorcery.”

Newly installed U.K. Labor Party leader Jeremy Corbyn made headlines in recent weeks by demanding that Prime Minister David Cameron intervene to stop the planned execution and crucifixion of Ali Mohammed al-Nimr, a Shiite who was arrested as a teenager for protesting the Saudi government.

Other aerial bombs have struck apartment buildings, markets, refugee camps, and at least two wedding parties. A single mission from Amnesty International documented Saudi-led coalition airstrikes that killed around 100 people, over half of them children.

Perrilloux is Lockheed Martin’s director of international business for the Middle East and Africa region, and a former U.S. air attaché and acting defense attaché to Saudi Arabia.

Kohler now serves as the vice president of international sales and marketing for defense, space and security at Boeing.

For both defense contracting giants, the Middle East is still a growing market. The Congressional Research Service notes that between October 2010 and October 2014, the U.S. signed off on more than $90 billion in weapons deals to the Saudi government.

Weapons transfers are actually a foundation for stability, the executives argued. “More often than not, it is the military relationship that will keep the relations and the bonds between countries very strong,” Kohler said. “When you sell somebody a big platform like an F-15, you build a 30-plus year relationship with that air force.”

The conference, organized by the National Council on U.S.-Arab Relations, was designed to promote the strength of the alliance between the U.S. and Saudi Arabia.