One Day after Warning Russia of Civilian Casualties, the U.S. Bombs a Hospital in Afghanistan

3 Oct 2015 – Yesterday afternoon, U.S. Ambassador to the United Nations Samantha Power marched to Twitter to proclaim: “We call on Russia to immediately cease attacks on Syrian opposition and civilians.” Along with that decree, she posted a statement from the U.S. and several of its closest authoritarian allies — including Saudi Arabia, Qatar and the U.K. — warning Russia that civilian casualties “will only fuel more extremism and radicalization.”

Early this morning, in the Afghan city of Kunduz, the U.S. dropped bombs on a hospital run by Doctors Without Borders (Médecins Sans Frontières (MSF)). The airstrike killed at least nine of the hospital’s medical staff, and seriously injured dozens of patients. “Among the dead was the Afghan head of the hospital, Abdul Sattar,” reported the New York Times.

Jason Cone, MSF’s executive director, said the medical charity “condemns in the strongest possible terms the horrific bombing of its hospital in Kunduz full of staff and patients.” He added that “all parties [to the] conflict, including in Kabul & Washington, were clearly informed of precise GPS Coordinates of MSF facilities in Kunduz,” and that the “precise location of MSF Kunduz hospital [was] communicated to all parties on multiple occasions over past months, including on 9/29.” Worst of all, from MSF itself:

For its part, the U.S. military in Afghanistan issued a statement acknowledging that it carried out airstrikes, claimed they were conducted “against individuals threatening the force,” and conceded that “the strike may have resulted in collateral damage to a nearby medical facility.” But the NYT reported: “From early on, the Taliban had respected the hospital’s request not to bring weapons inside, according to staff members, and the hospital had been a refuge in the shattered city of Kunduz. It was a place where the wounded from all sides were treated.” 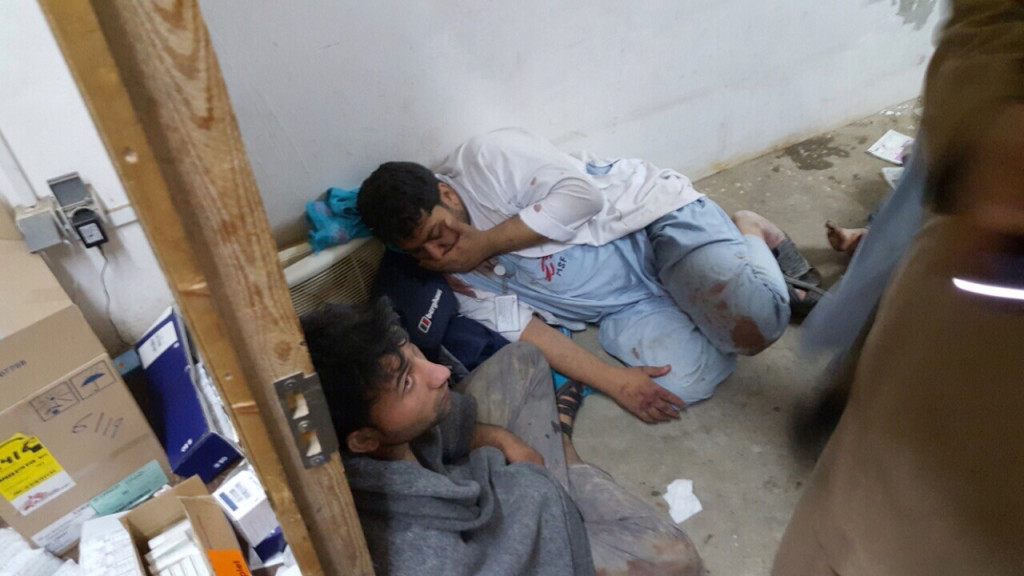 A handout provided by Medecins Sans Frontieres shows MSF staff in shock in one of the remaining parts of the hospital in Kunduz in the aftermath of the bombings, Kunduz, Afghanistan, October 3, 2015.

The medical organization noted that “our hospital in Kunduz was the only one of its kind in NorthEastern Afghanistan.” It referenced a now-poignant tweet it posted earlier in the week:

Since early Monday morning, our medical teams in Kunduz, #Afghanistan have treated 252 wounded, including 53 children pic.twitter.com/hjmhYMSdpS

Now, however, the Twitter accounts of various MSF branches are filled with horrific photographs of their staff traumatized and their hospital burning as a result of U.S. bombs:

Photos of aftermath of the bombing that left 3 staff dead & many ppl wounded. #Afghanistan http://t.co/pjecwxuPSs pic.twitter.com/OnSZXwc2x9

MSF’s full, frequently updated, hard-to-read account of all of this is here.

This strike on a hospital in Afghanistan comes days after the Saudi-led coalition bombed a wedding in Yemen that killed more than 130 people. After days of silence from the U.S. government — which has actively participated from the start in the heinous bombing of Yemen — Ambassador Power finally acknowledged the wedding massacre, but treated it like some natural disaster that has nothing to do with the U.S.: “Terrible news from Yemen of killing of innocent civilians & aid workers. Urgently need pol solution to crisis,” she tweeted.

Her accompanying statement claimed that “the United States has no role in the targeting decisions made by the Coalition in Yemen,” but yesterday, the Saudi Foreign Minister told CBS News that “We work with our allies including the United States on these targets.” There’s no dispute that the U.S. has lavished Saudi Arabia with all sorts of weapons and intelligence as it carries out its civilian-massacring attacks on Yemen.

This last week has been a particularly gruesome illustration of continuous U.S. conduct under the War on Terror banner, including under the Nobel Peace Prize-winning president who celebrates himself for “ending two wars” (in the same two countries where the U.S. continues to drop bombs). The formula by now is clear: bombing whatever countries it wants, justifying it all by reflexively labeling their targets as “terrorists,” and then dishonestly denying or casually dismissing the civilians they slaughter as “collateral damage.” If one were to construct a list of all the countries in the world based on their credibility to condemn Russia for using this exact rhetorical template in Syria, the U.S. would literally be last on that list.

UPDATE: U.S. officials went to Time magazine yesterday to announce that Russia will be creating more terrorists than they kill as a result of misguided airstrikes in Syria. “We believe if you inadvertently kill innocent men, women and children, then there’s a backlash from that,” said Lt. Gen. Bob Otto, the Air Force’s deputy chief of staff for intelligence, surveillance and reconnaissance. “We might kill three and create 10 terrorists. It really goes back to the question of are we killing more than were making?”

It’s impossible to fathom what the U.S. media would be saying and doing if Russia did something like this in Syria. By contrast, the reaction to this airstrike by their own government will be muted and filled with apologia, ironically quite similar to the widely vilified caricature of Jeb Bush’s comments about the Oregon shooting spree: “stuff happens.”

UPDATE II: Al Jazeera reports that the hospital bombed by the U.S. “is the only medical facility in the region that can deal with major injuries.” Nonetheless, “officials of MSF … told Reuters that they ‘frantically phoned’ NATO and Washington DC, as bombs rained on the hospital for ‘nearly an hour.’”

Speaking to the nation just three days ago about the Oregon shooting spree, Barack Obama said: “This is a political choice that we make, to allow this to happen every few months.” That applies to a lot more than that incident.

UPDATE IV: Several reports suggest that this hospital has been viewed with hostility because it treats all injured human beings, regardless of which side they’re on. “The hospital treated the wounded from all sides of the conflict, a policy that has long irked the Afghan security forces,” reports the NYT. Al Jazeera notes that “a caretaker at the hospital, who was severely injured in the air strike, told Al Jazeera that [the] clinic’s medical staff did not favor any side of the conflict. ‘We are here to help and treat civilians,’ Abdul Manar said.” That same caretaker added: “Several women and children are also killed in the strike. I could hear them screaming for help inside the hospital while it was set ablaze by the bombing. We are terrified and speechless.”

UPDATE V: The U.N. human rights chief has denounced the U.S. airstrike as “tragic, inexcusable, and possibly even criminal.”

This is not the first time this has happened. In 2004, U.S. airstrikes in Falluja, Iraq, hit a hospital and “razed it to the ground.”