Striking Distance: The Violence We See, and Don’t See, Onstage

From the Greeks to ‘Disgraced,’ direct violence has been a theatrical staple. Structural violence, though harder to stage, is also the stuff of drama. 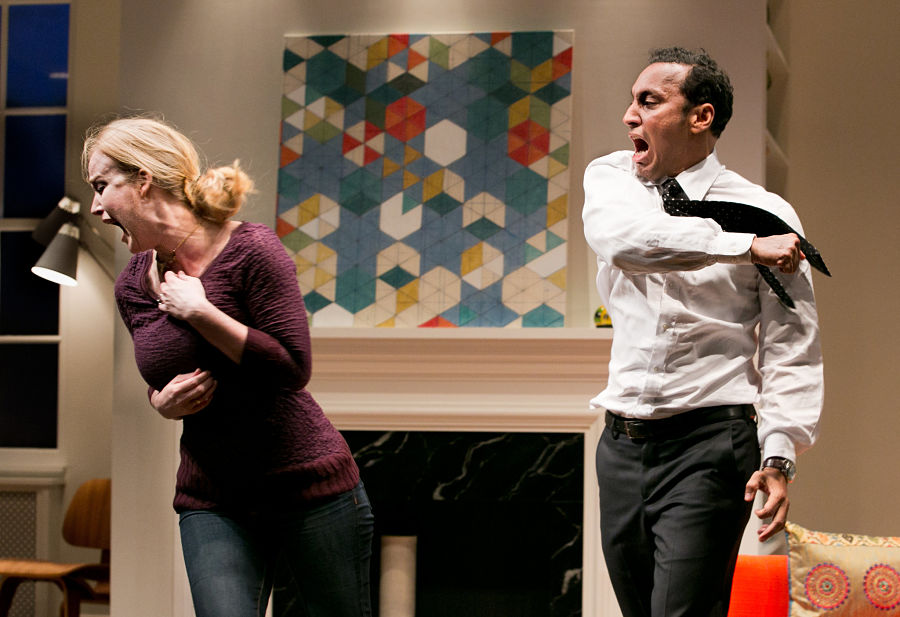 Heidi Armbruster and Aasif Mandvi in “Disgraced” at Lincoln Center in 2012. (Photo by Sara Krulwich for the New York Times)

During a disastrous dinner party near the end of Ayad Akhtar’s Disgraced, a Pakistani-American lawyer who was raised Muslim learns that a younger protégé, who is African American, is being promoted over him. More bad news follows: Partners in his law firm believe he is anti-Semitic; he is no longer being assigned important cases; and his wife, who is white, has slept with the Whitney Museum curator, who is Jewish, whom they have just entertained. This disturbing confluence marks neither his nadir nor the play’s emotional climax. That occurs seconds later when, as Akhtar’s stage direction reads: “Amir hits Emily in the face. A vicious blow. The first blow unleashes a torrent of rage, overtaking him. He hits her twice more. Maybe a third.”

Akhtar’s Pultizer-winning play, set to be the most-produced in the country in the coming season, is a bouillabaisse of contemporary issues boiling around one another: ethnic profiling and immigration; terrorism and Islamofascism; race and identity stereotyping of Jews, African Americans, and Muslims. But after much smart and engaging talk among Upper East Siders, emotion and alcohol gives way to direct violence. This explosive and provocative moment is a vivid example of a shift in the representation of domestic violence; it also provides an opportunity to identify other forms of violence that are indirect, impersonal, and at least as pernicious.

Violence long ago moved from the offstage convention of the Greeks when, for example, a messenger informs Oedipus and the audience that Jocasta has hung herself inside the palace. In King Lear, Cornwall blinds Gloucester before our eyes. Edward Bond’s Londoners stone a baby to death onstage in Saved. Unrestrained sexual and physical violence animates many of Sarah Kane’s plays. 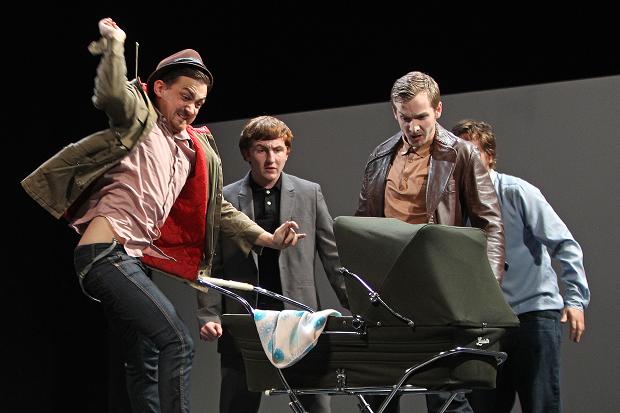 Disgraced is written in a realistic style that reflects the familiar dynamic of a man committing violence against a woman, but the play differs from what is common onstage in many ways. Amir is not a serial abuser. He does not appear to be a controlling husband bent on exercising power. In the opening image, he sits passively as Emily sketches his portrait. Later, they interpret a verse of the Koran on the treatment of wives very differently, with Emily’s perspective more positive than Amir’s: “The root verb can mean beat. But it can also mean leave. So it could be saying, if your wife doesn’t listen, leave her. Not beat her.”

But unlike some past depictions of domestic violence, Disgraced offers no excuse—not once, not even when, as Emily admits, “I had a part in what happened.” Theatre history is full of examples of women rising from the mat, figuratively, to spar another round with an abuser.

Contrast Amir and Emily with an older couple entertaining at home across a drunken evening: The abuse between George and Martha in Who’s Afraid of Virginia Woolf (1962) is longstanding and unites as much as divides them: In the first act George threatens physical harm when he aims a shotgun at Martha, pulls the trigger, and a Chinese parasol “blossoms” from the barrel. In the second act, he threatens to kill her and grabs her by the throat, which prompts Honey to scream, “MURDERER! MURDERER!” By the end of the third act of their long night’s journey, they remain a couple, still standing, if wobbly.

In Carousel (1945), Julie confides that Billy has hit her, which prompts Carrie to ask, “Whyn’t you leave him?” When Billy returns from the grave to visit his daughter, he slaps her hand. Later, Julie reassures her, “It is possible, dear—for someone to hit you—hit you hard—and not hurt at all.”

Lyrics in Fiorello (1960) were later revised, but in the original Marie sings, “I’m gonna marry the very next man/And if he likes me/Who cares how frequently he strikes me/I’ll fetch his slippers with my arm in a sling/Just for the privilege of wearing his ring.” LaGuardia proposes to her in the next scene, the musical’s last.

In Danny and the Deep Blue Sea (1984), Roberta slaps Danny, which prompts him to choke her. Soon after, they make love for the first time—and slap each other again. By the following morning and the play’s final scene, they are planning marriage and the future together.

Punch and Judy shows, once a staple of British boardwalks, are less popular today. Traditionally, Mr. Punch, as his name implies, uses a cudgel and his hand puppet fists to bludgeon: a dog, a cat, a horse, a beggar, his neighbor, a doctor, a black servant, a policeman, a hangman, the devil, and, of course, Judy, his wife. His misanthropy hardly sounds humorous even if his violence is “preposterous,” as James Twitchell calls it. A headline in Britain’s Daily Mail showed the sea change two summers ago: “Punch and Judy show interrupted when killjoy accused organisers of ‘glorifying child abuse.’”

Our standards have changed on a number of once supposedly humorous things: Is the bigotry of Archie Bunker funny, for instance, in the age of Black Lives Matter? How about his belittling of Edith? How about Jackie Gleason’s common threat to his wife Alice on The Honeymooners, “One of these days . . . POW!!! Right in the kisser!””

Jeffrey Goldstein defines violence as “action intended to harm.” For Allen Guttmann, violence is “the unsanctioned or illegitimate use of harmful or destructive physical force.” Both definitions focus on what peace scholars call direct violence. But people do not need to intend harm to cause it; and it need not be physical since violence is often masked, indirect, and systemic.

According to the United States Institute of Peace (USIP) in Washington—yes, we fund such an agency—“Structural violence refers to inequalities built into the social system.” The term is usually attributed to Norwegian scholar Johan Galtung, who also coined “cultural violence.” He calls it “any aspect of a culture that can be used to legitimize violence in its direct or structural form. Symbolic violence built into a culture does not kill or maim like direct violence or the violence built into the structure. However, it is used to legitimize either or both.” 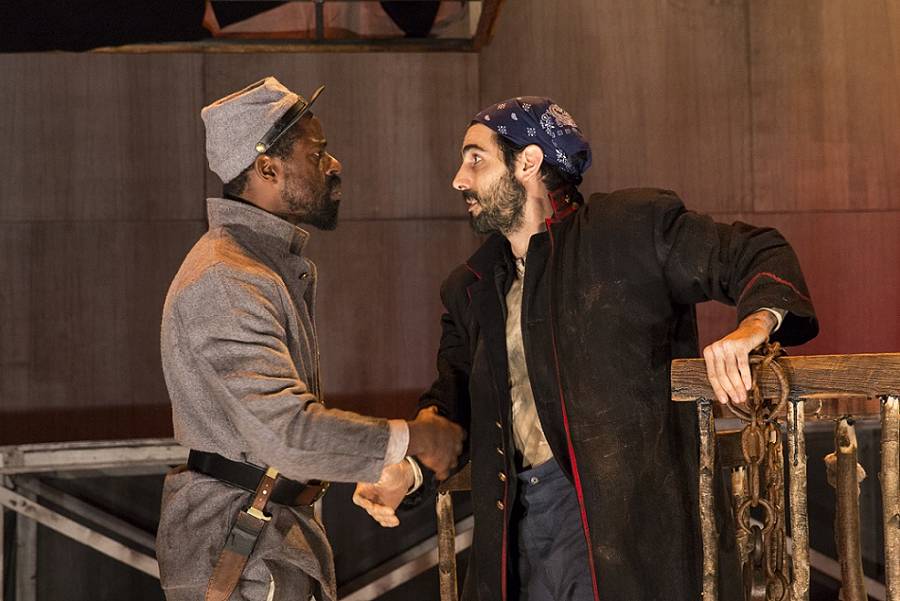 Sterling K. Brown and Louis Cancelmi in “Father Comes Home From the Wars (Parts 1, 2 & 3″ at the Public Theater. (Photo by Richard Termine)

These distinctions provide a useful lens. Whether onstage or off, direct violence is hard to miss: Agamemnon sacrifices Iphigenia; Amir attacks Emily. Forms of structural and cultural violence are much harder to perceive, especially when the audience lives amid them. Plays that dramatize these dynamics, whether overtly or covertly, make recognizing such violence unavoidable, as is clear in many prominent American plays of recent years.

Weeks into rehearsals of Father Comes Home from the Wars (Parts 1, 2, & 3), Suzan-Lori Parks changed the ending.  Instead of Hero killing Homer, Homer survives to join a chorus of runaway slaves seeking freedom. By eliminating a murder—the most obvious, direct, and personal form of violence—Parks shifts her audience’s focus from a black-on-black crime back to her predominant focus on slavery, one of history’s most egregious examples of structural violence. The Civil War itself is mostly distant in these first three parts. Parks has not written a single battle scene, onstage or off; no swordfight, no fisticuffs. Yet, the structural violence of slavery suffuses every scene.

Direct violence was the catalyst for both Fires in the Mirror (1992) and The Laramie Project (2000): the death of Gavin Cato in a traffic accident, the Crown Heights riots that led to the stabbing of Yankel Rosenblum, the murder of Matthew Shepard. But these instances of violence were pretexts for Anna Deavere Smith and Moisés Kaufman and his Tectonic Theater Project to widen the lens and dramatize “inequalities built into the social system,” as USIP defines structural violence.

Angels in America (1991) dramatizes HIV’s attack both on Prior’s body and America’s body politic, including Roy Cohn’s attempts to suborn justice. Structural and cultural violence towards gays and people with HIV may have diminished since Angels premiered as attitudes have changed (Tony Kushner’s marriage to Mark Harris in 1993, 20 years before the Supreme Court’s decision on gay marriage, was the first same-sex union covered in the Vows section of the New York Times). Unsurprisingly, changing attitudes is precisely what Woodehouse prescribes for curtailing cultural violence.

In his 1977 essay “On Violence,” Edward Bond writes: “The causes of human violence can be easily summed up. It occurs in situations of injustice. It is caused not only by physical threats, but even more significantly by threats to human dignity. . . .Whenever there is serious and constant violence, that is a sign of the presence of some major social injustice.” The playwrights cited above appear to agree with Bond on the root of violence as reflected in the structural and cultural violence evident within these plays. Gays, women, or people of color wrote them all.

“Threats to human dignity,” of course, have been reflected onstage long before Galtung’s coinages: The Oresteia ends with a system of justice replacing the endless cycle of violence perpetuated by honor killings. Two thousand years later, Shaw’s Mrs. Warren’s Profession uses sexual slavery as a locus for his Fabian critique of capitalism.

The purpose of playing, as Hamlet instructs the players, “was and is, to hold, as ’twere, the mirror up to nature.” Only four bodies litter the stage of Denmark’s rotting state as the curtain falls on Elsinore, but far more suffer from structural and cultural violence that is easily overlooked when it is covert and indirect. As Bond writes, “Like most people, I am a pessimist by experience but an optimist by nature, and I have no doubt that I shall go on being true to my nature.” In relation to violence, we can align the two: Violence in all its forms—direct, structural, and cultural—is committed by people and by institutions that act on our behalf. And the people and institutions that make violence can also unmake it.

Russell Vandenbroucke is a professor of theatre arts, and director of the Peace, Justice & Transformation Program, at the University of Louisville. He previously served as artistic director of Northlight Theatre in Skokie, Ill.