‘Dark Matter and the Dinosaurs,’ by Lisa Randall

Dark Matter and the Dinosaurs-The Astounding Interconnectedness of the Universe, by Lisa Randall, 412 pp., Ecco/HarperCollins Publishers. 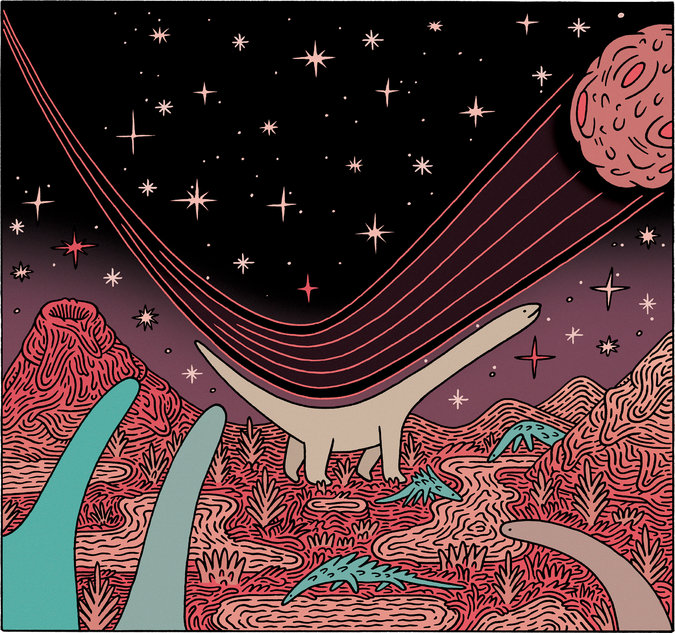 24 Nov 2015 – A good theory is an act of the informed imagination — it reaches toward the unknown while grounded in the firmest foundations of the known. In “Dark Matter and the Dinosaurs,” the Harvard cosmologist Lisa Randall proposes that a thin disk of dark matter in the plane of the Milky Way triggered a minor perturbation in deep space that caused the major earthly catastrophe that decimated the dinosaurs. It’s an original theory that builds on a century of groundbreaking discoveries to tell the story of how the universe as we know it came to exist, how dark matter illuminates its beguiling unknowns and how the physics of elementary particles, the physics of space, and the biology of life intertwine in ways both bewildering and profound.

If correct, Randall’s theory would require us to radically reappraise some of our most fundamental assumptions about the universe and our own existence. Sixty-­six million years ago, according to her dark-matter disk model, a tiny twitch caused by an invisible force in the far reaches of the cosmos hurled a comet three times the width of Manhattan toward Earth at least 700 times the speed of a car on a freeway. The collision produced the most powerful earthquake of all time and released energy a billion times that of an atomic bomb, heating the atmosphere into an incandescent furnace that killed three-quarters of Earthlings. No creature heavier than 55 pounds, or about the size of a Dalmatian, survived. The death of the dinosaurs made possible the subsequent rise of mammalian dominance, without which you and I would not have evolved to ponder the perplexities of the cosmos.

A necessary primer: Dark matter is the invisible cosmic stuff that, like ordinary matter — which makes up the stars and the stardust, you and me and everything we know — interacts with gravity but, unlike ordinary matter, doesn’t interact with light. Although scientists know that dark matter exists and accounts for a staggering 85 percent of the universe — billions of dark-­matter particles are passing through you this very second — they don’t yet know what it’s made of. For Randall the possibilities within that mystery are among the most thrilling frontiers of human ­knowledge.

Ordinary matter contains an entire ecosystem of particles — among them various quarks and neutrinos, the electron, and the newly discovered Higgs boson. So far, scientists have assumed that dark matter comprises only one type of particle. Randall, however, posits that dark matter might also comprise a variety of building blocks that interact through different forces. No prior theory has considered the simple yet profound possibility that while most dark matter doesn’t interact with ordinary matter, a portion of it might. Because dark matter carries five times the energy of ordinary matter, that tiny fraction could have enormous ­consequences.

Randall calls the force driving that fraction “dark light” — an appropriately paradoxical term confuting the haughty human assumption that the world we see is all there is. Her hypothesis that dark matter might interact with itself through its own unique form of invisible light calls to mind the poetic title of a 2003 paper by the physicist Brian Josephson about Einstein’s famous conversation with the Indian philosopher Rabindranath Tagore: “We Think That We Think Clearly, but That’s Only Because We Don’t Think Clearly.”

As stimulating as the substance of the book is, however, Randall doesn’t quite join the ranks of such masterly science-­storytellers as Stephen Jay Gould, Diane Ackerman, Alan Lightman or James Gleick. Giants like the late Oliver Sacks — working scientists who are also enchanting writers — come about once or twice a century, if we’re lucky. Randall is first and foremost a working scientist — but while she isn’t a natural storyteller of Sacks’s caliber, she is an excellent explainer, and her affection for her subject matter is infectious.

“Anyone who writes down to children is simply wasting his time,” E.B. White told The Paris Review in 1969. “You have to write up, not down.” What is true of children’s books turns out to be true of science books. While you need not be a physicist to metabolize the narrative, you are certainly called upon to do your own chewing — a rare opportunity in a culture where we are taken for so intellectually inept that our own conclusions are fed to us in listicles of bite-size buzz.

To be sure, Randall does have her lyrical moments — it’s hard to imagine that someone this genuinely enamored with the cosmos wouldn’t, much less a scientist who alludes to Blake in explaining cosmological inflation and weaves a description of a Renaissance fresco into the history of comets. Above all, she takes care to reveal the inherent poetry of science: The dinosaurs, who walked the earth for much longer than we have, perished, but from them evolved the birds that animate our skies; meteorites, for all their deadly capacity, once deposited the very amino acids that became the seeds of earthly life. “Extinctions,” Randall writes, “destroy life, but they also reset the conditions for life’s evolution.” The universe is strewn with dualities, which Randall insightfully exposes.

Therein lies the book’s greatest reward — the gift of perspective. The existence of parallel truths is what gives our world its tremendous richness, and the grand scheme of things is far grander than our minds habitually imagine. “The future enters into us in this way in order to transform itself in us long before it happens,” Rilke wrote. Although it took the deadly comet an immeasurably long time to reach its earthly victims, the dinosaurs’ destiny — and, in consequence, our own — was sealed in the cosmic blink when dark matter jolted that icy body out of orbit. It’s a sobering revelation of the gestational period of consequences. As Randall peers into the universe’s 13.8-­billion-year history, she notes that in her lifetime alone, human population has more than doubled, straining Earth’s resources and undermining cosmic work billions of years in the making. Although her periodicity model projects that a major meteoroid isn’t expected to hit us for another 32 million years or so, our civilization’s impact on the planet is like that of a slow-moving comet headed for doom — but unlike the one that killed the dinosaurs, Randall reminds us, we still have a chance to avert its course.

Almost more interesting than the theory itself is Randall’s tour of the process of scientific endeavor, in which scientists traverse the abyss between the known and the unknown, suspended by intuition, adventurousness, a large dose of stubbornness and a measure of luck. Her account of how scientists proved that a meteoroid killed the dinosaurs — a hypothesis that was first considered preposterous but that later precipitated a worldwide detective story 30 years in the making — is one of the most thrilling tales in the history of science. Only time will tell whether Randall’s own model ends up as the kind of work that merits a Nobel Prize or as one of those trailblazing wrongs that steer future scientists toward the truth.

Randall’s work, which she approaches with equal parts passion and precision, is perhaps best described as creative computational cosmology. Although she is one of the world’s most prominent working scientists, her theory is essentially a thought experiment in the tradition of philosophy, bridging metaphysics with the most strenuous experiment and observation of science. What emerges is an imaginative and ambitious model of how we ended up where we are now. Science, after all, isn’t merely about advancing information — it’s about advancing understanding. Its task is to disentangle the opinions and the claims from the facts in the service of truth. But beyond the “what” of truth, successful science writing tells a complete story of the “how” — the methodical marvel building up to the “why” — and Randall does just that.

A version of this review appears in print on November 29, 2015, on page BR14 of the Sunday Book Review with the headline: Force of Impact.