Like the Germans, Israeli Jews Don’t Want to Know about Persecuted People

Not all Germans turned a blind eye to Kristallnacht, November 1938. These ones in Magdeburg seem to be enjoying it.

Germany and the Jews, Israel and the Palestinians. One Must Compare

We live in a society that cultivates the feeling, from kindergarten to old age, that every stranger is an enemy.

November 9 marked the 77th anniversary of Kristallnacht – the Night of Broken Glass. This was the radiant name the Nazis gave their pogrom against Germany’s Jews on the night of November 9, 1938. The rioters carried out the destruction, abuse and killing in the heart of cities and towns, in streets and homes, in full view of ordinary people.

Many Germans were appalled by the scale of the madness, cruelty and barbarism, but they didn’t lift a finger. Apart from a few who hid Jewish neighbours in their homes, or had the courage to help the wounded, most saw what was happening, heard the cries and turned away. They were frightened. They shut themselves up at home. They closed their windows.

A German woman, Erna Stanger, testified that she looked out her window and saw three cars standing outside the apartment of her Jewish neighbour, one Mr. Zeligman. “A man walked up and down the street and ordered people to close their windows,” she said. “I moved away from the window, shut it, and after that I couldn’t see anything. But I heard shouting, apparently from Zeligman.”

This testimony was one of many collected by Manfred Franke, a German who was just 8 at the time. As an adult, based on his memories and investigations, Franke reconstructed the events of that night in his hometown. He presented his results in a book “Mordverläufe,” later dramatized as “Cases of Murder – November 9, 1938: A Protocol of Fear, Brutality and Death.”

That small town remains a town of ordinary, generally fair-minded people. That too is documented in the book. The day after the pogrom, for example, Manfred’s parents forbade him to pick up marbles from the floor of a destroyed shop on their street. “Don’t take anything,” his mother told him. “We’ll get you other ones. These belong to the Jew.” 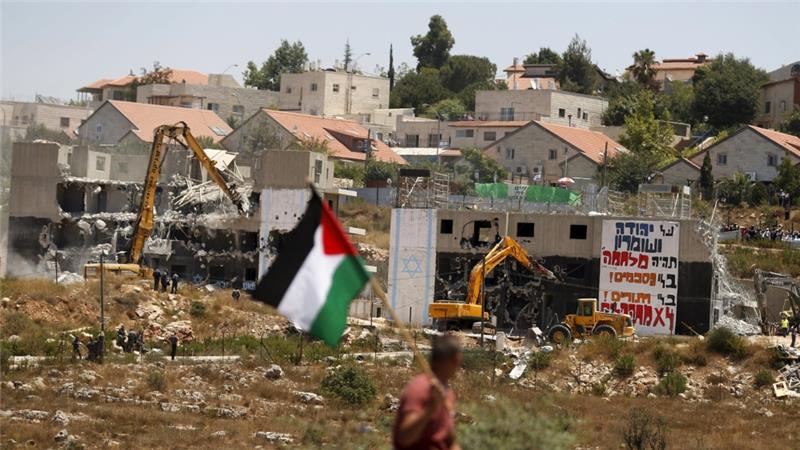 This Palestinian home is being demolished in Area C which is under full Israeli control. Knocking down a house created a lot of noise and dust and a heap of rubble. If you are anywhere near it is impossible not to hear, see, smell, feel the fall. More than 14,000 demolition orders have been issued against Palestinian-owned structures in Area C since 1988 the UN says. Al Jazeera, Sept. 2015

The majority says nothing

“Most Germans apparently didn’t support it, but they said nothing. When two churches and dozens of mosques are set on fire in Israel, and hundreds of Beitar fans shout ‘death to the Arabs’ at every soccer match, when a family is burned to death, the majority still keep silent …. Kristallnacht didn’t happen out of the blue. It was a consequence of what had gone on before,” she said.

“We see a similar development in Israel in recent years. Statements that justify violence against Palestinians, and the majority says nothing. And gradually, one step at a time, the public comes to accept what it hears day after day.”

The news website Ynet reported Zoabi’s speech under the headline “The speech of incitement.”

That night I received a phone call from the television programme “Talk of the Day.” They told me Zoabi’s speech would be an item for discussion on the show the next morning, and I would be interviewed at the beginning to express my views. In the four minutes I was awarded to “express my views,” I was asked if I agreed with Zoabi’s Holocaust comparison.

I said the comparison wasn’t to the Holocaust, and Zoabi wasn’t the issue. I said people standing by silently while fellow citizens suffered was an appropriate topic for discussion.

I tried to explain why, but when my four minutes were up, the floor was given to the panel members, who immediately targeted Zoabi. All she looks for are provocations, that woman from the Marmara protest ship! This time she’s crossed a red line! Why do they even give her a stage for such slanderous remarks?! That was just some of it.

I realized I had failed to explain anything. Four minutes weren’t even enough to explain a simple historical fact: Kristallnacht took place in the midst of the German civilian population, more than two years before the start of the mass murder of Europe’s Jews in extermination camps outside the population centres.

And it goes without saying that I didn’t have time to describe the social and political processes in the years leading up to that pogrom, to which Zoabi was undoubtedly referring when she said Kristallnacht didn’t happen out of the blue. She was right.

In those years, communist, liberal and democratic institutions and newspapers were shut down, and tens of thousands of opponents of the Nazi regime, not necessarily Jews, were arrested, imprisoned and tortured.

There was opposition to the Nazis in Germany at the time – and we should remember and learn from the fact that the Nazis came to power after the democratic November 1932 election in a democratic country. But once in power they put down the opposition mercilessly. Opponents of the regime, for example, were sent to Dachau, the first concentration camp, which was built less than two months after the Nazi-led government was formed.

Just a few days before my four-minute interview, I visited the memorial at Dachau. It documents the fate of the political prisoners, and I hoped for an opportunity to describe their courage and the price they paid for it. But go speak four minutes about the dissidents and others who had forsaken their ideals. 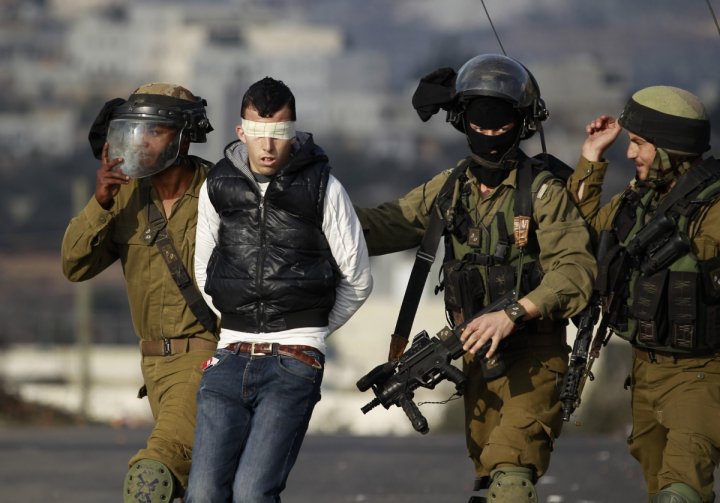 Does anyone ask why a boy is being led away in daylight, handcuffed and blindfolded, by a group of soldiers? He was taking part in a protest against the Jewish settlement of Ofra, in the West Bank village of Silwad, near Ramallah. Photo by Reuters

Go describe the photographs etched in your memory of “innocent” people who walked the streets of German cities past signs that proclaimed “Don’t buy from Jews!” Try telling anyone that those photos swim back into view when you see slogans in your own city, Jerusalem, like “Jewish workmanship,” “Don’t buy from Arabs” or “Death to the Arabs.”

Try saying that there is no real civil resistance to statements and actions that keep getting more and more extreme, even though many people feel the pain, and that no objector in Israel is endangered by the kind of risks that threatened political dissidents in Germany.

And especially, go try saying deep things about what you can compare and what you can’t compare. Only then can you express your painful and disturbing opinion that the silence in Israeli society about what has been done for decades to the Arab population in our midst and in our neighborhood, on both sides of the Green Line, can and should be compared to the silence of the silent majority in Germany between 1933 and 1938.

We are overdue in remembering the sentence engraved on a sign at the entrance to Yad Vashem’s permanent exhibit: “A country is not only what it does but also what it tolerates.”

Those words were written by Kurt Tucholsky, the German-Jewish satirical poet and publicist. Most visitors who pass the sign on their way to the pictures of horror and death in the ghettos and camps don’t know that the writer left Germany in 1929, was stripped of his citizenship in 1933 and took his life at the end of 1935.

That is, his words could only have been spoken in the early years of the Nazi regime, when Germany’s laws and actions were still a long way away from the imprisonment of Jews in ghettoes and their transportation to death camps. Kurt Tucholsky was a leftist and dyed-in-the-wool pacifist. If he were living in Israel today, he almost certainly would want to apply that sentence here. He’d want it to be the lesson learned from the National-Socialist chapter of modern history in general, and of German and Jewish history in particular.

Try saying all this in four minutes. Then go one step further. Quote Primo Levi, an Auschwitz survivor:

“Many people — many nations — can find themselves holding, more or less wittingly, that ‘every stranger is an enemy.’”

As Levi put it,

For the most part this conviction lies deep down like some latent infection; it betrays itself only in random, disconnected acts, and does not lie at the base of a system of reason. But when this does come about, when the unspoken dogma becomes the major premise in a syllogism, then, at the end of the chain, there is the Lager. Here is the product of a conception of the world carried rigorously to its logical conclusion; so long as the conception subsists, the conclusion remains to threaten us. The story of the death camps should be understood by everyone as a sinister alarm-signal.

“Everyone,” he wrote. And who of us can be included among them, we who grew up and live in a society that cultivates the feeling, from kindergarten to old age, that every stranger is an enemy? And the greatest enemies are the Arabs who live alongside us.

If they had let me say all this, I would have said yes, there is room for comparison. Some people, rightly, protest that ours is a political-national conflict that did not exist in Germany.

But to them it must be said that no conflict has ever justified one nation’s permanent military and civilian control over millions of people of another nation, the denial of their human and civil rights, the expropriation of their land, the demolition of their houses, the trying of hundreds of thousands of them in military courts and the incarceration of them in detention camps and prisons.

This control, which was a covert ideology for many years, is now the product of an overt, official, nationalist and racist ideology. Yes, there is a basis of comparison between a society that allows all these things to happen, by deed or indifference, and a society that could allow the pogrom 77 years ago to happen. Though we may hope that no concentration camps await in the end.