Ahead of crucial election, musicians rail against government-sanctioned repression of persecuted Rohingya minority. 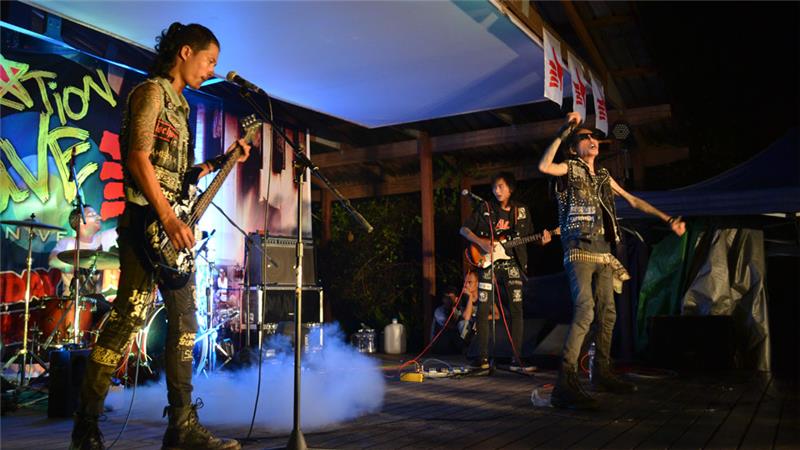 3 Nov 2015 – A riotous crowd gathered before a throbbing stage as loud music blared from speakers and sweaty musicians jammed to an eager beat. Young people in black studded leather jackets and spiky multicoloured hair hurled themselves into the air.

“This one is for Wirathu – look at what you’ve done,” shouted the lead singer, referring to one of Myanmar’s most prominent Buddhist nationalists, before launching into a song condemning religious violence.

The band Side Effect is one of Myanmar’s most popular punk rock bands and among a growing number of musicians rallying to combat hate speech. The performance came as religious tensions escalate in the former military dictatorship leading up to a landmark general election on Sunday.

In late August, Myanmar’s President Thein Sein approved the last of a package of controversial race protection laws widely viewed as an attack on the country’s Muslim minority.

The new laws impose strict controls on Buddhist women hoping to marry outside their faith, while criminalising polygamy and adultery, and prohibiting women from having more than one child every three years.

The legislation was sponsored by a group of hardline monks, known locally as the Ma Ba Tha, who claim that Muslims are trying to take over the country.

“They’re a group of Buddhist Nazi skinheads,” said Darko C, the lead singer and guitarist. “It is disgraceful for our country.”

The Ma Ba Tha movement emerged in the wake of  ethno-religious clashes between Buddhists and Rohingya Muslims in western Myanmar in 2012, shortly after the country embarked on a democratic reform process.

Since then, the organisation has expanded at an alarming rate with offices sprouting up across the country, and a dedicated network of professional lawyers and spin doctors added to its team. The group’s nominal figurehead, Wirathu, has earned global infamy for likening Muslims to “mad dogs” who breed “like African carp”.

Most politicians and activists have shied away from challenging the Ma Ba Tha for fear of repercussions.

Earlier this year, an official in Aung San Suu Kyi’s National League for Democracy (NLD) was sentenced to two-and-a-half years in jail with hard labour for “insulting religion”, after making a speech condemning the misuse of Buddhism by hardliners. He was promptly dismissed from the opposition party.

“It’s a sensitive issue when it comes to Buddhism,” said Darko. “Before if I said something against [the Ma Ba Tha], people including my friends, they might take it wrong.”

Darko wrote his first song about Buddhist nationalism shortly after religious violence gripped the central city of Meiktila in 2013.

He admitted a visit to strife-torn western Rakhine state the same year changed his perception of Myanmar’s Rohingya minority. Like many other Buddhists, he previously viewed Rohingya as illegal immigrants from Bangladesh.

He blamed Myanmar’s media for its inflammatory and biased coverage of the crisis, which has left up to one million Rohingyas confined to ghettoes and displacement camps near the Bangladeshi border.

Darko started posting regularly on social media to criticise the Ma Ba Tha and its supporters. Darko, whose wife is also Buddhist, joked that on a recent tour in India he considered converting to a shamanistic religion known as Donyi-Polo to provoke debate on interfaith marriages in Myanmar.

“I am sure there are many people who won’t speak a word about it but I think that what the Ma Ba Tha is doing is crazy,” he said. “Now with the election coming closer and closer, we need to speak louder and louder.”

Side Effect recently worked with an NGO called Turning Tables to write a song called “Wake Up Myanmar”, which is performed by youth across the country and calls for an end to military dictatorship and oppressive laws.

“I hope there will be no one knocking on my door in the middle of the night,” Darko said.

A clutch of other underground punk bands, known for their subversive lyrics and disdain for authority, has sharpened their pens to take aim at Buddhist hardliners.

One of the most vocal groups is Rebel Riot, a punk trio formed after Myanmar’s 2007 pro-democracy uprising known as the Saffron Revolution. Their lead guitarist and singer, Kyaw Kyaw, blamed the country’s military dictatorship for driving the education system into the ground and fuelling ignorance.

“Some fans of the Ma Ba Tha sent me messages of warning [saying]: ‘We know who you are and where you live,'” he explained. “[But] I don’t worry about what I did. I know that I say the truth.”

In March, he penned a new song called Military Slave Education in response to a violent government crackdown on student protesters.

For Skum, the lead singer of crust punk band Kultureshock, politics and music have always been entwined. During military rule, the Yangon-based musician evaded the censor board by playing gigs in abandoned warehouses and secretly recording angry lyrics about the government.

“Punk rock is about freedom and speaking up against injustice and the hypocrisies of the establishment,” said the scrawny 35-year-old, decked out in leather boots and skinny jeans, while sucking on a cigarette.

“Those … [race protection] laws they are making are totally meaningless – a total disregard for women’s rights. It’s just a first step; they want to control people’s lives. They want to turn this country into a police state like it was before,” said Skum.

Skum knows all too well the price of crossing the Myanmar authorities.

Less than a year after forming his band in 2003, he was arrested and jailed for possession of marijuana. At the time he was a student at Yangon University of Foreign Languages, an institution known to the government for breeding troublesome pro-democracy activists.

“They were using the fact that I was doing drugs, so when they no longer wanted me on the street, they arrested me,” he said.

He spent three years in Myanmar’s notorious Insein prison and another three at a forced labour camp. His friend, who was arrested with him, died in prison.

Like many others, the musician suspects the government is exploiting anti-Muslim sentiment to discredit Nobel laureate Aung San Suu Kyi, whose party is expected to win a landslide victory on Sunday.

The Ma Ba Tha, which has openly backed the ruling Union Solidary and Development Party, regularly attempts to smear Suu Kyi as a “Muslim sympathiser”. The head of Myanmar’s armed forces, Min Aung Hlaing, recently urged all military voters to back a party that can protect the Buddhist faith.

“The ‘protection of race and religion’ is a powerful card in Burmese politics,” explained Paul Fuller, a lecturer in Buddhist Studies at the University of Cardiff, UK. “The Sangha [Buddhist religious authority] are still at the centre of Burmese customs and to take a stand for its preservation cannot be easily dismissed.”

Opposition leader Suu Kyi has also provoked anger for her silence on the plight of the stateless Rohingya minority, while her party recently admitted to scrubbing Muslim politicians from its candidate list in response to pressure from the Ma Ba Tha.

“If Daw Aung San Suu Kyi wouldn’t dare to talk about the Rohingya issue then why is she an icon for freedom and democracy?” asked Skum. “She is just like all the other politicians around the world.”

But with a few short days left to the Myanmar election and no politician willing to court controversy, it has been left to Myanmar’s gritty counterculture to denounce racism.

“Someone has to speak up against all this bullshit,” said Skum. “Right now we are nobody, but if we keep trying, keep fighting, hopefully there will be a difference in the future.”