To Derryn Hinch [in Australia]: Yes, Stand Up Against the Killing Fields in Syria – But Research Syria First 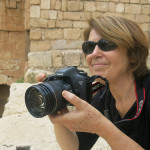 3 Nov 2015 – Few people in the west would be aware of the calls for genocide heard in corners of the Middle East and the support given ‘Takfiris‘.  Today, even prominent Al-Jazeera hosts can incite hatred towards more than 2 million Alawis in Syria, as seen in this program broadcast in May 2015.

The above video made by insurgents towards end of 2012 or beginning of 2013 shows Takfiris in a town in northern Syria. 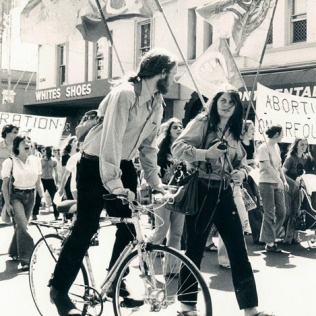 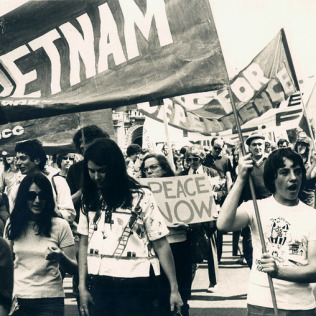 Above: The writer at demonstrations in Melbourne, early 1970s

A Syrian in Damascus takes sides: he expresses support for the Syrian government rather than ‘terrorists’.

On November 3 2015, The AGE, one of two leading local newspapers in Melbourne, published a comment piece by Derryn Hinch, “Bashar al-Assad: Australia must not help keep this murderer in charge”.  Derryn is a veteran broadcaster / commentator who is known to take strong stands on issues and has even gone to prison for his principles. He is a maverick, a rebel. However, his article written after his return from a recent trip to Cambodia places him broadly in mainstream Australia since most people have accepted the mantra from the mainstream media that “Assad is a brutal dictator and he has to go”. In the comment piece, Derryn compares President Assad to Pol Pot.  Below is an email I wrote to Derryn in response.

I hope you are prepared to take an elderly anti-war activist seriously as I would love to meet up with you to discuss Syria.  I sent you a couple of tweets today after reading your article in The AGE, so if you have read them, you will have some idea of my point of view.

In recent years, I have also likened the war in Syria to the Khmer Rouge killing fields in Cambodia, but my take on Syria is very different to yours. The Khmer Rouge had an ideology.  They believed it gave them the license to kill those who didn’t agree with them, and intellectuals were one of their main targets. Some believe that the works of Chairman Mao Zedong inspired Pol Pot, at least to some extent.  I taught in China towards the end of the Cultural Revolution.  A woman I was quite close to had been a leader of a Red Guard faction in the 1960s.  Apparently, she once killed a ‘a capitalist roader’ at a political meeting.  She used a pair of shears.  An ideology or doctrine can condone such barbaric behaviour towards individuals or groups placed outside its ‘laws’ .

I lived in Damascus for two years and taught students at the British Council there.  For me, classrooms in Syria were very similar to the ESL classrooms I am used to in Australia.  The students were a joy to teach.  They were sophisticated, well-informed and warm and welcoming.  There was no hateful ideology being espoused. Their text books came from the UK and some knew much more about Australian music than I did. However, there was a fear that Syria would be targeted by the US and its allies in the near future.

Syria had been presented as a member of the ‘Axis of Evil’.  While living in Damascus, I couldn’t imagine Syria becoming another Iraq: there was so much reason to hope for Syria’s future. For example, there were as many women as men in my classrooms.  They were ambitious and committed to careers and so to taking their country forward. (Women had the freedom to dress as they liked in the Damascus I knew, so the fashion in the classrooms was not dissimilar to the fashion I see in the Melbourne CBD.)

Since 2011, there have been Takfiris (a large percentage of them are non-Syrian) killing in Syria as the Khmer Rouge did in Cambodia. They have an ‘ideology’.  Their terror is truly something to fear if you live in Syria and you are not a follower.  But it is rare for our mainstream media to print stories from the point of view of their victims.  Instead we rely on a single narrative and on slogans: Assad is a brutal dictator; he has to go, and the anonymous ‘moderate rebels’  are the goodies.

If you are interested in researching Syria, I can recommend writers and articles, for example the following:

Also, I would highly recommend you check the report by MIT’s Prof Ted Postol and former UN weapons inspector Richard Lloyd. They have written a report that challenges the claim that Assad used chemical weapons against his people – that he had crossed Obama’s ‘red line’.   That is on the reference list I think I may have tweeted you. Please check also the report by Dr Denis O’Brien, a retired US pharmacologist – the link is in the reference list. Dr O’Brien studied all the videos and images that related to the chemical attack in Damascus. He raises critical questions that throw serious doubt on the claims of John Kerry. Lies and ruses could have heated up the war in Syria even further.

Ted Postol answered one of his online critics in a letter you can find at this link   In the letter, he writes of “the scandalous failure of due diligence by the Western mainstream media.”   The war against Syria has been perhaps more than any other war before it an information war.

I hope there is a chance to meet up with you and discuss my concerns.  I hope you understand you are siding with the neo-cons in Washington, the Wahhabis in Saudi Arabia and Qatar, Muslim Brotherhood followers in the Syrian diaspora, adherents of al-Nusra / Al-Qaeda, the former Israeli ambassador to Washington who claims ‘ISIS is the lesser evil’, and one of the most hawkish Americans – Senator John McCain?  And while you do that, you are completely ignoring the hundreds of progressive young Syrians I met in classrooms, the people who were focused on education and taking their country forward.  Such people are some of the first victims of a killing field.

My grandfather was in the 8th Light Horse, so was in Damascus in 1918 when T.E. Lawrence was there.  Because of that Anzac connection I have with Syria, I wrote an article titled, Anzacs and war – Considering a Syrian Perspective.  The historic perspective Syrians have is rarely given thought in the west.  Syrians are a strong, independent people who love their country and who are very proud of it; they would never tolerate a leader such as the one you describe in your article.

By asking you to consider the perspective of the Syrian people, including those millions who support their president, I am not asking you to accept a doctrine similar to the Khmer Rouge’s.  Quite the contrary. I believe it is time for people in Australia to raise their voices against such ‘revolutionary’ belief systems that lead to the horrors of a killing field in Syria.

Many people in Australia may fear that criticising jihadis in Syria might be seen as raising their voice against Islam.  It is not. The majority of members of parliament in Syria are Sunni Muslim, as are the majority of soldiers in the regular army.  The Islam I encountered in Syria was a beautiful religion. It embraced differences. It did not sanction the killing of ‘the other’.  In Damascus, Christmas decorations could be seen sold alongside decorations for the Eid festival.

To stop the killing fields in Syria, we must not only raise our voices against the doctrines that lead jihadis to go to Syria to hate and kill, but we must raise them also against the manipulation of the news in Australia which prevents us from hearing the voices of the victims of the killing fields  If we don’t hear them now, when will we hear them?

I am asking you to consider the perspective of the general population in Syria, people who just want to send their kids to school so they can study to fulfil their dreams to become engineers, doctors or teachers, etc. And people who want to be free, without fear, to believe what they believe.

The Babbila Reconciliation: a Light at the End of Syria’s Dark Tunnel