More Pilot Whales Slaughtered on the Shores of the Faroe Islands

1 Dec 2015 – Yesterday, a pod of 11 pilot whales was slaughtered at the killing beach of Fuglafirði in the Faroe Islands. It is the sixth grindadráp in the archipelago this year, and brings the total number of pilot whales slaughtered in the 2015 drive hunts to 501.

Sea Shepherd strongly disputes claims made in local media that the slaughter was quick.

“For an hour and a half these pilot whales were harassed by small boats, driven onto the killing beach, hooked by their blowholes, dragged onto the rocks and sand and then slaughtered in the presence of their family members,” said Rosie Kunneke, Sea Shepherd Land Team Leader during the organization’s most recent pilot whale defense campaign. “Video and photographs captured by Sea Shepherd earlier this year clearly show the truth of the grindadráp. It is a slow and torturous death. To claim otherwise is a totally outrageous sham.” 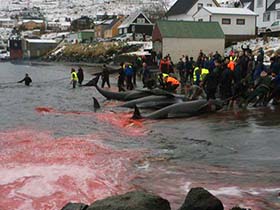 Though most of the killings happen throughout the summer months, a grindadráp can be called at any time of year.

While Sea Shepherd crews have departed the archipelago for this year, the organization has vowed to continue pressure against the grindadráp.

Last month, Sea Shepherd was invited by Denmark’s Faroe Islands Committee to present the organization’s position on the slaughter of pilot whales to members of the Danish parliament.

In the presentation, Sea Shepherd underlined Denmark’s international legal responsibilities to protect pilot whales, to prohibit their intentional killing, and to enforce such legislation nationally, reiterating that Denmark’s support of the grindadráp is in breach of these legal obligations. 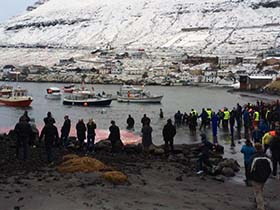 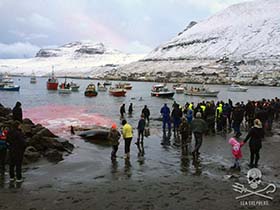 501 pilot whales have now been killed in the Faroe Islands in 2015 alone. Photo: Sigrid Petersen