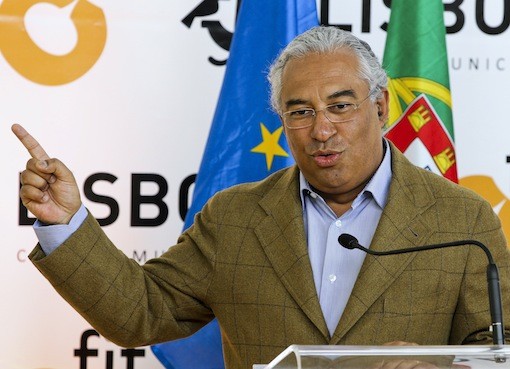 1 Dec 2015 – After several weeks of political brinkmanship, Portugal’s rightwing president, Anibal Cavaco Silva, finally backed off from his refusal to appoint the leader of a victorious left coalition as prime minister and accept the outcome of the Oct. 4 national elections. Silva’s stand down has ushered in an interesting coalition that may have continent-wide ramifications.

Portugal’s elections saw three left parties—the Socialist Party, the Left Bloc, and the Communist/Green Alliance take 62 percent of the vote and end the rightwing Forward Portugal Party’s majority in the 230-seat parliament. Forward Portugal is made up of the Social Democratic Party and the Popular Party.

Even though Forward Portugal lost the election—it emerged the largest party, but garnered only 38 percent of the votes—Silva allowed its leader, former Prime Minister Passos Coelho, to form a government. That maneuver lasted just 11 days. When Coelho introduced a budget loaded with austerity measures and privatization schemes, the left alliance voted it down, forcing the government to resign. 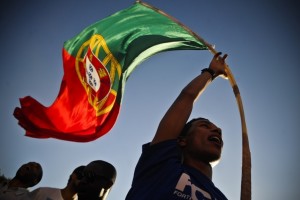 Rather than giving the left alliance a chance to form a government, however, Silva—a former leader of the Social Democrats—insisted that the alliance pledge in writing that it would maintain the country’s role in NATO and commit itself to euro zone financial rules. Portugal is a member of the 19-country euro zone, those countries in the 28-member European Union that use the euro as a common currency.

Silva’s threat was real. While the president’s term only runs until January, the constitution requires a six-month delay between the appointment of a new president and fresh elections. It would have been eight months before the left alliance could take power and roll back some of the more onerous austerity measures that Forward Portugal had installed.

In the face of growing outrage and a threatened general strike, however, Silva finally asked Socialist Party leader Antonio Costa to form a government.

Portugal is the victim of the great 2008 international banking crisis. At the time, Portugal’s debt was small and its public spending modest, but speculators drove up the price of borrowing beyond what the country’s small economy could manage. Through no fault of its own, Portugal suddenly found itself on the edge of bankruptcy.

In 2011, the “Troika”—the European Central Bank, the European Commission, and the International Monetary Fund—lent Portugal $83 billion, but in exchange instituted an austerity regime that raised taxes, slashed education and medical care, cut wages and pensions, and drove 20 percent of the population below the poverty line. The crisis forced almost half a million young people to emigrate, and Portugal ended up with one of the highest income disparities in Europe.

The left alliance government is unprecedented in Portugal, where the Communists and the Socialists have locked horns since the 1974 Carnation Revolution overthrew the 48-year old dictatorship. But four years of austerity have apparently convinced everyone on the left that there needs to be some immediate relief.

The Communists and the Left Bloc have agreed to temporarily shelve their demands to exit NATO and the euro zone, and the Socialists have agreed to roll back austerity measures, cut taxes, and raise pensions and wages. Privatization will be on hold.

There are still major differences within the alliance, however, and not just over dumping the euro and getting out of NATO. The Communists and Left Bloc want debt reduction because much of the country’s encumbrances are the result of private speculators, not profligate public spending. The Socialists did not mention debt reduction during the election and, at least for now, seem committed to repaying all debts.

However, the new government is pledged to loosen austerity’s grip and to challenge the Troika’s tight-fisted formula for economic recovery with one based on economic stimulus. If successful, that could model a new strategy for the rest of Europe, where, in spite of years of austerity, economies are still sluggish or in recession.

Even in countries that show growth, the rate is relative. Spain, for instance, is growing at a respectable 3 percent, but unemployment is over 20 percent—close to 50 percent for young people—and its gross domestic product has still not reached pre-2008 levels. Wages have declined in nine out of 14 quarters. According to Simon Tilford of the Center for European Reform, Spain’s recovery is not due to austerity, but rather, to low interest rates, the declining value of the euro, and a worldwide fall in oil prices.

Certainly the new Portuguese government will not be welcomed by Madrid, where the declining popularity of the rightwing Popular Party’s threatens its control of the Spanish Parliament. It is not unlikely that the Dec. 20 elections in Spain will produce a very similar outcome to Portugal’s: the Popular Party will lose its majority to the center-left Socialist Party and the left Podemos Party. Whether that will result in the kind of coalition that Portugal’s left has stitched together is not clear, in part because the centrist Citizen’s Party is a bit of a wild card and there are complex politics around Catalan independence.

However, even if the smaller Spanish parties cannot unite a’ la Portugal, they will put the brakes on the Popular Party’s austerity policies and its push to muzzle the media and curtail mass demonstrations.

The Portuguese model may end up having an influence on the rest of the European left, where conversations are going on about how to begin moving the continent away from the policies of the Troika. There are at least two major currents  now engaging the left, the so-called “Plan A” and “Plan B.”

Plan B was launched Sept. 11 by five key figures in the European left—Oskar Lafontaine, a former leader of Die Linke, Italian parliamentary deputy Stefano Fassina, Jean-Luc Melenchon of France’s Left Party, and two former Syriza leaders, Zoe Kostntopoulou and Yanis Varoufakis. Plan B is somewhat more nebulous than Plan A, and not everyone who advocates it is on the same page. While it doesn’t contradict Plan A, most of its advocates are not sure the EU is really reformable.

According to Liam Flenady of Green Left Weekly, the September call “remains intentionally open to what this Plan B could look like.” For one thing, it comes off sounding a little wonky: “Parallel payment systems, parallel currencies, digitization of euro transactions, community based exchange systems…euro exit and transformation of the euro into a common currency.”

Not all of the five left figures are in agreement. Varoufakis, Greece’s former finance minister, is for staying with the euro, while the Italian Fassina is not. No one openly attacks Syriza, but most supported Popular Unity, the anti-euro split from Syriza that failed to win any seats in the last Greek election.

A Plan B summit is set for the end of the year.

The disagreements between—and within—the plans reflect the enormous complexity of the task facing Europe’s left, including how to present a united front while still searching for solutions that are not obvious. Is trying to democratize the euro zone like teaching a pig to whistle: can’t be done and annoys the pig? Can a country withdraw from a common currency zone without the Troika destroying its economy? Do countries within the euro zone have the right to experiment with different economic strategies?

Greece was forced to swallow the Troika’s medicine, in part because Syriza assumed that the Troika was essentially rational and actually interested in resolving the crisis. It was not, because the Troika saw Syriza’s resistance as the precursor to a continent-wide movement against its austerity policies.

Portugal is charting a somewhat different path than Syriza. Instead of head-on confrontation, the left is trying to maneuver while strengthening its base by improving people’s lives.  Disagreements will eventually surface—hardly an unhealthy thing—but the Portuguese alliance has decided to kick that can down the road.

On Nov. 20, the Portuguese united left used its majority to approve a law allowing same sex couples to legally adopt children and permit lesbians to obtain medically assisted fertilization. That little act hardly shakes the foundation of the EU, and one doubts it caused the Troika to tremble. But suddenly Portugal is a little bit kinder place than it was a month ago.

Conn Hallinan can be read at dispatchesfromtheedgeblog.wordpress.com