In line with the steady rise in social unrest over the past decade, it’s likely that we will witness an unprecedented escalation in large-scale citizen protests across the globe in 2016 and beyond. 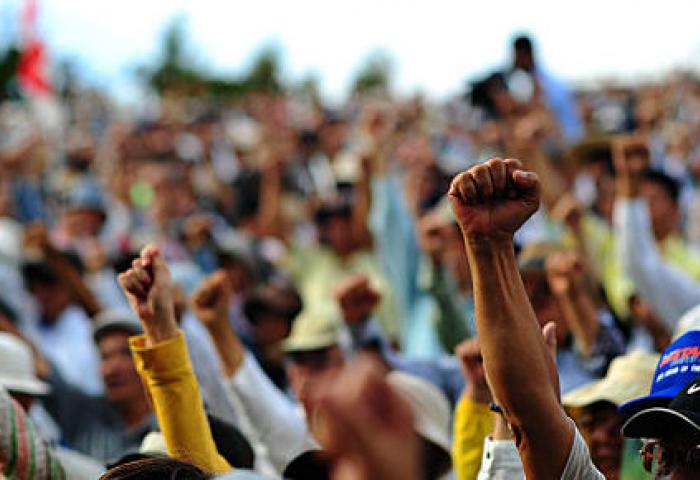 14 Jan 2016 – Research by Dr. David Bailey provides empirical evidence for what many activists and campaigners have long suspected: that we have entered a prolonged period of dissent characterised by an escalation in the magnitude and diversity of public protest. The UK-based data clearly indicates that the catalyst for this upsurge in social unrest was the financial crisis of 2008, which continues to have a detrimental impact on economic security for the vast majority of citizens – even while the combined wealth of the richest 1% continues to soar.

Although many would regard 2011 as the year that mass civil disobedience peaked across the world (as exemplified by the emergence of Occupy and the Arab Spring, or ‘The Protestor’ being named person of the year by Time magazine) Dr. Bailey’s calculations show that 2015 was in fact the year that public mobilisations in the UK hit a record high. It’s not hard to see why protest activity is on an ascending trajectory, especially in light of government policies that continue to redistribute wealth upwards to an affluent minority. As opposition leader Jeremy Corbyn pointed out in response to the current direction of policymaking in the UK, “[this government is] slashing public services, especially at local level, for those who rely on them for security and a decent life. It is driving the NHS and social care into crisis, while accelerating the privatisation and break up of our health and education services.”

Unsurprisingly, most of the protests reviewed in Dr. Bailey’s research were austerity-related and convened in response to concerns around pay and working conditions in the public sector, cuts to social services, the privatization of essential services or the lack of affordable housing. More recent catalysts include climate change and the refugee crisis – pressing international issues that remain wholly unresolved and likely to cause further mobilisations in the period ahead. Indeed, with continuing economic stagnation, more austerity measures and growing levels of hunger and poverty anticipated in the coming months, there is every reason to believe that the scale of public disaffection and dissent in the UK will continue to escalate in 2016 and beyond.

Rising Protest as a Global Trend

The evidence from the UK tallies closely with the situation in other countries, as well as the general perception that social discontent is on the rise across the globe. A spate of studies and meta-analysis in recent years depict how large-scale citizen mobilisations have been intensifying for more than a decade, reaching a new peak in the past five years. According to the conclusion of an extensive study examining the complexities of global protests, “The current surge of protests is more global than the wave that occurred during the late 1980s and early 1990s, reaches every region of the world, and affects the full range of political systems—authoritarian, semiauthoritarian, and democratic alike.”

But it’s not just the magnitude of protest that has been multiplying; the number of people engaged in public rallies is also rising. A study analysing 843 protests that occurred between 2006-13 in 87 countries concluded that 37 mobilisations attracted one million or more participants. For example, in 2013 around 100 million people marched against inequality and dire living standards in India, and 17 million citizens mobilised in Tahrir Square to oust Egypt’s President Morsi – possibly two of the largest demonstrations in history. Commentators also acknowledge the instrumental role that the internet and social media have played in engaging the population during Occupy-style campaigns, and that global communication networks have even facilitated the spread of protests across national borders. In terms of motivation, the evidence suggests that most protests take place in response to pressing socio-economic concerns, the violation of basic human rights or a lack of democratic governance. Put simply, the majority of protests constitute a demand for wealth and political power to be shared more equitably among citizens.

Skeptics might argue that citizen protests are unnecessarily disruptive and do more harm than good, or that they are ineffective at changing laws and regulations. However, the research demonstrates that this is not the case. Although some 63% of stipulations made by protestors between 2006-2013 were not met by their governments, many of these were for systemic reforms which can only be implemented progressively over time. Moreover, the influence that large-scale demonstrations have on public consciousness should not be underestimated – a point well-articulated in the film ‘We are Many’, which details how the anti-war marches that took place prior to the invasion of Iraq influenced Egyptian activists during the Arab Spring almost a decade later.

A New Expression of Democracy

It’s reasonable to conclude from a simple analysis of these trends that a revolutionary change is taking place in the global political landscape. As policymaking becomes increasingly subverted by powerful vested interests, the resulting democratic deficit is being filled by concerned citizens who are demanding that governments take heed of their collective demands. This signifies a fundamental shift in the relationship between citizens and the State, and heralds a new expression of democracy that is still in its infancy but already capable of shaping public opinion, influencing policy discussions and even toppling governments.

The peoples’ voice is likely to strengthen dramatically during 2016, especially in response to a deteriorating geopolitical, socio-economic and environmental situation that necessitates a far more effective form of intergovernmental cooperation than has yet been achieved. In response to this epochal challenge, perhaps citizens campaigning on separate issues or based in different countries will also begin to coalesce their activities more concretely around a common set of principles and global priorities, such as a united demand for governments to finally secure basic human rights universally. Without such expressions of international unity and solidarity among both policymakers and protesters, it is difficult to imagine how today’s converging crises can be addressed in a way that upholds the global common good.

The only certainty is that government ministers will invite further social unrest if they fail to act on the rising demand for real democracy and justice that is at the heart of the current wave of popular unrest. The way forward has long been clear to global activists and engaged citizens: curtail the power of elites and corporations, and ensure that governance systems truly serve the people and protect the biosphere. As a minimum – and in line with the growing demands of a disaffected majority – this necessitates a radical decentralisation of power and the redistribution of wealth and resources across the world as a whole.

Rajesh Makwana is the director of Share The World’s Resources, a civil society organisation campaigning for a fairer sharing of wealth, power and resources. He can be contacted via rajesh@sharing.org