When ‘Your Heart Is a Muscle,’ Empathy Is a Revolutionary Act 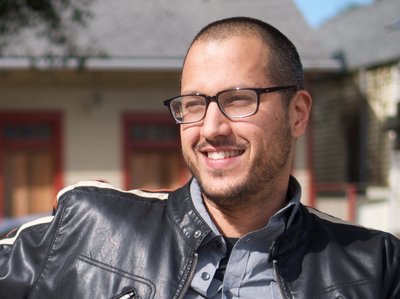 Novelist Sunil Yapa has lived all around the globe, including in Chile, China, Greece, Guatemala, Argentina and India. He says his father, who was a consultant for the World Bank, instilled in him a sense of “the world being an interconnected place.”
Gilbert Chong/Lee Boudreaux Books

21 Jan 2016 – When Sunil Yapa’s laptop was stolen, he didn’t just lose his computer — he also lost the 600-page novel saved on it. Yapa summoned the will to write it all over again — but a little shorter this time. This second version has turned into a newly published novel about recurring themes in American history.

Your Heart is a Muscle the Size of a Fist was inspired by a real-life event; in 1999, thousands of demonstrators disrupted a meeting of the World Trade Organization in Seattle. Badly outnumbered police resorted to using tear gas, pepper spray and rubber bullets.

“Here’s a moment that we forgot about, or got lost in the news cycle that I think was a very important moment in American history,” Yapa tells NPR’s Steve Inskeep.

Yapa’s novel arrives just as the country is in the midst of a presidential campaign that’s often focused on trade deals, big corporations and other features of globalization — a lot of the same issues people were protesting back in 1999. Yapa decided to reimagine this story of protest and police.

“What I wanted to do was sort of unpack the soundbite that we hear all too often: ‘Violent Protesters Clash With Police,'” he says. 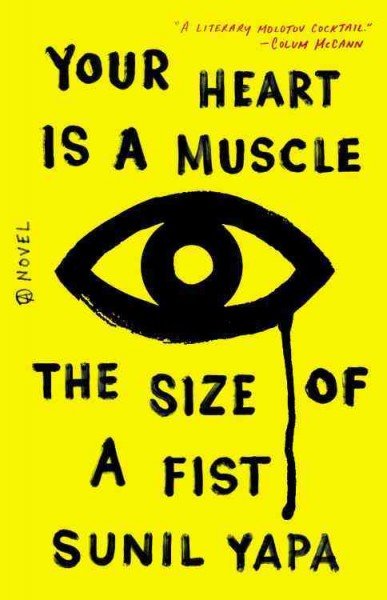 Your Heart Is a Muscle the Size of a Fist by Sunil Yapa Hardcover, 312 pages

On an image he found during his research

I came across a picture of a woman on the streets in the protest. She has long red hair, she’s on her knees. She’s clearly been hit by a baton. She has a wound on her forehead and I just thought: Wow, why is this woman here? What world are we living in that she’s protesting for the rights of someone who makes shoes in Bangladesh or Sri Lanka?

On his character Victor, a young man who shows up hoping to sell drugs to the protestors

Victor … is a 19-year-old, biracial son of the chief of police who has run away, traveled the world and now he’s back in Seattle. And he has no interest in the politics. He’s really … he’s estranged from his father, he’s lost his mother and he’s really looking for a family.

He’s so desperate to belong somewhere that he’s willing to join these protests without any training and put himself into the most vulnerable of positions — which was “lockdown” … people in the center of an intersection in a circle locked in chains and pipes, waiting for the cops to come to clear the street. He’s so desperate to belong to a family, he’s willing to put himself in that position. And that’s a novelist’s dream, if you find a character like that.

On the way he did his research

It’s both a curse and a blessing to be writing about a recent historical event. It’s a blessing in the sense that there was an amazing amount of resources. … The University of Washington has an archive in the basement — diaries that people have sent in, there’s boxes of VHS tapes from the day.

One of my favorite resources: I went to the archives in the City Hall in Seattle and I found recordings of all five days of the police scanner traffic. And so it’s obviously very intimate — just the cops talking back to each other or talking to the command center.

Very quickly, because they were so out-numbered, they start to sound very nervous and, frankly, scared. I think the first time I heard one of their voices being scared, that was the first moment I thought: Ah, here’s a human moment — I can start to write some officers as real characters, as real humans.

On whether he had current-day police controversies in mind

I wasn’t directly speaking to Ferguson or Baltimore or some of the other protests we’ve seen in the U.S. I think if there’s a connection, it’s that when people feel cut off from decision-making and … aren’t included in the decisions, they take to the streets. And what I see, when I look at that, it’s a very desperate measure. It’s almost an expression of grief — people feeling powerless in a way.

On the way people protest when they feel powerless

I guess I feel that way about this amorphous thing we call “globalization” or “global capitalism.” And there are some facts in the world that are a little uncomfortable, and I think there are a lot of people … [feel] this sense of sadness about the way world works, but a real sense of: What do I do about it? What can I do but take to the streets?

On his own global outlook

One of the important things for me is that my father is from Sri Lanka. But even more importantly, he was a consultant for the World Bank. So when I grew up, every summer my dad would be in the Philippines.

I remember him coming back from Bolivia — and these are in the days before the Internet. … He came back wearing a poncho with a cassette tape of pan flutes. And I thought, “Whoa, what is this mountain music?” I must’ve been 6 years old. And I think that really instilled, in me, a real sense of the world as one place, and the world being an interconnected place.

Listen to the Story