Bad Blood: The First International and the Origins of the Anarchist Movement – A Book Review

We Do Not Fear Anarchy, We Invoke It: The First International and the Origins of the Anarchist Movement, by Robert Graham. AK Press, 2015. 301 pages. 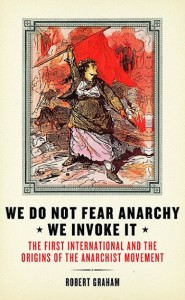 The International Workingmen’s Association — sometimes called “The International,” or “The First International,” depending on your views concerning the legitimacy of its subsequent incarnations — was formed in 1864 by representatives of numerous European socialist and workers’ organizations, in order to coordinate strike activity and otherwise aid the working class in its struggle against capitalism. It is remembered now less for anything that it did than for its spectacular schism, the expulsion of its anti-statist elements, and its conversion into a body (perhaps, at the time, the body) of organized Marxism. If unity was the International’s aim, division is its legacy.

In We Do Not Fear Anarchy, We Invoke It: The First International and the Origins of the Anarchist Movement, Robert Graham recounts the standard anarchist version of this story in painful step-by-step detail. By this telling, Marx personally resorted to bullying and swindling in order to divide the left, excommunicate his opponents, and move the socialist movement toward a strategy of Party-building and state control. (No doubt Marxists have their own account — presumably more flattering.)

The details of this faction fight will be disconcertingly familiar to anyone who has witnessed internecine conflict on the left, major or petty.  Marx formed secret alliances within the International, libeled his adversaries as police informants, seriously (and, one suspects, deliberately) misrepresented opposing views, launched ad hominem attacks, manipulated or circumvented democratic procedures, and on and on and on. Since that time, within a certain part of the left, such maneuvers have become, not merely tactics, but a style of conflict, almost an aesthetic, or even a politic in themselves. Would-be Machiavellians defend this sort of cheap amoralism in the name of doing whatever it takes to bring about revolution — but in practice it is often self-defeating, destroying campaigns in petty squabbles while hobbling the movement and gaining no real advantage for one’s own party. We might suspect, in such cases, that deceit and betrayal are not mere expedients, but are in fact valued for their own sake. The operative principle seems to be: the dirtier the means, the better. One wonders how that political culture has been transmitted from Marx’s time to today. Or is that just how politics always is, no matter what the ideology?

The thing to remember, however, is that Marx may have been a scoundrel, but nothing follows from that fact.  It might not reflect well on his character, or that of his imitators today. But it says nothing about the wisdom of his positions, the truth of his theories, or the soundness of his strategy. Anarchists may wish that it did, just as fervently as they wish to forget Bakunin’s anti-semitic rants, but the truth is that no amount of sectarian bickering, personal slander, or procedural cheating can establish or affect the truth of a sociological theory, one way or the other. (It may, though, tell us something about Marx’s confidence in the inevitability of his predictions.)

What is more interesting than the century-old sectarian drama is Graham’s argument that anarchism only developed as a distinct philosophy as a result of the split.  As he explains it, the controversies within the International — concerning centralization, organizational hierarchy, electoral politics, and the capture of the existing state — together formed a fault line between the Marxists and their anti-authoritarian adversaries.  Those dismissed or alienated from the International, Bakunin especially, began to draw connections between their points of disagreement and formulate them into a theory of anarchism. As Graham puts it: “Learning of his… expulsion from the International, Bakunin began developing a more incisive critique of Marxism that went beyond simply criticizing Marx and Engels’s underhanded tactics and dealt with the theoretical underpinnings and limitation of Marx’s theories. In the process, Bakunin began to more clearly demarcate the theoretical differences between anarchism and Marxism.” In particular, he rejected Marx’s economic determinism, the idea of revolutionary government and the dictatorship of the proletariat, centralization, and state control of the economy.

This account suggests that anarchism became anarchism in part by virtue of it not being Marxism.  And yet, what stands out most boldly in Graham’s telling, to me anyway, are not the differences producing the split, as important as those are, but the mutual influence between the two tendencies.  In building his theory, Marx drew on previous critiques of capitalism, including Proudhon’s; later anarchists, in turn, largely swallowed Marx’s economics whole — with Bakunin referring to himself as Marx’s “disciple.” “[The] anarchists of the International. . .,” Graham writes, “admired Marx’s critique of capitalism, while rejecting his politics.”

Moreover, anarchism and Marxism have continued to cross-pollinate ever since, often to the chagrin of partisans on each side (myself included, sometimes). What Graham shows quite clearly is how interconnected the two tendencies always have been. Marx was first influenced by, and then defined himself against, Proudhon; Bakunin was simultaneously influenced by and defined himself against Marx. From the outside, it is not even clear whether it makes sense to talk of “two” traditions, Marxist and anarchist — or whether each is, and has always been, part of a much broader socialist movement with both libertarian and authoritarian poles.

More than a century after the rift, this awkward origin story continues to reverberate, as increasing numbers of anarchists conceive of themselves as being “post-left.”  There is a sense in which anarchism was always post-left — the result of a break with Marxism, the party form, and state socialism, at precisely the moment that those ideas achieved dominance within the radical movement. That made anarchism a kind of heretical cult, in the shadow of the established Marxist church. In another sense, however, anarchism represented a continuation of the left by other means, and a loyal (sometimes purist) adherence to the original, half-forgotten ideals of liberty, equality, and solidarity.

Since the disintegration of the Soviet Union, the canonical authority of Marxism has been much less certain. Yet anarchists have not stepped forward to fill the organizational and philosophical vacuum left behind. The reasons for that failing are numerous, but among them must certainly be counted the fact that we have become accustomed to our own marginalization and have largely ceased to think in terms of mass movements and international revolution. Graham’s book may be useful here, too, to remind anarchists of our original aims — for freedom and equality, the overthrow of capitalism and the destruction of the state. The International, it seems, was not the right body to achieve that. But a nebulous milieu, antagonistic to the left and divorced from its socialist roots, cannot even claim to make the effort.

Kristian Williams is the author of Our Enemies in Blue: Police and Power in America, American Methods: Torture and the Logic of Domination, and Hurt: Notes on Torture in a Modern Democracy. He lives in Portland, Oregon.