Cameron At Large: Want Not to Become a Terrorist? Speak Fluent English!

4 Feb 2016 – “Do you speak English fluently? No? Then you risk becoming a terrorist.” IPS posed this dilemma to some young Muslim women living in Cairo, while explaining that this appears to be UK prime minister David Cameron’s formula to judge the level of Muslim women’s risk to fall, passively, into the horrific trap of extremism.

Here you have some answers: “He must be kidding, I can’t believe that…,” says Egyptian university student Fatima S.M.

“This is just insulting! What does language have to do with such a risk?” responds Fakhira H. from Pakistan who is married to an Egyptian engineer.

“This pure colonialism, Cameron still dreams of the British Empire,” reacts Nigerian Afunu K. who works at an export-import company in Cairo.

“Oh my God! We knew that Muslim women are victims of constant stigmatisation everywhere, in particular in Western countries… But I never expected it to be at this level,” said Tunisian translator Halima M. 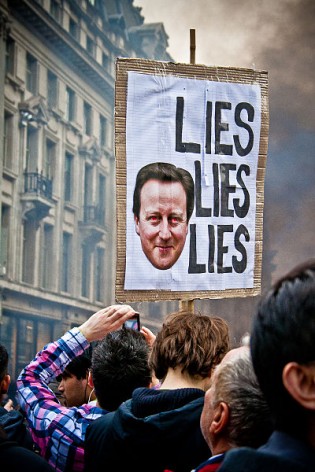 Of course this is not at all about any scientific survey-just an indicative example of how Muslim women from different countries and backgrounds see Cameron’s recent surprising statement: Muslim women who fail to learn English to a high enough standard could face deportation from the UK, the prime minister said on 18 January.

Cameron suggested that poor English skills can leave people “more susceptible” to the messages of groups like the Islamic State in Iraq and the Levant (DAESH).

“After two and a half years they should be improving their English and we will be testing them,” the UK prime minister stated. “We will bring this in October and it will apply to people who have come in on a spousal visa recently and they will be tested.”

Cameron’s comments came as his Conservative government launched a $28.5 million language fund for Muslim women in the United Kingdom as part of a drive to “build community integration.”

Current British immigration rules require that spouses be able to speak English before they arrive in the UK to live with their partners. “…They would face further tests after two and a half years in the UK, said Cameron, before threatening them: “You can’t guarantee you will be able to stay if you are not improving your language.”

The number of Muslim living in the UK is estimated to be around 2.7 million out of Britain’s total population of 64 million.

The British government estimates that around 190,000 Muslim women (about 22% of the total) living in the UK speak little or no English.

“… If you are not able to speak English, not able to integrate, you may find, therefore, you have challenges understanding what your identity is, and therefore you could be more susceptible to the extremist message,” the UK prime minister affirmed.

Cameron further explained that a lack of language skills could make Muslims in the U.K. more vulnerable to the message of extremist groups. “I am not saying there is some sort of causal connection between not speaking English and becoming an extremist, of course not,” he said.

Significantly, Cameron’s cabinet did not ratify last summer the so-called Istanbul Convention, a pan-European convention establishing minimum standards for governments to meet when tackling violence against women. The UK had signed up on this Convention three and a half years ago. The Convention entered into force eighteen months ago.

The UK prime ministers’ statements came under fire in his own country.

This is about a “dog-whistle politics at its best,” said the UK Liberal Democrat leader Tim Farron.

Cameron’s idea is “lazy and misguided”… a “stereotyping of British Muslim communities,” reacted Sayeeda Warsi, former Conservative Party co-chair. “I think it is lazy and sloppy when we start making policies based on stereotypes which do badly stigmatise communities.”

Andy Burnham, the Home Affairs spokesman for the Labour Party shadow cabinet, accused Cameron of a “clumsy and simplistic approach” that is “unfairly stigmatising a whole community.”

These are only a few selected reactions of a number of figures who have the chance for their voices to be heard.

But imagine you are a Muslim woman and live in the United Kingdom. Like any other woman, you already face many daily hurdles in this world of flagrant gender inequality.

Then recall that these challenges are augmented by the fact that you are a foreigner. Your religion in this case puts additional heavy stigmatisation weight in your mind and on your shoulders.

What would you think?