“Very confident” four-year-olds outsmart hunters and protect their clan. Just days after a poacher’s snare had killed one of their own, two young mountain gorillas worked together to find and destroy traps in their Rwandan forest home, according to conservationists on the scene. 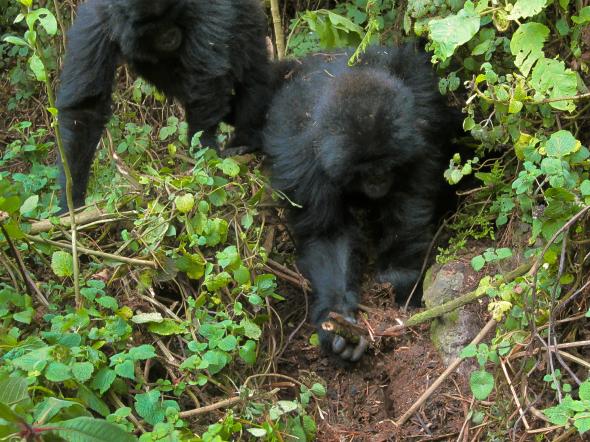 “This is absolutely the first time that we’ve seen juveniles doing that … I don’t know of any other reports in the world of juveniles destroying snares,” said Veronica Vecellio, gorilla program coordinator at the Dian Fossey Gorilla Fund‘s Karisoke Research Center, located in the reserve where the event took place.

“We are the largest database and observer of wild gorillas … so I would be very surprised if somebody else has seen that,” Vecellio added.

Bush-meat hunters set thousands of rope-and-branch snares in Rwanda’s Volcanoes National Park, where the mountain gorillas live. The traps are intended for antelope and other species but sometimes capture the apes.

Adults are generally strong enough to free themselves. Youngsters aren’t always so lucky.

Just last week an ensnared infant named Ngwino, found too late by workers from Karisoke, died of snare-related wounds. Her shoulder had been dislocated during escape attempts, and gangrene had set in after the ropes cut deep into her leg.

The hunters, Vecellio said, seem to have no interest in the gorillas. Even small apes, which would be relatively easy to carry away for sale, are left to die.

Poachers build the snares by tying a noose to a branch or a bamboo stalk, Vecellio explained.

Using the rope, they pull the branch downward, bending it. They then use a bent stick or rock to hold the noose to the ground, keeping the branch tense. A sprinkling of vegetation camouflages the noose.

When an animal budges the stick or rock, the branch springs upward, closing the noose around the prey. If the creature is light enough, it will actually be hoisted into the air.

Rwema and Dukore Save the Day

Every day trackers from the Karisoke center comb the forest for snares, dismantling them to protect the endangered mountain gorillas, which the International Fund for Nature (IUCN) says face “a very high risk of extinction in the wild.”

On Tuesday tracker John Ndayambaje spotted a trap very close to the Kuryama gorilla clan. He moved in to deactivate the snare, but a silverback named Vubu grunted, cautioning Ndayambaje to stay away, Vecellio said.

Suddenly two juveniles—Rwema, a male; and Dukore, a female; both about four years old—ran toward the trap.

As Ndayambaje and a few tourists watched, Rwema jumped on the bent tree branch and broke it, while Dukore freed the noose.

The pair then spied another snare nearby—one the tracker himself had missed—and raced for it. Joined by a third gorilla, a teenager named Tetero, Rwema and Dukore destroyed that trap as well.

The speed with which everything happened makes Vecellio, the gorilla program coordinator, think this wasn’t the first time the young gorillas had outsmarted trappers.

“They were very confident,” she said. “They saw what they had to do, they did it, and then they left.”

Silverbacks in the Kuryama group have occasionally been caught in the snares, so Vecellio thinks the juveniles would have known the traps are dangerous.

“That’s why they destroyed them,” Vecellio said.

Despite the unprecedented nature of the event, Vecellio said she wasn’t surprised by the reports. “But,” she said, “I’m always amazed and very proud when we can confirm that they are smart.”

“Chimpanzees are always quoted as being the tool users, but I think, when the situation provides itself, gorillas are quite ingenious,” he said.

Cranfield speculated that the gorillas may have learned how to destroy traps by watching the Karisoke center’s trackers.

“If we could get more of them doing it, it would be great,” he joked.

Karisoke’s Vecellio, though, said actively instructing the apes would be against the center’s ethos.

“No we can’t teach them,” she said. “We try as much as we can to not interfere with the gorillas. We don’t want to affect their natural behavior.”