16 Dec 2015 – Yesterday the Commissioners of the Truth and Reconciliation released their final report. Six years. Seven volumes. Thousands of pages.

Tens of thousands of tears. 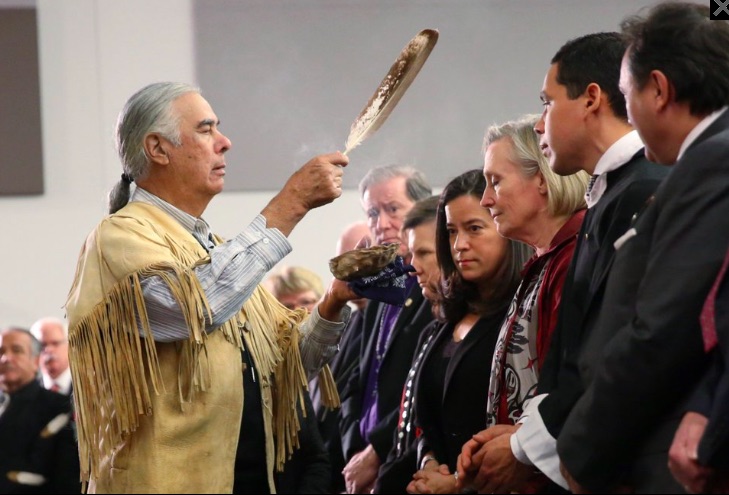 The materials contained within the reports will resonate for years to come but it will be up to us, collectively as Canadians, to determine whether the Calls to Action are implemented; whether the truth is fully acknowledged; whether reconciliation is achieved.

Through the work of the Commission I have witnessed thousands, sometimes tens of thousands, join together in collective actions of reconciliation and with the brave voices of Survivors leading the way, I have seen things change, both at home and abroad.

Last week I had the opportunity to visit the Organization of American States (OAS) located in Washington D.C.

I was part of a multi-person panel that included members of the Royal Winnipeg Ballet, former MP and well-known film producer Tina Keeper and Canada’s ambassador to the OAS. Two elders from Manitoba gave meaningful words of prayer and traditional perspective to open the day. Two dancers from the Royal Winnipeg Ballet performed an eight-minute version of the Going Home Star ballet which yet again left me moved and in awe of the power of the arts to convey emotion, truth and beauty all at once.

For me, the invitation was a call for deep reflection. What would I say to an international audience about this history we are trying to come to terms with?

For the past six years, much of my own work has focused on documenting Canada at its worst. The work of statement gathering and document collection for the Truth and Reconciliation Commission placed me in front of thousands of survivors — most of whom recounted terrible stories of abuse, neglect, pain and suffering. The documentary history we collected revealed long-standing knowledge that the residential school system was broken, mismanaged, misguided and deeply unethical.

Yet the residential school system endured for over 160 years.

We, as a country, are just now starting to come to terms with the sobering realization that the systematic destruction of indigenous cultures, languages, family structures, lands and ceremonies amounted to cultural genocide.

The cold hard truth is that Canada has failed indigenous peoples miserably.

Instead of protecting Indigenous rights, for many years our country eroded, attacked and beat those very rights out of Indigenous peoples. My own nation — the Metis nation — had guns turned against it when they sought to protect their way of life. Other nations have suffered the same. And we need remember that the attack on indigenous peoples through the residential schools attacked the most sacred of all bonds that exists in this world — that between parent and child.

What was I to say to an international audience with these historical realities of genocide and mass human rights abuse so deeply enmeshed in who we are as a nation?

I said that I remained proud to be a Canadian.

I remain proud to be a Canadian not because of who we were, but because I see us growing and embracing the calls for reconciliation that are now ringing out across the country.

Through the leadership of visionaries like Phil Fontaine, Paul Martin and Frank Iacobucci, massive achievements such as the Indian Residential Schools Settlement Agreement were made possible. The TRC Commissioners have brought us further down the path and additional truths will emerge from the critically important inquiry into missing and murdered Indigenous women and girls.

Yesterday we heard a tearful prime minister state that Survivors of the schools would never be forgotten and that a total renewal of the relationship between Canada and Indigenous peoples is needed.

Through words like these and the powerful leadership of the Truth and Reconciliation Commission, I sincerely believe we are reaching a tipping point where we as a nation are really beginning to take that long hard look in the mirror with new eyes.

Across the country, educators are rallying to the cry to incorporate a more accurate and fuller picture of the contributions of indigenous peoples in Canadian history. Universities are embracing indigenous achievement and inclusion, the courts are recognizing Indigenous rights time after time, and we now have a government actively listening to Indigenous peoples. We are transforming reconciliation from the leadership of a few to the collective will of the many.

Our nation’s treatment of Indigenous peoples should not and can not be a source of pride for us as a country. We need to address this and the work ahead of us is great.

But change is possible. We can change, we are changing, and I am very hopeful that this momentum we have collectively generated will continue.

I am excited about the future that lies ahead of us and I am proud to be part of this country that is embracing this cry for change and reconciliation.

Ry Moran is Director of the National Centre for Truth and Reconciliation.

Thank you to Janet Hudgins, the CPNN reporter for this article.