Why Banksy’s Art Is Such a Deadly Political Weapon

Banksy’s latest work—relating to the tear-gassing of migrants in Calais by French police—highlights his skill for crafting pieces of piercing, immediate relevance. 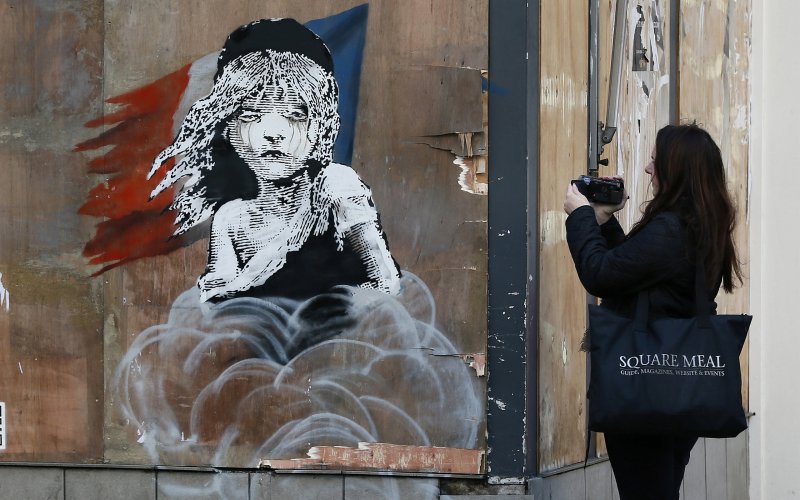 27 Jan 2016 – In a 2007 interview with The New Yorker, Banksy, the subversive British graffiti artist, was asked what drew him to his work. “I used to want to save the world,” he responded dryly, “but now I’m not sure I like it enough.”

The paradox of that sentiment has been a constant in his stencilled paintings, a portfolio of facile one-liners manifested in text and images.

Banksy’s most recent creation popped up over the weekend in London, on a wall opposite the French embassy: a mural re-imagining an iconic image of Cosette from the musical Les Misérables, crying as a cloud of tear gas envelops her.

The arresting work is a pointed critique of the alleged use of tear gas by French police in the slum-like “Jungle” Calais refugee camp, where roughly 5,000 migrants from countries like Syria, Libya, and Eritrea are thought to have settled.

Last week, with assistance from aid groups like HelpRefugees and Care4Calais, French authorities evicted 1,500 from the overflowing shantytown, moving them into churches and other facilities.

French police have denied using tear gas, but a video that surfaced after the eviction shows them doing just that during a previous raid of the refugee camps.

The video can be accessed by anyone who passes Banksy’s Cosette: beneath her is a stencilled QR barcode which links to the footage when viewers scan it with their smartphones. (Banksy has confirmed that the work is indeed his, posting an image of the mural on his website. His representatives did not return requests for further comment.)

The Cosette mural is the artist’s first interactive work—a clever move by Banksy that underscores how genuinely responsive and in-the-moment his work is. It’s also his latest in a series of commentaries on Europe’s migrant crisis, many of which appeared in and around the Calais refugee camp last December.

One was an image of Steve Jobs, the late Apple co-founder, clutching a dated Macintosh computer in one hand and a trash bag slung over his shoulder—a reference to Jobs’s biological father, who immigrated to the U.S. from Syria after World War II.

Banksy, who rarely comments on his work to the press, released a statement about the Jobs mural to The New York Times via a spokesperson.

“We’re often led to believe migration is a drain on the country’s resources, but Steve Jobs was the son of a Syrian migrant,” he said. “Apple is the world’s most profitable company, it pays over $7 billion a year in taxes—and it only exists because they allowed in a young man from Homs.”

Other of Banksy’s works in Calais included a re-imagining of Théodore Géricault’s The Raft of Medusa, the infamous 19th century painting of shipwreck survivors who crashed while trying to colonize Senegal.

Géricault drew meticulously from the accounts of two survivors when painting his masterpiece. In Banksy’s version, the survivors wave frantically, as a yacht fit for Jay-Z darts across the horizon.

Banksy also made political waves last summer with his temporary Dismaland “Bemusement Park” in Weston-super-Mare, the dilapidated English seaside resort, where he constructed an installation of boats packed with refugees.

Banksy’s art has long been rife with political overtones, like his 2005 trompe l’oeil stencils of holes on the Palestinian side of Israel’s West Bank wall. (In a statement, the elusive graffiti artist said that the wall “is illegal under international law and essentially turns Palestine into the world’s largest open prison.”) He returned to the region last spring, painting murals on buildings and ruins in Gaza.

Banksy once told his friend, the author Tristan Manco, that he likes “the political edge” of his work. “All graffiti is low-level dissent, but stencils have an extra history,” he said. “They’ve been used to start revolutions and to stop wars.”

Indeed, Banksy seems to be mounting his own revolution against the officials in Europe who have sanctioned refugees for crossing their borders.

Politics and activism are frequently referenced by artists, both little-known and famous, but the immediacy and accessibility of Banksy’s politically-inspired work makes it especially potent.

“All art is political in some way, but Banksy always has that quick response,” Rachel Campbell Johnston, the London Times art critic, told The Daily Beast. “It’s prominent because it’s in the moment and visible to the public. He uses art as a weapon. I think many artists use politics in order to get into galleries, whereas Banksy does the opposite.”

War has always been a mainstay for artists. Johnston cited British artist Mark Wallinger as an artist who, like Banksy, has responded cleverly and immediately to touchstones in political debates.

After Brian Haw’s Iraq war protest in Britain’s Parliament Square was confiscated in 2005 under a law that said protests are forbidden in a specified area around Parliament, Wallinger re-created the camp in a 2007 exhibit at the Tate Modern—technically still within the “exclusion area” surrounding Parliament.

Johnston also cited “Fuck the heir for Puppy Bear,” a pornographic performance by Voina, the Russian art collective, in response to Dmitry Medvedev’s 2008 presidential election (he served until 2012).

“Everyone thought Medvedev was a puppet for Putin, so they all stripped naked and fucked each other up the ass,” Johnston said of the show, which was staged in February 2008 at the Moscow Biological Museum.

While some art critics think Banksy’s art is too obvious, others think his on-the-nose political one-liners are genius.

“It’s very sharp as a political cartoonist’s joke, with a leaning-against-the-bar punchline that appeals particularly to the English sense of humor,” said Johnston.

The political activism in his work resonates even more with the average viewer because he’s an anti-establishment artist.

Even as his artwork fetches hundreds of thousands of dollars at auction, Banksy gives it away for free. He isn’t represented by galleries and, as a result, he’s entirely in control of his own narrative.