You Have Now Landed in Geneva, Syria

29 Jan 2016 – The alleged Syrian peace process now enters its Geneva charade stage. This could last months; get ready for lavish doses of posturing and bluster capable of stunning even Donald Trump.

The notion that Geneva may be able to impersonate Damascus in a suit-and-tie pantomime is ludicrous to begin with. Even the UN envoy, the sartorially superb Staffan de Mistura, admits the Sisyphean task ahead – even if all relevant players were at the table.

Then we have Syrian “opposition figure” George Sabra announcing that no delegation from the Riyadh-based High Negotiations Committee will be at the table in Geneva. As if Syrians needed an “opposition” instrumentalized by Saudi Arabia.

So in the interest of providing context, here’s an extremely concise recap of recent, crucial facts on the Syrian ground which the “new capital” Geneva may ignore at its own peril.

Let’s start with last summer, when Iranian Quds Force superstar commander Qasem Soleimani laid down the law, in person, in Moscow, establishing without a doubt the grim situation across the Syrian theater of war.

Essentially Soleimani told the Kremlin and Russian intelligence that Aleppo might be about to fall; that Jabhat al-Nusra was at the doors of southern Damascus; that Idlib had fallen; and Latakia – home to Russia’s naval base at Tartus – would be next. 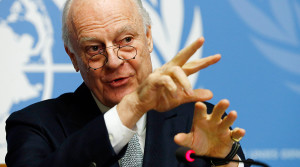 One can imagine the effect of this jolt of realpolitik on President Putin’s mind. That clinched his resolution to stop the fall of Syria, and prevent it from becoming a Libyan remix.

The Russian Air Force campaign turned out to be the ultimate game-changer. It is in the process of securing the Damascus-Homs-Latakia-Hama-Aleppo network – the urban, developed Western Syria that holds 70 percent of the country’s population. ISIS/ISIL/Daesh and/or Jabhat al-Nusra, a.k.a. al-Qaeda in Syria, have zero chances of taking over this territory. The rest is mostly desert.

Jaysh al-Islam – a motley crew weaponized by Saudi Arabia – still holds a few positions north of Damascus. That’s containable. The country bumpkins in Daraa province, south of Damascus, could only make a push towards the capital in an impossible 1991 Desert Storm context.

“Moderate rebels” – that Beltway concoction – did try to hold Homs and Al-Qusayr, cutting off the resupply of Damascus. They were repelled. As for the gaggle of “moderate rebels” who took all of Idlib province, they are being pounded mercilessly for four months now by the Russian Air Force. Aleppo’s southern front is also being secured.

It’s easy to pinpoint who’s livid with all the Russian action: Saudi Arabia, Turkey and – last but not least – the ‘Empire of Chaos’, all at the table in Geneva.

Jabhat al-Nusra – remote-controlled by Ayman al-Zawahiri – is intimately linked to a gaggle of Salafi-jihadists in the Saudi-sponsored Army of Conquest, as well as tactically allied with myriad outfits nominally grouped in the nearly extinct Free Syrian Army (FSA).

The CIA, using the Saudis for plausible deniability, fully weaponized “vetted” FSA outfits, which received, among other things, TOW anti-tank missiles. Guess who “intercepted” virtually all the weapons: Jabhat al-Nusra.

The follow-up was nothing short of hilarious: Washington, Ankara and Riyadh furiously denouncing Moscow for bombing their “moderate rebels” and not ISIS/ISIL/Daesh.

Slowly but surely, the Syrian Arab Army (SAA), parallel to the Russian offensive, retook the initiative. The “4+1” – Russia, Syria, Iran (Special Forces, many of them from Afghanistan), Iraq, plus Hezbollah – started coordinating their efforts. Latakia Province – which hosts not only Tartus but the Khmeimim Russian airbase – is now under total control by Damascus.

And that brings us to Ankara’s nightmares. Russian Air Force smashed most of Ankara’s Turkmen proxies – heavily infiltrated by Turkish fascists – in northwest Syria. That was the key reason for Sultan Erdogan’s desperate move of shooting down the Su-24.

It’s by now clear that the winners, as it stands, on the ground, are the “4+1”, and the losers are Saudi Arabia and Turkey. So no wonder the Saudis want at least some of their proxies at the negotiating table in Geneva, while Turkey tries to change the subject by barring the Syrian Kurds: these are accused of being terrorists, much more than ISIS/ISIL/Daesh.

No terrorists at table? Turkey ‘threatens to withdraw’ from Syria talks over Syrian Kurds https://t.co/smPbjmcBN6 pic.twitter.com/h3rNKr5C2v

As if this was not messy enough, US ‘Think Tankland’ is now spinning there is an “understanding” between Washington and Ankara for what will be, for all practical purposes, a Turkish invasion of northern Syria, under the pretext of Ankara smashing ISIS/ISIL/Daesh in northern Aleppo.

This is utter nonsense. Ankara’s game is three-pronged; prop up their heavily battered Turkmen proxies; keep very much alive the corridor to Aleppo – a corridor that crucially includes the Jihadi Highway between Turkey and Syria; and most of all prevent by all means necessary that YPG Kurds bridge the gap from Afrin to Kobani and unite all three Syrian Kurd cantons near the Turkish border.

None of this has anything to do with fighting ISISL/ISIL/Daesh. And the nuttiest part is that Washington is actually assisting the Syrian Kurds with air support. Either the Pentagon supports the Syrian Kurds or Erdogan’s invasion of northern Syria; schizophrenia does not apply here.

A desperate Erdogan may be foolish enough to confront the Russian Air Force during his purported “invasion”. Putin is on the record saying response to any provocation will be immediate, and lethal. To top it off, the Russians and Americans are actually coordinating airspace action in northern Syria.

This is bound to be the next big thing, fully eclipsing the Geneva pantomime. The YPG and its allies are planning a major attack to finally seize the 100-kilometer stretch of the Syria-Turkey border still controlled by ISIS/ISIL/Daesh – thus reuniting their three cantons.

Erdogan was blunt; if the YPG pushes west of the Euphrates, it’s war. Well, looks like war then. The YPG is getting ready to attack the crucial towns of Jarabulus and Manbij. Russia most certainly will aid the YPG to reconquer Jarabulus. And that will directly pit – once again – Turkey against Russia on the ground.

Geneva? That’s for tourists; the capital of the Syrian horror show is now Jarabulus.