Afghanistan War: Just What Was the Point?

25 Feb 2016 – It is worse in Afghanistan now than I ever could have imagined. And I was a pessimist.

Fatigue was always going to be the decider. Western fatigue with the horrors their troops saw, and with the violence inflicted daily on Afghans themselves. The fatigue of the financial cost, where a power station that was barely ever switched on cost Uncle Sam a third of a billion dollars.

And the other fatigue — the one felt by the Taliban — mostly distinguished by its absence; they felt only the tirelessness of their cause.

Sometimes the occasional jolt reminds the world that the war is still ongoing. The conflict, begun initially to oust the Taliban that sheltered al Qaeda chief Osama Bin Laden after the September 11, 2001 attacks on the U.S., has cost the lives of more than 3,500 Coalition service members and tens of thousands of Afghan civilians.

This week, Afghan troops, after months of fury at poor supplies and low morale, fell back from two vital positions in the volatile Helmand province. It leaves Lashkar Gah and Sangin as the major strongholds the government still holds, and a sense of foreboding that the opium-rich southern region will eventually entirely belong to the Taliban.

The war also moved back into focus three weeks ago with the death of Wasil Ahmad. Wasil learned firearms and commanded a unit of anti-Taliban fighters briefly, before Taliban gunmen on a motorbike mowed him down as he bought food for his mother and siblings. Wasil was just 11 years old.

Before the Coalition came

Known as the “graveyard of empires,” Afghanistan has a reputation for humiliating would-be conquerors. Both the Soviets, in the 1980s, and the British, during the 19th century, were forced to beat bloody retreats from Afghanistan, deprived of what looked, on paper, to be easy victories. 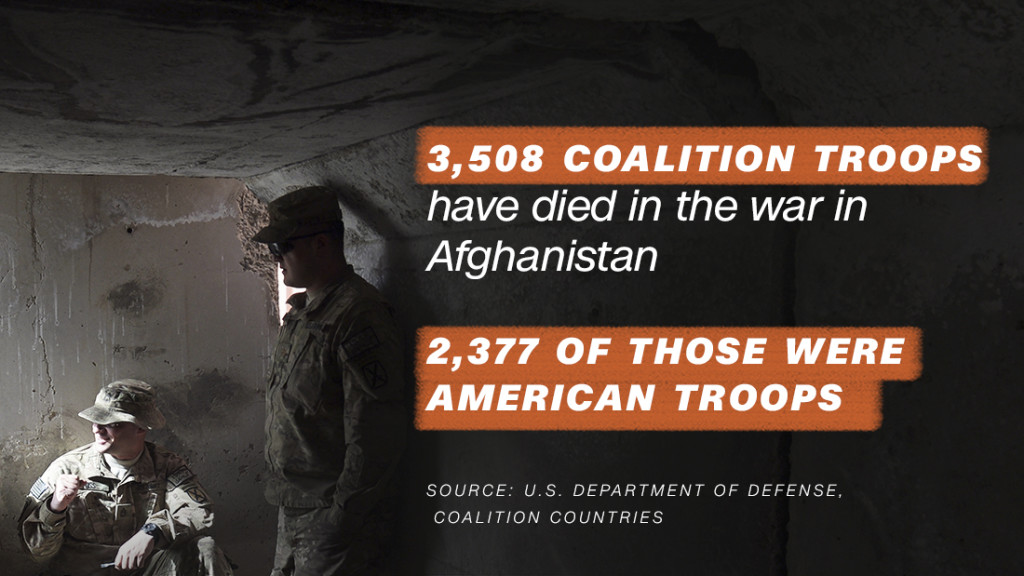 Time has changed the definition of what people nowadays call an “empire,” but not this perception. The U.S. military liked to feel wise as they repeated the maxim that they had the “fancy watch, but the Taliban had the time.” In truth, the American watch ran out of batteries, leaving the Taliban owning both the aphorism and the clock.

The rise of the Taliban before 9/11 owed much to the country’s ethnic divides. In the civil war that followed the withdrawal of Soviet troops in 1989, Pashtun forces swept in from the south, towards the capital Kabul, and pushed the Tajiks back to the north.

The U.S. special forces harnessed the losing side in that civil war, and other purchasable warlords, to oust the Taliban from Kabul. There they installed the smooth and charismatic Hamid Karzai as president, who battled through the country’s myriad complexities to bring it together. Bin Laden was on the run; so was the Taliban, some of them hiding in Pakistan. For a little while.

Time passed. The U.S. invaded Iraq in 2003. The Taliban found its feet again. The U.S. began to get mired in Iraq. The insurgency picked up. The Afghan government started losing ground. By 2008, it was a full-on emergency and the U.S. realized — even from the liberal anti-war perch of President Barack Obama — that this was the “just war” that it must fight.

And then, the war ramped up

For about three years, there was intense focus. First came the surge. Up to 100,000 U.S. troops (as part of a NATO force) at one point, pressing into the darkest Taliban valleys. Holding ground — spending millions every month to maintain a presence in tiny dusty villages in faraway places like Kandahar to show the insurgency the U.S. had the resolve.

But it was never going to last. In fact, that was always an advertised part of the plan: the U.S. and NATO would hold the land for a few years — until they thought the Afghan troops were ready — and then they would pull out. The Taliban had to hope the Afghans wouldn’t be ready, and just wait. It seems they did. 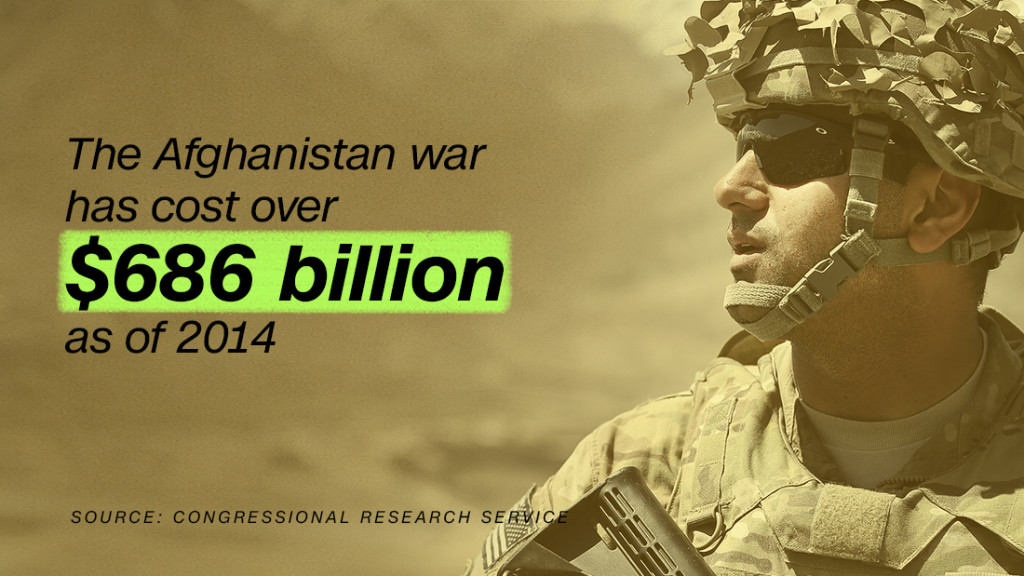 Secondly, came the budgets: $110 billion spent in the largest reconstruction effort in U.S. history. Some new roads that made life in some towns viable again, but also buildings that always stood empty, and an injection of cash into Kabul so unrealistic, unprecedented and absurd that the cost of living became almost reckless.

At one point the World Bank suggested more than 90% of Afghanistan’s total budget was aid-dependent. (I got a very quick call from the U.S. Embassy telling me this wasn’t true — no alternative figure was offered). Housing for Afghans became more expensive — some rents have now dropped by almost half. From behind the concrete blast walls where foreigners mainly lived, a (small) can of black market Heineken at one point cost $10. America had no shortage of cash, just a shortage of viable ways to spend it, resulting in some daft projects and a brief pocket of total imbalance in the Afghan economy.

Thirdly came the leadership. U.S. Secretary of Defense Robert Gates fired the military commander of the NATO-led security mission in Afghanistan ISAF, David McKiernan, in 2009 and replaced him with Stanley McChrystal, a special forces veteran.

McChrystal’s bleak assessment of the war was damning enough to suggest the Green Beret knew the scope of the challenge. He had a plan — and it was leaked quickly enough to back the White House into a corner that involved a large commitment of resources. It involved talking to Afghans, and winning them over. Troops would get out and meet people. For a moment, it seemed to work. 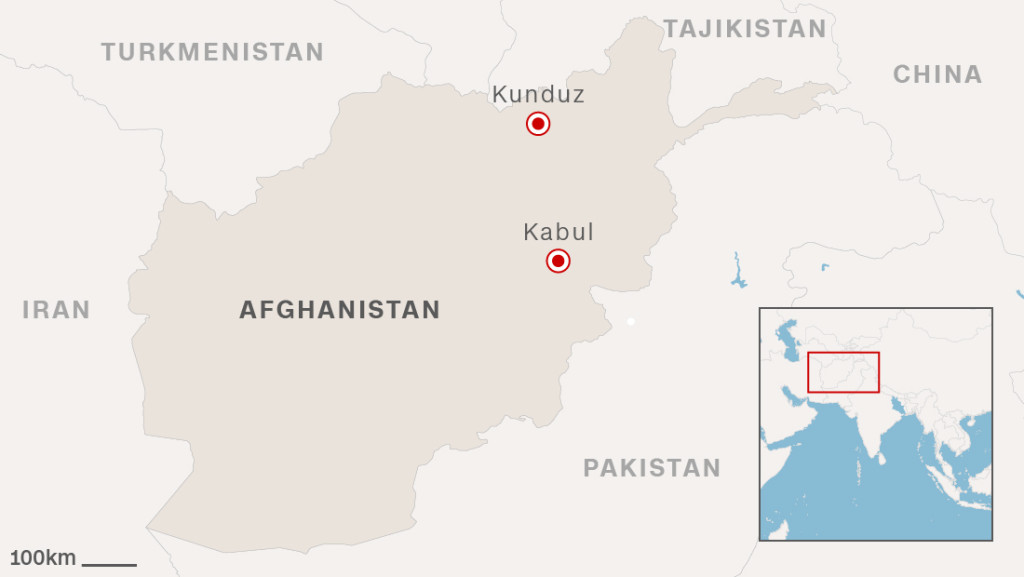 Then the bizarre happened. Eyjafjallajökull, a volcano in Iceland erupted in 2010, scattering ash into the atmosphere and grounding aircraft. McChrystal and his team were among those delayed, along with a Rolling Stone reporter. They spoke their minds, found themselves in print, and McChrystal was fired. From that point, the war felt like it changed. Forever.

David Petraeus swept in that year as McChrystal’s successor — a career general, mindful that the clock was ticking on the surge. The campaign focused on the message and that clock. Petraeus was succeeded by another Iraq veteran, John Allen, whose role was about cleaning up. The surge had almost worked, but been interrupted, caught short, and now America was leaving.

Between January and May 2012, every day seemed to bring a new calamity to the U.S. military presence. From Qurans burned apparently in error; to the corpses of Taliban fighters urinated on by Marines who filmed themselves as they did it; to a massacre by an American soldier in a Kandahar village. Even the most footsure NATO spokesman seemed to lose faith.

So what was achieved?

Well, at one point, al Qaeda was said to be in its mere hundreds in Afghanistan — hiding away in the eastern hills. Bin Laden had been killed in Pakistan. A few thousand Afghans became absurdly rich on the U.S. presence. Far many more thousands (there is no real, reliable figure) died or were injured.

Women saw a brief moment when Western aid programs and ideals let them think about lives outside of the home, where they could flourish. (They still can think about that, but now risk more than ever brutal reprisals from conservatives). The West flooded the country with money and weapons to the point that it is now a land of warlords on steroids.

The Afghan army, briefly, swelled. But it could never hold the ground NATO did. NATO advisors would swear blind that you were wrong, that the ramshackle units you saw could defeat a hungry and angry local insurgency. But it became clear they were misinformed. That an inner malaise — corruption — would undo the Afghan National Security Forces, whose upkeep has cost the U.S. taxpayer well over $60 billion, and whose brave losses continue now at an unprecedented speed.

Two stories stick out of Afghans who are not where the West told them they would be. The first is Gulnaz, the woman who was raped, then jailed for adultery because her attacker was married, then told she would have to marry him. International pressure led to her release into a shelter for women, but three years later I found her living with her attacker, and married to him — the only way Afghanistan’s at times backwards world could find to reconcile the crime against her.

Second is Wahid. He commanded an Afghan army unit, fighting fiercely in Kunduz against the Taliban. They had little support, he alleged, even ammunition, and the dead bodies of their fallen comrades were left to rot in their besieged base. So he fled — dodging bullets in Iran, taking the boat to Greece, and enduring tear gas near Hungary. He is exactly the sort of Afghan the West promised a future to and needed to stay where he was — defending his country. We found him eating a muffin in a café in Munich, Germany.

Where are we now?

The dissent in the ranks of the Taliban has led to ISIS becoming a radical, brutal and attractive alternative to the country’s disenfranchised youth, for whom the old insurgency isn’t moving fast enough.

According to the U.S. Special Inspector General for Afghan Reconstruction (SIGAR — the U.S. government’s money watchdog there), the Taliban hold more territory now than at any time since 2001. There are about 10,000 U.S. troops left, who can hunt extremists, but not hold territory. And it seems neither can the Afghan army at times. It is losing fast in Helmand. It lost Kunduz temporarily in October. If you suggested either of these losses were remotely possible two years ago, most NATO advisors would accuse you of mild insanity.

In terms of Western goals — things are right back where they started: needing to keep Afghanistan free of extremists and a viable country for its people. Without that the result is thousands of refugees in Europe, and ISIS gets a new safe haven. What is left is a country where the West is discredited as unwilling to stay the course; where most fighters are meaner, better armed, and more chaotic than they were in 2001; and whose name causes opinion-formers in the West to try and change the subject.

It was dubbed the Just War, then the Forever War. Now many want it to be the Forgotten War.

But it is still a war, and the West owns a lot of it.

Nick Paton Walsh is a CNN Senior International Correspondent who has reported from Afghanistan frequently over the last 10 years.