In Israel, Racism Is the Law

Successive Israeli governments since 1948 are responsible for the institutionalised discrimination against Palestinians. 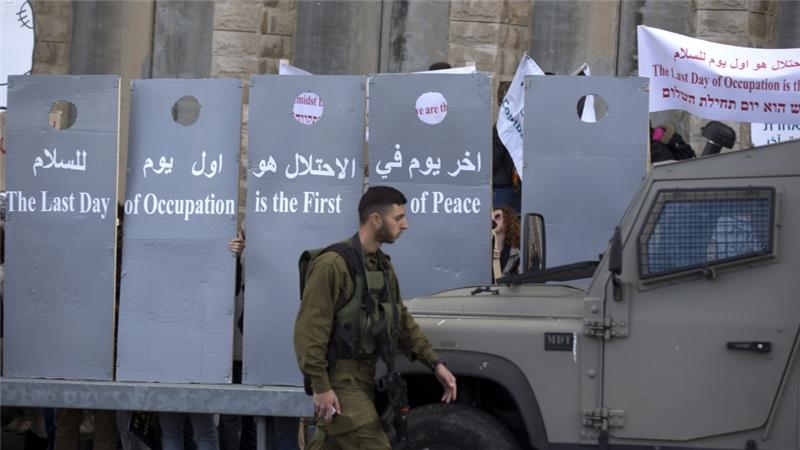 Some 4.5 million Palestinians live under an Israeli military regime in the West Bank and Gaza Strip, an occupation that has lasted for 49 of the state’s 68-year history, writes White [EPA]

25 Feb 2016 – On January 3, two Palestinians were removed from an Aegean Airlines flight from Athens to Tel Aviv, after Jewish Israelis claimed that they constituted a “security risk”. The incident made headlines worldwide. A month later, a Tel Aviv-based cleaning company sparked outrage with a flyer that priced its staff based on ethnicity. The story was also covered around the world.

For some, these kinds of episodes are proof of the racism that critics claim permeates Israeli society; for others, they are examples of isolated bigotry and idiocy. In fact, neither interpretation is quite right. While stories resonate and go viral, they can mask the fact that in Israel racism is the law.

First, inequality in Israel is institutionalised. Contrary to a widely held perception, there is no guarantee of full equality for Jewish and Palestinian citizens; as the Association for Civil Rights in Israel put it, “the right to equality is not yet enshrined in law regarding most aspects of life.”

“Equality cannot be recognised on the constitutional level,” wrote legal academic Aeyal Gross, since that would challenge “the inequality created by the complete identification of the state with only one group.”

The nearest that Israel’s foundational legislation comes to a specific commitment to equality is Basic Law: Human Dignity and Liberty, adopted in 1992 – Israel does not have a formal, written constitution but a number of “Basic Laws” passed over the years deal with key issues.

Yet even here, equality is not “recognised as an independent right that stands on its own”. In fact, just in the past month, the Knesset voted against a draft bill that called for the inclusion of an equality clause in Basic Law: Human Dignity and Liberty.

Furthermore, the Basic Law allows for rights to be violated “by a law befitting the values of the State of Israel”, a caveat that provides a basis “for giving significant weight to the nature of Israel as a Jewish state and its goals, at the expense of the fundamental rights concerned”.

In the words of former Supreme Court President Aharon Barak: “Israel is different from other countries. It is not only a democratic state, but also a Jewish state.” In other words, Israel is not a state of all its citizens, something freely admitted by senior officials.

Second, Palestinian citizens of Israel face systematic discrimination in law and policy – as these examples in land and housing, family life, and immigration demonstrate.

In 43 percent of Israeli towns, residential admission committees filter out applicants on the grounds of “incompatibility with the social and cultural fabric”. These committees, which operate by law, are “used to exclude Arabs from living in rural Jewish communities”, as Human Rights Watch has noted.

In 2014, the Supreme Court rejected a petition against the committees, a ruling slammed for having legalised “the principle of segregation in housing”. These small communities also “exercise control over a significant amount of land” through the regional councils of which they are part.

Palestinian citizens also face discrimination when it comes to family life. The Citizenship and Entry into Israel Law, first adopted in 2003 (PDF), “imposes severe restrictions on the right of Israeli citizens … to apply for permits for their Palestinian spouses and children from the Occupied Palestinian Territory to enter and reside in Israel for purposes of family unification”.

This law, which has the effect of dividing Palestinian families and separating spouses, has been described by a senior European Union official as establishing “a discriminatory regime to the detriment of Palestinians in the highly sensitive area of family rights”.

Israel’s Supreme Court upheld the law in 2012, stating (PDF): “human rights are not a prescription for national suicide”, putting its stamp of approval – not for the first time – on a “racist law“.

For the former Prime Minister, Ariel Sharon, the law was about “demographics”. “There is no need to hide behind security arguments,” he admitted. “There is a need for the existence of a Jewish state.”

Israel’s Law of Return, Absentee Property Law, and the Citizenship Law, passed in 1948-1950, created a reality whereby any Jew in the world can move to Israel and claim citizenship, while expelled Palestinian refugees were stripped of citizenship and are still unable to return.

Israel’s law “creates three tracks of naturalisation“: the highest track for Jews, a second track “for non-Jewish foreigners, who can apply for Israeli residency status through a process of individualised interviews and background checks”, and the lowest track for “Palestinian/Arab/Muslim spouses of Palestinian citizens of Israel who are prohibited from entry for the purpose of family unification”.

Third, 4.5 million Palestinians live under an Israeli military regime in the West Bank and Gaza Strip, an occupation that has lasted for 49 of the state’s 68-year history. In other words, one in three of the population in territory under Israel’s control is not a citizen and is subject to military, not civil, law.

It is important to remember that the territory occupied by Israel since 1967 is not, in practice, distinct from the rest of the state: land has been expropriated, 600,000 Jewish Israelis live in more than 200 colonies, natural resources are exploited, and basic infrastructure – water, telecommunications, transport – all bind the West Bank to pre-1967 territory.

The Palestinians in the West Bank and Gaza Strip, under military rule within this de facto single state, are subjected to severe policies of discrimination and segregation, as well as military brutality and repression. This is no secret: as Human Rights Watch stated in 2010.

“Palestinians face systematic discrimination merely because of their race, ethnicity, and national origin, depriving them of electricity, water, schools, and access to roads, while nearby Jewish settlers enjoy all of these state-provided benefits.”

To enforce this “two-tier system”, the Israeli military conducts nightly raids, detains Palestinians without trial or charge, tortures detainees, and represses any kind of resistance – including unarmed protests – with lethal violence.

Who is responsible for all of the above – for the institutionalised discrimination, the racist laws, and military rule over 4.5 million Palestinians? Successive Israeli governments since 1948.

The crude racism of private individuals – whether on a Greek plane or at a Tel Aviv cleaning company – might get the headlines, but it is the Israeli state and its institutions that created and perpetuates the colonial status quo, and which must be held to account.

Ben White is a freelance journalist, writer and activist, specialising in Palestine/Israel.