‘Plan B’ – Not an Enigma: Why the West Is Keen on Dividing the Arabs 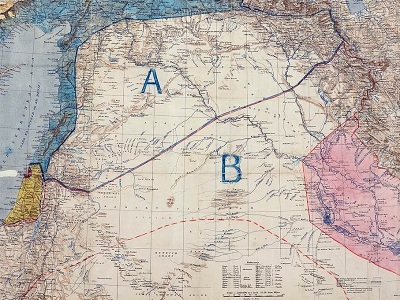 A 1916 map of the Middle East showing French (“A”) and British (“B”) areas of control, according to the secret Sykes-Picot agreement.

1 Mar 2016 – When Arab streets exploded with fury, from Tunis to Sanaa, pan-Arabism seemed, then, like a nominal notion. Neither did the so-called ‘Jasmine Revolution’ use slogans that affirmed its Arab identity, nor did angry Egyptian youth raise the banner proclaiming Arab unity atop the high buildings adjacent to Tahrir Square.

Oddly, the Arabism of the ‘Arab Spring’ was almost as if a result of convenience. It was politically convenient for western governments to stereotype Arab nations as if they are exact duplicates of one another, and that national sentiments, identities, expectations and popular revolts are all rooted in the same past and correspond with a precise reality in the present. Thus, many in the west expected that the fall of Zine El Abidine Ben Ali of Tunisia, especially since it was followed by the abdication of Hosni Mubarak of Egypt, would lead to a domino effect. “Who’s next?’ was a pretentious question that many asked, some with no understanding of the region and its complexity.

After initial hesitation, the US, along with its western allies, moved quickly to influence the outcome in some Arab countries. Their mission was to ensure a smooth transition in countries whose fate had been decided by the impulsive revolts, to speed up the toppling of their enemies and to prop up their allies so that they would not suffer a similar fate.

The outcome was real devastation. Countries where the west and their allies – and, expectedly enemies were involved – became infernos, not of revolutionary fervor, but of militant chaos, terrorism and unabated wars. Libya, Syria and Yemen are the obvious examples.

In a way, the west, its media and allies assigned themselves as gatekeepers of determining, not only the fate of the Arabs, but in molding their identities as well. Coupled with the collapse of the whole notion of nationhood in some Arab countries – Libya, for example – the US is now taking upon itself the responsibility of devising future scenarios of broken down Arab states.

In his testimony before a US Senate committee to discuss the Syria ceasefire, Secretary of State, John Kerry revealed that his country is preparing a ‘Plan B” should the ceasefire fail. Kerry refrained from offering specifics; however, he offered clues. It may be “too late to keep Syria as a whole, if we wait much longer,” he indicated.

The possibility of dividing Syria was not a random warning, but situated in a large and growing edifice of intellectual and media text in the US and other western countries. It wasarticulated by Michael O’Hanlon of the Brookings Institute in a Reuter’s op-ed last October. He called for the US to find a ‘common purpose with Russia’, while keeping in mind the ‘Bosnia model.’

“In similar fashion, a future Syria could be a confederation of several sectors: one largely Alawite – another Kurdish – a third, primarily Druse – a fourth, largely made up of Sunni Muslims; and then a central zone of intermixed groups in the country’s main population belt from Damascus to Aleppo.”

What is dangerous about O’Hanlon’s solution for Syria is not the complete disregard of Syria’s national identity. Frankly, many western intellectuals never even subscribed to the notion that Arabs were nations in the western definition of nationhood, in the first place. (Read Aaron David Miller article: Tribes with Flags) No, the real danger lies in the fact that such a divisive dismantling of Arab nations is very much plausible, and historical precedents abound.

It is no secret that the modern formation of Arab countries are largely the outcome of dividing the Arab region within the Ottoman Empire into mini-states. That was the result of political necessities and compromises that arose from the Sykes-Picot Agreement in 1916. The US, then, was more consumed with its South American environs, and the rest of the world was largely a Great Game that was mastered by Britain and France.

The British-French agreement, with the consent of Russia, was entirely motivated by sheer power, economic interests, political hegemony and little else. This explains why most of the borders of Arab countries were perfect straight lines. Indeed, they were charted by a pencil and ruler, not organic evolution of geography based on multiple factors and protracted history of conflict or concord.

It has been almost one hundred years since colonial powers divided the Arabs, although they are yet to respect the very boundaries that they have created. Moreover, they have invested much time, energy, resources and, at times, all out wars to ensure that the arbitrary division never truly ends.

Not only does the west loathe the term ‘Arab unity’, it also loathes whoever dares infuse what they deem to be hostile, radical terminology. Egypt’s second President, Jamal Abdel Nasser, argued that true liberation and freedom of Arab nations was intrinsically linked to Arab unity.

Thus, it was no surprise that the struggle for Palestine occupied a central stage in the rhetoric of Arab nationalism throughout the 1950s and 60s. Abdel Nasser was raised to the status of a national hero in the eyes of most Arabs, and a pariah in the eyes of the west and Israel.

To ensure that Arabs are never to unite, the west invested in their further disunity. In 2006/07, former US Secretary of State, Condoleezza Rice, made it clear that the US would cease its support of the Palestinian Authority shall Fatah and Hamas unite. Earlier, when, resistance in Iraq reached a point that the American occupiers found unbearable, they invested in dividing the ranks of the Iraqis based on sectarian lines. Their intellectuals pondered the possibility of dividing Iraq into three autonomous states: Shia, Sunni and Kurdish.

Libya was too broken up after NATO’s intervention turned a regional uprising into a bloody war. Since then, France, Britain, the US and others have backed some parties against others. Whatever sense of nationhood that existed after the end of Italian colonization of that country has been decimated as Libyans reverted to their regions and tribes to survive the upheaval.

A rumored ‘Plan B’ to divide Libya to three separate protectorates of Tripolitania, Cyrenaica and Fezzan was recently rejected by the Libyan Ambassador to Rome. However, Libyans presently seem to be the least relevant party in determining the future of their own country.

The Arab world has always been seen in western eyes as a place of conquest, to be exploited, controlled and tamed. That mindset continues to define the relationship. While Arab unity is to be dreaded, further divisions often appear as ‘Plan B’, when the current status quo, call it ‘Plan A’, seems impossible to sustain.

What is truly interesting is that, despite the lack of a pan-Arab vision in Arab countries that experienced popular revolts five years ago, few events in modern history has brought the Arabs together like the chants of freedom in Tunis, the cries of victories in Egypt andscreams of pain in Yemen and Syria. It is that very collective identity, often unspoken but felt, that drives millions of Arabs to hold on to however faint a hope that their nations will survive the ongoing onslaught and prospective western division.

Dr. Ramzy Baroud has been writing about the Middle East for over 20 years. He is an internationally-syndicated columnist, a media consultant, an author of several books and the founder of PalestineChronicle.com. His books include Searching Jenin, The Second Palestinian Intifada and his latest My Father Was a Freedom Fighter: Gaza’s Untold Story.