‘Take My Iraqis and Give Me Some Syrians’ – Europe to Turkey

8 March 2016 – In a yet another violation of international laws and their own human values, 28 European countries have just agreed with Turkey to open a new “bazaar” of refugees, this time using the old barter system. i.e. Iraqis and Afghans in exchange of Syrians.

See what happened: the leaders of the 28 member states of the European Union met on 7 March in Brussels with Turkey’s prime minister, Ahmet Davutoğlu, to bargain a new refugees deal.

According to the summit’s draft agreement, the EU will send back to Turkey all Iraqi and Afghan refugees who came and may come to its territories from Turkish camps, in exchange for taking some of the hundreds of thousands Syrians refugees that are stuck there.

This exchange of human beings includes the payment to Ankara of three billion euro over three years—to be added to other 3,000 billion euro offered to Turkey last November–, and a EU promise to facilitate the entry of Turkish citizens to Europe, let alone the usual rhetoric of thinking of an eventual membership of Turkey in the European club.

Apparently happy with the new deal, Davutoğlu promised to tackle the drama of human smuggling.

“With these new proposals –he said– we aim to rescue refugees, discourage those who misuse and exploit their situation and find a new era in Turkey-EU relations.”

Not a bad deal has it not been of the flagrant absence of the human rights factor. 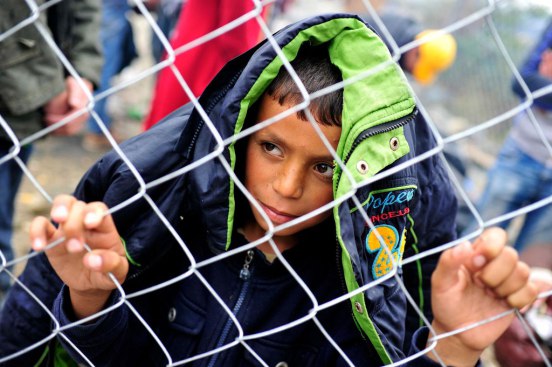 A boy clutches and looks through a chain-link fence, on a rainy day near the Former Yugoslav Republic of Macedonia town of Gevgelija, on the border with Greece. September 2015 Photo: UNICEF/UNI196199/Georgia

Currently, refugees fleeing decades-long wars in Afghanistan and Iraq—two countries that have been invaded by US-Europe led military coalitions, are estimated to account for less than one third of all those heading to Europe escaping wars in the so-called “Greater Middle East.”

IPS talked to a former official at the Spanish Agency for International Cooperation, which depends on the ministry of Foreign Affairs.

“Europe has been betraying its own fundamental values by handling the human drama of refugees in such a mercantilist style,” she said on condition of anonymity.

“We (the Europeans) go everywhere criticising and denouncing lack of democracy and human rights in so many other countries… now these can perfectly blame us for our flagrant hypocrisy… all this is just shameful,” added the former official.

The EU decision to open this new “bazaar” of refugees crowns a series of contradictory measures since last summer.

At first, the European bloc opted for launching a sort of a humanitarian auction through which member states would host nearly one million refugees. Germany won the largest lot.

In fact, last summer, apparently moved by the image of dead body of the three-year old Syrian child Aylan that the waves threw on the Turkish coast, the European countries announced their reediness to host around one million refugees.

Nevertheless, the 28 European Union’s member countries have accepted less than 500 refugees in their territories over the last six months.

Meanwhile, the flow of 4,5 million Syrians, most of them now starving in precarious, improvised camps in Lebanon, Jordan and Turkey, has been be joined by around one fourth of a million Iraqis and Afghans fleeing years of bloodsheds in these two military invaded countries.

In this context, nearly one million refugees have been sailing over the last nine months from Turkey to Greece by fragile boats at the mercy of human traffickers, with the hope of crossing from Greek islands to other European states.

It is estimated that up to 2,000 refugees are arriving on Greek shores every day, most of them from Syria, as well as Iraq and Afghanistan. 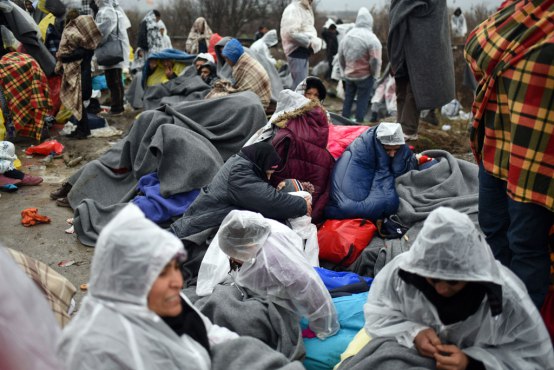 Afghanistan refugees sit huddled under blankets in very cold, wet weather conditions as they wait for permission to cross the border to Serbia from the Tabanovce in the former Yugoslav Republic of Macedonia, where border changes in the Balkan region have created confusion and chaos. Photo: UNICEF/UN010680/Georgiev

No need to comment further on the tragic scenes of refugees’ dead bodies floating in the Mediterranean waters, nor on the images of babies clinging to their mothers, crying in fear of the unknown.

Let alone those orphans abandoned on the shores after their parents drowned in their attempts to cross the rough waters. Everybody has been watching these tragedies everyday on their TV sets.

What happened to the innumerable international treaties and conventions on human rights, the rights of asylums seekers, refugees, migrants and children that the Europeans have been promoting and defending… just for the sake of public speeches?