Why BDS Cannot Lose: A Moral Threshold to Combat Racism in Israel

16 Mar 2016 – A foray of condemnations of the boycott of Israel seems to have fallen on deaf ears. Calls from Western governments, originating from the UK, the US, Canada and others, to criminalize the boycott of Israel have hardly slowed down the momentum of the pro-Palestinian Boycott, Divestment and Sanctions movement (BDS). On the contrary, it has accelerated.

It is as if history is repeating itself. Western governments took on the pro-South African Anti-Apartheid Movement, fighting it at every corner and branding its leaders. Nelson Mandela and many of his comrades were called terrorists.

Once he passed away in 2013, top US politicians vied for the opportunity to list the late African leader’s great qualities in their many press conferences, speaking of his commitment to justice and human rights. However, Mandela’s name was not removed from the US terrorism watch list till 2008. 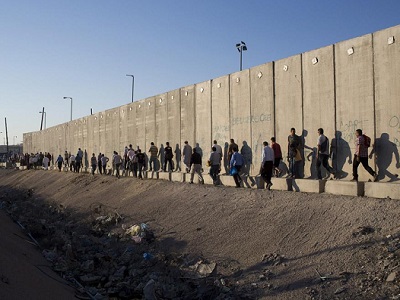 The Reagan administration called the African National Congress – the main platform for the anti-apartheid struggle – a terrorist group, as well. The ANC’s strategy against the Apartheid government was “calculated terror”, the administration said in 1986.

Many South Africans would tell you that the fight for equality is far from over, and that the struggle against institutional apartheid has been replaced by equally pressing matters. Corruption, neoliberal economics, and disproportionate allocation of wealth are only a few such challenges.

But aside from those who are still holding on to the repellent dream of racial superiority, the vast majority of humanity looks back at South Africa’s Apartheid era with revulsion.

The South Africa experience, which is still fresh in the memory of most people, is now serving as a frame of reference in the struggle against Israeli Apartheid in Palestine, where Jews have been designated as a privileged race, and Palestinian Muslims and Christians are poorly treated, oppressed and occupied.

While racism is, unfortunately, a part of life and is practiced, observed and reported on in many parts of the world, institutionalized racism through calculated governmental measures is only practiced – at least, openly – in a few countries around the world: Burma is one of them. However, no country is as adamant and open about its racially-motivated laws and apartheid rules as the Israeli government. Almost every measure taken by the Israeli Knesset that pertains to Arabs is influenced by this mindset: Palestinians must remain inferior, and Jews must ensure their superiority at any cost.

The outcome of Israel’s racist pipe dream has been a tremendous amount of violence, palpable inequality, massive walls, trenches, Jews-only roads, military occupation, and even laws that outlaw the very questioning of these practices.

Yet, the greater its failure to suppress Palestinian Resistance and to slow down the flow of solidarity from around the world with the oppressed people, the more Israel labors to ensure its dominance and invest in racial segregation.

“The whole world is against us,” is quite a common justification in Israel itself, of the international reaction to Israel’s Apartheid practices. With time, it becomes a self-fulfilling prophecy and feeds on past notions that are no longer applicable. No matter how many companies divest from Israel – the latest being the world’s largest security corporation G4S – and, no matter how many universities and churches vote to boycott Israel, Israeli society remains entrenched behind the slogan and its disconcerting sense of victimization.

Many Israelis believe that their country is a ‘villa in a jungle’ – a notion that is constantly enforced by top Israeli leaders. Right-wing Prime Minister, Benjamin Netanyahu, is purposely advancing the crippling fear in his own society. Unable to see the unmistakable crimes he has carried out against Palestinians for years, he continues to perpetuate the idea of the purity of Israel and the wickedness of everyone else.

In February, he spoke of the need to create yet more fences to keep his ‘villa in the jungle’ safe, and, to quote, “to defend ourselves against the wild beasts” in neighboring countries. The statement was made only a few weeks before the launch of the annual Israel Apartheid Week in numerous cities around the world. It is as if the Israeli leader wished to contribute to the global campaign which is successfully making a case against Israel as being an Apartheid state that ought to be boycotted.

Israel is, of course, no ‘villa in the jungle’. Since its inception over the ruins of destroyed and occupied Palestine, it has meted out tremendous violence, provoked wars and harshly responded to any resistance carried out by its victims. Similar to the US and the UK designation of Mandela as a ‘terrorist’, Palestinian Resistance and its leaders are also branded, shunned, and imprisoned. Israel’s so-called ‘targeted killings’ – the assassination of hundreds of Palestinians in recent years have often been applauded by the US and other Israeli allies as victories in their ‘war on terror.’

Comforted by the notion that the US and other western governments are on their side, most Israelis are not worried about exhibiting their racism and calling for more violence against Palestinians. According to a recent survey conducted by the Pew Research Center and revealed on March 08, nearly half of Israel’s Jewish population want to expel Palestinians to outside of their historic homeland.

The study was conducted between October 2014 and May 2015 – months before the current Intifada began in October 2015 – and is described as a first-of-its-kind survey as it reached out to over 5,600 Israeli adults and touched on myriads of issues, including religion and politics.  48% of all Israeli Jews want to exile Arabs.  However, the number is significantly higher – 71% – among those who define themselves as ‘religious’.

What options are then left for Palestinians, who have been victimized and ethnically cleansed from their own historic homeland for 68 years, when they are described and treated as ‘beasts’, killed at will, and suffer under a massive system of apartheid and racial discrimination that has never ceased after all of these years?

BDS has, thus far, been the most successful strategy and tactic to support Palestinian Resistance and steadfastness while, at the same time, holding Israel accountable for its progressively worsening policies of apartheid.  The main objective behind BDS, an entirely non-violent movement that is championed by civil society across the globe, is not to punish ordinary Israelis, but to raise awareness of the suffering of Palestinians and to create a moral threshold that must be achieved if a just peace is ever to be realized.

That moral threshold has already been delineated in the relationship between Palestinians and South Africans when Mandela himself said, “We know all too well that our freedom is incomplete without the freedom of the Palestinians.”

He was not trying to be cordial or diplomatic. He meant every word. And, finally, many around the world are making the same connection, and are wholeheartedly in agreement.